Will My Cats Ever Be Friends Again?

Buster went to the vet earlier this week with an upper respiratory infection, but his bonded pal, Katie stayed home. The vet said it was just a virus and would run its course. Once we were home, Katie threw a fit, hissing, growling and swatting — even at my husband and me — so we separated the cats and have been rotating who has the run of the house and who is in a room, making sure both get attention and plenty of love. (As a side note, Buster is the more submissive of the pair.) Buster seems to love the room, since he usually sleeps in there anyway. But last night, he seemed sad when he was exploring the rest of the house. I think he misses his friend!

Last night I started giving Katie some Bach Rescue Remedy. She seemed calmer and has not hissed at my husband and me. She did hiss once when I took her downstairs after Buster had been down there. I hope to reintroduce them tonight, using your guidance for introducing a new cat. But it breaks my heart to see them not getting along after three years. Any other advice, dear wise kitties? 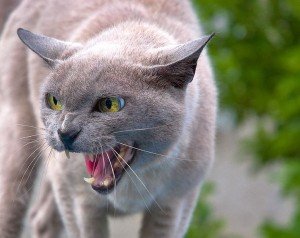 Siouxsie: Aww, Linda, it’s so sad when beloved kitties start hating each other because of a trip to the vet. But we do think we can help you help Buster and Katie start getting along again.

Thomas: The reason cats sometimes freak out after one goes to the vet is because they smell like the vet instead of family members. And sometimes, that negative association can continue long after the unfortunate vet patient returns.

Siouxsie: And Katie, on her part, has gotten into a reaction pattern of being aggressive when Buster acts like a victim.

Thomas: So what can you do to change this dynamic?

Kissy: You’ve got to get them having fun together so they start making good memories again!

Siouxsie: And the best way to do that is by playing with them in the same room.

Thomas: Not only will that help Katie get her ya-yas out and direct her aggression in the right way, but it’ll give her pleasure.

Kissy: And Buster will start regaining his confidence when he exercises his hunting skills.

Siouxsie: And when the two of them are all tired out, they may be able to share the same space in peace.

Thomas: In order to do this, you and your husband are each going to have to use an interactive toy like a feather wand or a mouse on a string — basically, anything that gets them excited and gets them into hunting mode.

Siouxsie: If you’ve installed the screen door, you can start with letting each cat play in “their” space.

Thomas: Ideally, you’ll play with them before they eat. Then feed them on either side of the screen door, maybe six feet apart or so at first. When they play and then eat (safely, because the screen door is separating them), they’ll soon go to sleep. That’s the cat cycle: hunt, kill, eat, groom, sleep.

Kissy: If they show evidence of getting along okay when eating and playing on opposite sides of the screen door, move their dishes a little bit closer together. Continue doing that until they’re eating right next to each other but separated by the door.

Siouxsie: The next step will be to for you and your husband to play with them in the same space. Do your best to make sure both cats don’t end up going for the same toy. Then feed them on opposite sides of that room. Try moving their dishes a tiny bit closer each day, and be sure to be alert for any evidence that Katie is trying to steal Buster’s food.

Thomas: You may have to chaperone a little bit at first in order to keep any food stealing from happening. But gradually Buster will come into his own again and Katie will start realizing this is her pal.

Kissy: It may take a very long time for the two of them to get along as well as they used to, but by doing this, you can hopefully get them tolerating one another again.

Siouxsie: Good luck, Linda. We hope this helps you — and we especially hope that it helps Katie and Buster learn to like each other again.