Why is my deaf cat suddenly so aggressive?

I have a deaf cat who hasn’t been right since his brother went to the Bridge. Ever since he was a kitten, he used to be very well behaved, but for the last month he has been extremely obstinate: he seems to do things intentionally, like getting on the counter and pawing things off, or picking fights with the other cats. He’s turned in to an uncontrollable mad cat. I’ve taken him to the vet and she said there’s nothing medically wrong with him. He doesn’t respond to the spray bottle anymore, it’s like he’s laughing at me for trying. Though I’ve worked with MANY cats over the years, he is my first deaf one. The thing that has me really worried is his sudden aggression towards the other kitties, as he is much bigger than most of them and I’m afraid he’s really going to hurt one of them. Any advice on how to deal with my hard-headed deaf boy would be greatly appreciated.

Siouxsie: It sounds to us like there are two things going on here. First, the death of a beloved companion, animal or human, is one of the greatest stresses a cat can ever endure. The grief, anger, and sense of loss is just as great in a cat as it is in any other living creature, including people. Secondly, your deaf kitty is probably pretty scared.

Thomas: It’s possible that your deaf cat’s brother helped him compensate for his disability. Without his helpmate, he may not know what to expect from his environment. We suspect that his aggressive acting-out with his feline housemates is due to fear.

Dahlia: Fear aggression and anger aggression can seem very similar to humans because both types start with growling and hissing and end with fighting. But there are body language cues you can look for to help you determine whether your cat’s aggression is fear-based or anger-based.

Siouxsie: The cat in this photo is showing fear aggression. Her ears are down and back, her pupils are dilated, and she’s crouching low. She’s in a corner and doing her best to get whatever is threatening her to go away.

Thomas: If the interloper doesn’t leave, she will start fighting because she feels the need to defend herself against whatever is coming her way.

Dahlia: You can detect fear aggression before it reaches this stage, where a fight is imminent. In the early stages of fear aggression, you’ll see the fearful cat turn sideways to his potential attacker and the fur on his tail will stand up on end. These are efforts to appear as big as possible. 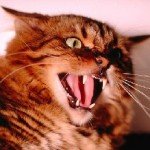 Siouxsie: In anger aggression, on the other hand, the aggressor directly faces his opponent. He stands stiffly, with his back end higher than his front end. His ears are down, but they’re stuck out sideways like airplane wings rather than flattened back against his head.

Thomas: An angry cat’s pupils are narrow, and his tail lashes back and forth.

Dahlia: Most cats conflicts are resolved with hissing and swearing before they reach the point of actual fighting. Cats have a very strong “fight or flight” reflex, and a fearful cat would much rather run away than engage in a fight. But if he doesn’t think he has any other choice, the claws and teeth will come out.

Siouxsie: As you can imagine, a deaf cat may feel he has a lot to fear from an environment where he’s suddenly lost his best friend and he has no idea how the other cats will treat him. Even relatively innocuous gestures can seem like potential attacks to a cat that’s already scared and stressed.

Thomas: So, what can you do about the aggression? First, don’t try to pull the cats apart if they’re already fighting. Since both participants are really charged up, they may bite at whatever is near them, including your hand or arm. The best thing to do if the cats are already fighting is to take a broom and sweep them apart.

Dahlia: If it looks like a fight is about to happen, try distracting the cats. Stomp your foot and clap your hands so that the deaf cat and the hearing cat have some kind of distraction.

Siouxsie: As for your deaf cat’s special needs, we’d suggest that you provide him with a safe space where he can count on being alone and unmolested. If he starts feeling safe again, he’ll start regaining his confidence. The safe room will give him a chance to get used to navigating his world without his brother.

Thomas: You can do this by putting him in a room with two or three baby gates stacked up in the doorway so that he’s not completely isolated, but he can feel confident that no other cat is going to come into his space.

Dahlia: Don’t leave him in there all the time, of course, but try  “putting him to bed” in that room overnight or while you’re at work so he can have some peace and quiet while you’re away. You’ll want to leave him food, water, a litterbox, a comfortable bed (this can be as simple as a favorite blanket on a couch or bed that’s already in the room), and a few toys.

Siouxsie: If the cats get into a fight while you’re home, put the deaf cat into a quiet, calm room where he can relax. In this case, you can close the door behind you and let him and his opponent chill out for about half an hour.

Thomas: We’d recommend that you get some Feliway diffusers and put them in rooms where your cats hang out together. Feliway is a feline pheromone analogue that releases hormones that help cats to relax. Humans seem to think that if there is a scent, it’s barely detectable, if it’s detectable at all. Our last vet had Feliway diffusers in all the cat exam rooms.

Dahlia: Finally, be sure to give your deaf cat lots of love and comfort. Open your heart to him and allow him to feel your grief and loss, too, and (even if this sounds silly) “tell” him with your thoughts that you understand his grief, that you love him, and that you hope he’ll be kind to his feline housemates. Make sure to frame your thoughts in a positive way. Don’t tell him “don’t fight,” for example, because he’ll get the “fight” part but not the “don’t” part. It’s much easier for a human to visualize a desired act, like kindness and affection, than it is to visualize not doing something.

Siouxsie: However, don’t comfort him directly after he does things you don’t want. This will reinforce the negative behavior. If he gets in a fight, don’t hold him and comfort him right afterward. Instead, put him in a room where he can calm down. If he starts cussing at another cat while he’s on your lap, put him on the floor.

Thomas: Good luck, Michelle. We hope this helps. Please let us know how things turn out.