Why Is My Cat Scared of Her Toys?

My cat is approximately 5 years old. I adopted her from the ASPCA over a year ago. She seems to be afraid of her toys — the ones with little stuffed animals or feathers hanging from sticks — and runs away when I try to play with her. She prefers to pounce on my arm and grip it, play biting it. How can I make sure she is getting enough stimulation and exercise without sacrificing my arm? 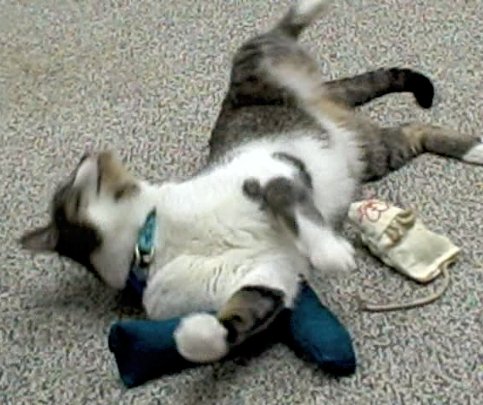 Play is super-important for happy (and well-behaved) cats.

Siouxsie: This is an odd situation, Maureen, but we think we can help. We cats do love to play, but there’s a right way and a not-so-right way to play with us.

Thomas: A lot of people think they can play with their cats like they’d play with a dog — that is, getting them all riled up and excited by waving toys at them or perhaps even putting those toys near their faces. That doesn’t work so well for cats.

Dahlia: When you play with your cat, you need to exercise her prey drive.

Siouxsie: Think about the kinds of critters we hunt: Mice and birds. Some cats are “mousers” and some cats are “birders,” and you’ll find out which one your cat is when you play with her.

Thomas: Mice move along the ground in uneven jerks, sometimes standing still. They often seek shelter or move in quiet places. If you use a toy with a stuffed animal on the end, or even just a plain old six-foot-long shoestring, use these kind of motions.

Dahlia: Birds also move around on the ground, but then they suddenly take off. When you play with a feather toy, use this kind of motion.

Siouxsie: Most importantly, don’t wave the toy right in your cat’s face or aim it at her head. That will scare her and she won’t want to play with you.

Thomas: Start out by dragging the toy along the floor, several feet away from her, using slight jerking motions to attract her attention. You’ll probably notice that her eyes will start following the motion of the toy. If you keep doing this, making the toy’s movement unpredictable, she’ll get into a crouched pose. You might see her tail starting to twitch a little bit. Then her muscles will tense … and bam! She’ll be on the toy!

Dahlia: Make the toy “struggle” for a few seconds as she wraps her paws around it and bites it, and then let it “die.”

Siouxsie: When you play like that, you’re engaging her whole prey cycle: hunt, catch, kill. You can make the experience even more awesome by giving her a small treat afterwards so she gets to eat once she’s killed. (But keep the treats very small in size and adjust her regular feedings to compensate for the extra calories so she doesn’t start gaining weight.)

Thomas: As for what you can do about your kitty stalking and “killing” your arm, think about what kind of motions you’re making when she goes after your limbs. Are you making small motions like typing on a keyboard, knitting, writing or drawing? If so, she may be attracted to the motion of your fingers, the pencil, the knitting needles or the string.

Dahlia: What that’s telling you is that her prey drive is not being sufficiently exercised. If you’re able to play properly with your cat, so that your attempts to play with interactive toys don’t frighten her, you’ll be able to burn off a lot of that extra energy and it’s very likely that the arm-attacking behavior will stop.

Siouxsie: When she does attack you, cry “ow!” in a high-pitched but not excessively loud tone, and put her on the floor. This “ow! and down” technique has been very successful, particularly with kittens. The high-pitched squeak is a tool kittens use to tell each other that the play is getting too rough.

Thomas: Jackson Galaxy, cat behaviorist extraordinaire and star of the Animal Planet show My Cat From Hell, made this short video on how to properly play with your cat. This could be helpful, too.