Why Don’t My Kittens Purr For Me?

I found Diva and Tater on Craigslist. They were 9 weeks old at the time, and they were healthy and happy. I brought them into a household with one 4-month-old rescue female kitten from a vet’s office. It was instant adoration! They thought of Gracie as “Mom.” They “nursed” on Gracie, who was a fixed female by then, and she seemed to love it. Both of the kittens purred and purred, loud and clear, whenever they were near Gracie. But when they weren’t near Gracie, I never heard them purr. Ever. Even when they’re being loved on or being fed, they never made a peep. I tried putting my ear to their throats when they were “smiling” — nothing! They are now 10 months old and they’ve long since stopped trying to nurse, so I never get to hear that soothing, calming purr I get from Gracie. I’ve had cats all my life, and I’ve never had one that didn’t purr. Have you ever run into this weird quirk before? Will they always be this way? 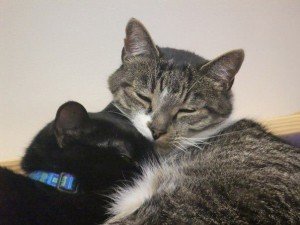 Cats don't always purr when they're delighted. Sometimes they just "smile" and snuggle.

Siouxsie: Good question, Charlene.  As a long-time cat caretaker, I’m sure you know about the whys and wherefores of purring, but we’ll explain it briefly for our readers who may not .

Thomas: Purring is an instinct. Kittens are born knowing how to purr, and they do so while nursing. The mother cat purrs right back at them.

Dahlia: Purring is not only a measure of contentment, but it functions as a relaxation tool. Cats can purr when they’re in pain, and sometimes even when they’re dying, because the sound of the purr seems to release endorphins — natural painkillers.

Siouxsie: In any case, because kittens instinctively purr when they’re nursing, it’s not surprising that Diva and Tater would have purred loudly as they were nursing on their big sister, Gracie. Not only was the behavior hard-wired, but it probably soothed them while they were making the transition to their new environment.

Thomas: There are all kinds of purrs, and a wide variation in the loudness of those purrs. Some cats literally have “motors,” which you can hear from feet away, while some purr so quietly as to be inaudible to humans.

Dahlia: Sometimes the only way you can tell a cat is purring is to hold your finger over his throat to see if there’s a vibration.

Siouxsie: Also, just because a cat doesn’t purr, that doesn’t mean he’s unhappy or doesn’t love you. It just means that he doesn’t relate to you in the same way he relates to a mother cat. I’m sitting in Mama’s lap right now and I’m happy as can be — but I’m not purring.

Thomas: If Diva and Tater show you affection in other ways, then they certainly love you and enjoy your company. A “smile” is just as much a gesture of contentment as a purr.

Dahlia: There are times I don’t purr, even when I’m happy and relaxed in Mama’s arms. It’s not because I don’t love her; it’s just that sometimes I want to meditate in blissful silence!

Siouxsie: We don’t know the answer to your question about whether or not they will ever purr audibly.

Thomas: But don’t be surprised if one day when you’re really sick or you’ve hurt yourself badly, they snuggle up next to you and start purring.

Dahlia: A cat’s purr has been measured at a sound frequency of 25 to 150 hertz — a frequency range which has been shown to stimulate bone growth and healing.

Thomas: So, one day you might find yourself the beneficiary of some “purr therapy.”

Dahlia: Even if Diva and Tater never do utter an audible purr, rest assured that if the rest of their behavior says they’re happy, they love you and enjoy your company!