Why Did My Cat’s Ear and Tail Fall Off? 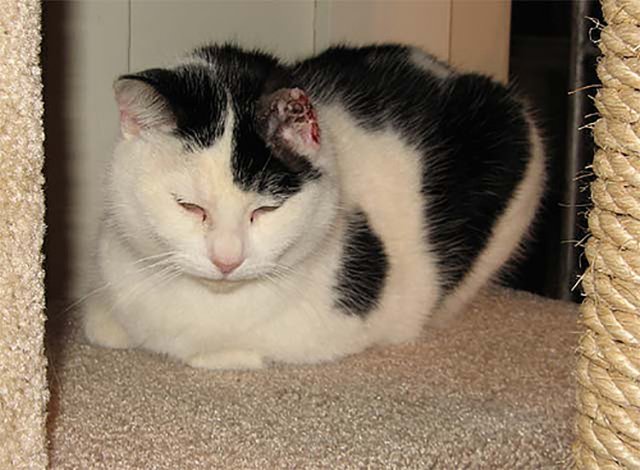 A cat after sugery to remove a cancerous growth on the ear. Photo CC-BY Glen Ivey

My cat, Cooper, is about 12 years old now. About a year or two ago he had this weird thing that happened to his ears and tail. He was an inside cat at this time as well. His ears and tail became crispy and black. My father kept a close eye on him to see if his condition got any worse to make sure he didn’t need vet attention. The condition didn’t change any until one day my father checked him out and his top of his ear was gone and the top of his tail. They fell off! He’s a very healthy cat for his age and this is the only weird thing that’s happened to him. It hasn’t happened again. And he’s alive and well besides missing half an ear and tail. I just want know what would cause that, and would it or could it be a problem in the future with more important appendages like legs?

Thomas: Well, Cayley, we can’t think of that many things that would cause a cat’s ear and tail to turn black and fall off.

Bella: But unfortunately, none of the possibilities are all that good.

Tara: Before we start, please keep in mind that we’re not veterinarians, and even if we were, we wouldn’t ethically be able to diagnose Cooper without seeing him!

Thomas: One possibility is that he got wounds that turned gangrenous — that is, the tissues died and rotted off. But if that had been the case, you and your dad would have smelled a really foul odor. The smell of rotting flesh is like no other stench you’ve ever experienced.

Bella: It’s also possible that Cooper somehow got burned, and the skin died and fell off.

Thomas: The other possibility is something that’s particularly common in light-furred cats, even if they’re indoors only.

Bella: It’s something Mama has seen in our great grammie cat, Iris, who was mostly white with a few calico spots.

Thomas: And that something is a form of cancer called squamous cell carcinoma.

Bella: We don’t mean to scare you, but we have to tell you about it. 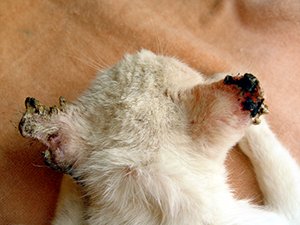 Tara: Just to the left is a photo of a cat with squamous cell carcinoma of the ears. You can see that the ear tips have turned black and have partially fallen off.

Thomas: So, what do you do if Cooper did indeed have cancerous growths?

Bella: The most important thing you can do is take him to the vet and explain what happened a couple of years back. If you have photos of Cooper when he had these black, crusty lesions, you should bring them to show the vet.

Thomas: Cancers can metastasize — that is, they can spread — to other organs and tissues. We don’t think Cooper’s leg is going to fall off if a tumor manifests there, but if you see any other signs of Cooper’s skin getting black and crusty, you absolutely must take him to the vet and get him checked out.

Bella: You’d be amazed at what vets can do to treat cancers these days: there’s chemotherapy, radiation, and surgical treatment available.

Tara: And from what lots of vets have said, cats tolerate chemotherapy a lot better than humans do. And by the way, did you know that veterinary research into cancer and illnesses like FIV actually benefits human health, too?

Thomas: Now, as we said, it’s really important for you not to freak out. You’ve just got to get Cooper in to the vet for a checkup and talk to that vet about what happened. She or he will be able to provide you with the most accurate assessment of whatever condition he had.

Bella: For you other readers, please know that any time you feel a lump or see something unusual on your cat’s skin, it’s critical to take that kitty to the vet and get it assessed. If it turns out to be cancer, it’s most easily treated in the early stages of the disease.

Tara: And then, sometimes it’s not cancer at all. Mama’s felt lumps on her kitties, took them to the vet, and it’s never been anything serious. But Mama says she’s willing to pay for the peace of mind.

Thomas: Have you other readers ever had a cat with skin cancer? What did your vet do to treat it? And if your cat has had black, crusty lesions that were diagnosed as something else, please talk about that, too.