Why Are My Cat’s Paws Sore and Swollen?

We got Rambo from the SPCA almost a year ago. He adjusted very quickly and incredibly well to his new home and is our only pet. A few days after we brought him home, his front left paw got red and sore. A scab-like black crust developed between his toes and around his paw pad, and the skin began to open up and began to smell infected. We took him to the vet, who prescribed antibiotics and a pain reliever and told me to soak it two or three times a day in a solution of antibacterial soap, salt and warm water. When I brought him in for a follow-up a week later, the area between his paw pads looked less sore, but one of his toes had swollen to triple its size. We did the antibiotics and soaking routine again, and he recovered completely. Then his other front paw swelled up, and the soaking routine healed it in about a week.

Now his right rear foot is sore and crusty, and it doesn’t seem to be healing as quickly. His toes are swollen, the skin between his paw pad and toes is starting to open up. The vet says that the next step is a biopsy, and I simply can’t afford it right now. I’ve been told it could be an allergy, but I’m very careful about not using chemical cleaners since I have two toddlers. We use unscented paper pellet litter in his box, and he’s an indoor cat. Rambo is a much-loved member of our family and it worries me sick not knowing what’s wrong with him. 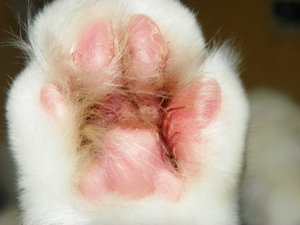 Siouxsie: First of all, Erica, thank you for sending along this photo of Rambo’s paw so we can see exactly what you’re talking about.

Thomas: That’s gotta hurt! My toes are sore just lookin’ at that.

Dahlia: We’d heard somewhere along the line about a disease of the paw pads called plasma cell pododermatitis, so we decided to look on Google to find any images of cats with the condition. There were quite a few, ranging from mild to very severe. But this photo taken by the staff of Olathe Animal Hospital in Olathe, Kansas, bears a striking resemblance to the picture of Rambo’s paw.

Siouxsie: The swelling and secretion in this disorder is produced by plasma cells, which are white blood cells that produce a large amount of antibodies.

Dahlia: But as yet, nobody knows what sort of irritant might stimulate the immune system to overreact in this way.

Siouxsie: To our very non-veterinary minds, that sounds a lot like an allergic response, so whoever’s suggested Rambo might have an allergy could be onto something.

Dahlia: Another possibility is that he could be reacting to something he’s eating.

Siouxsie: Yes, believe it or not, cats can develop skin rashes and inflammation from hypersensitivity to their food! Grains tend to be particularly problematic to cats because we’re obligate carnivores: we evolved to eat meat and we don’t have the enzymes in our bodies to efficiently digest grains.

Thomas: We’d recommend that if you’re not doing so already, you feed Rambo a high-quality canned cat food. The better the quality, the fewer preservatives, nasty meat “digests,” antibiotics, artificial colors and other garbage will be in the food.

Dahlia: You can find the high-quality foods we’re talking about in pet stores and through online retailers — but you won’t find them in the supermarket.

Siouxsie: There are grain-free kibble formulas, too, but — well, we’re cats, so we’ll always advocate for gooshy foods or a raw diet because that’s what we like best.

Thomas: Plasma cell pododermatitis is often treated with high doses of steroids in order to suppress the immune system and calm the overreaction. A drug called pentoxifylline is also used to treat the condition.

Dahlia: Only your vet will be able to tell you for sure whether or not Rambo has plasma cell pododermatitis, and she will need to do that biopsy to figure it out.

Siouxsie: But there’s no harm in talking to your vet and asking her if she thinks it could be pododermatitis. If you show her the Olathe Animal Hospital photo and the photo of Rambo’s paw that you sent us, maybe that would help.

Thomas: We’d also suggest that you ask her if she has some idea about what other conditions could be causing Rambo’s paw issues.

Dahlia: It can’t hurt to explain that you can’t afford the biopsy right now and see if there’s something else you can do to help Rambo feel better while you save up for the procedure. Meanwhile, try changing his food and eliminating any melaleuca-based or evergreen-oil-based cleaners you’re using and see if that helps.