What’s wrong with my wobbly kitten?

I ran a search for cats with Parkinson’s Disease and found this article on your site. I have a new litter of kittens on my farm and one of the three kittens has to have Parkinson’s. Since birth he shakes and wobbles uncontrollably at all times except for when he is sleeping. He can run pretty well, but walking is tough. Eating and drinking can also be challenging. His movements are identical to a human with severe or advanced Parkinson’s, and the fact that he is perfectly still as he sleeps is also typical of human Parkinson’s. If you have any comments I would love to hear them.

Siouxsie: In this case, we’re pretty sure that your cat does not have Parkinson’s Disease. The reason he wobbles so much is most likely due to a condition called cerebral hypoplasia, or CH.

Thomas: This is a kind of brain damage where the cerebellum, the part of the brain that controls the cat’s coordination, is underdeveloped.

Dahlia: Kittens with cerebellar hypoplasia almost always have that condition because they were infected with a virus called panleukopenia (also known as feline distemper) either while they were in their mother’s uterus or shortly after they were born.

Siouxsie: Symptoms of hypoplasia include ataxia (a jerky, uncoordinated gait), and a tendency to overshoot or undershoot when pouncing or reaching for objects. Some cats with hypoplasia have trouble eating because they can’t coordinate themselves well enough to avoid kicking food out of their bowl when they have tremors.  This video shows Gordon, a kitten with cerebellar hypoplasia. You may recognize a lot of your kitten’s symptoms when you watch it.

Thomas: The good news about cerebellar hypoplasia is that it’s not a progressive disease like Parkinson’s. Your kitty’s symptoms will stay at about the same level throughout his life, and as he learns to compensate for his disability you may find that he even does better.

Dahlia: Cats with cerebellar hypoplasia do have some special needs. First of all, they should never be free-roaming outdoor cats: their disability will make it very difficult for them to escape danger such as oncoming cars or predators. 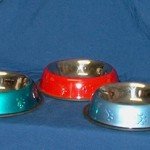 Siouxsie: Because, as you’ve seen, hypoplasia cats can be very uncoordinated while eating, it’s best to use food and water dishes that can’t be tipped over.  Stainless steel dishes that are wider at the bottom and have rubber grips are a good choice. Just don’t forget to remove the rubber ring and wash it periodically.

Thomas: He should have a litterbox that’s high on the sides, but with a low entry. This will be helpful to him because he may need to lean against the side of the box while doing his business. You’ll also want to make sure the litter box is very hard to tip over.

Dahlia: You’ll still have litter scatter, though, so you’ll probably want to put litter catch mats under the box. Plastic carpet runners are very helpful in containing most of the litter. The plastic mat will also make it easier to clean up any accidents.

Siouxsie: Cats with cerebral hypoplasia can have a good life and live as long as any other cat. Cats don’t worry about their disabilities. They don’t spend a lot of time pondering why their littermates can walk easily and they can’t. They just live their lives, and like any other cat, the more love and care they get, the happier they are.

Thomas: This sweet video shows the story of Charley, another cat with cerebellar hypoplasia. It proves what Thomas said: These cats can have long, wonderful lives. You just have to make sure to accommodate their special needs

Dahlia: The thing about cerebellar hypoplasia is that it can be prevented by simply vaccinating your cats on a regular basis. The regular cat vaccination schedule includes a vaccine against panleukopenia, the disease that causes hypoplasia. This is particularly important for cats that will become pregnant (basically, any unspayed female cat).

Siouxsie: You should take your kitten to the vet for a checkup and make sure that CH is what’s causing your cat’s coordination problems. Your vet will also be able to give you more information on how to take care of him. If you’re not in a position where you can take care of his special needs, your vet may be able to help you find a loving home for him.

Thomas: If you’d like to see more detailed information on caring for a cat with CH, we recommend this article from petspeopleplace.com.

Dahlia: Good luck, Katy. And good luck to your special kitten, too.