What’s Wrong With My Kitten’s Eye? 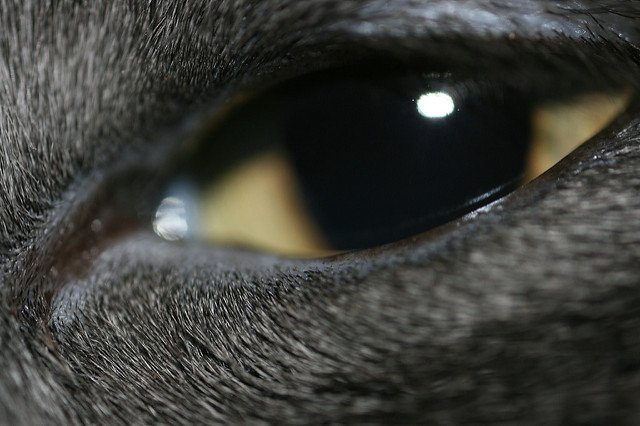 This morning I noticed that my cat, Thibodeaux, had his right eye a bit swollen and he was reluctant to open it. When I got home from school, his eye (both of which are green with gold edges) was a bit yellower than normal. I also noticed a brownish, almost liquid-looking spot almost at the bottom of his eye. I haven’t taken him to the vet yet and I want to know if it’s something serious that he needs to see the vet for. He’s only seven months old and I don’t want him going blind!

Thomas: Well, Erin, this is something for which we’d definitely recommend a trip to the vet!

Bella: We’re not veterinarians at all, but we do know there are a couple of reasons why a kitty might have eye problems.

Tara: First of all, Thibodeaux might have gotten into something that left a scratch on his cornea …

Thomas: … that is, the surface of the eye.

Tara: I was going to say that. *grrrr*

Thomas: Well, hurry up, then! *grrrrOOOOOOO*

Bella: Hey, you two, knock it off!

Bella: Anyway, Erin, a scratch on the cornea isn’t something that should be left alone because you don’t want to run the risk of the scratch getting worse and turning into what’s called a corneal ulcer.

Thomas: Corneal ulcers can be caused by a scratch or from a disease like feline herpesvirus (which isn’t quite like human herpes, and can’t be transmitted to humans), also known as feline viral rhinotracheitis.

Tara: Cats can be infected with the feline herpesvirus when they’re kittens. It’s fairly common in multi-cat households or sometimes in environments where there are a lot of cats, such as shelters.

Bella: That’s why a lot of shelters will put their kittens into foster care until they’ve had all their shots. One of the vaccinations given to kittens protects against feline viral rhinotracheitis, as well as two other feline viral infections — feline calicivirus and panleukopenia (also known as “distemper,” although it’s not the same distemper that dogs get).

Thomas: So, Erin, it’s really important to take little Thibodeaux to the vet to find out why his eye is all weepy and why he has a strange little spot on his cornea.

Bella: We imagine little Thibodeaux’s eye is pretty sore, given the symptoms you describe. A lot of humans say that eye infections hurt or cause great sensitivity to light, so please do call and get him in for a checkup.

Tara: The good news is that even if for some reason he did end up losing an eye, “pirate kitties” really do just fine. They don’t know they’ve lost an eye; they just use the one they’ve got and still have lots of fun.

Thomas: Have you other readers had cats that developed eye infections or eye ulcers? Do you have any other tips for Erin?

Bella: Please share them in the comments. Purrs to all of you!