What’s Up With This “Crazy Cat Lady” BS, Anyway?

I am having a major existential crisis! Help! Why is it considered okay by “society” to have like 16 dogs sniffing your butt, but if you have two (or, God forbid, more!) cats, you’re “crazy” — or worse? Whatta friggin’ double standard! 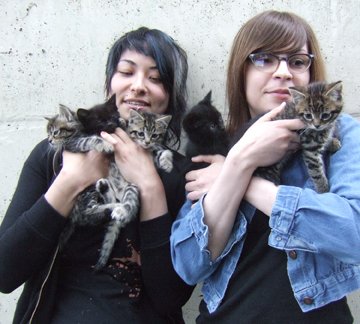 “Crazy” and proud of it,
~ Katrina and kitty-baby Julietta

Thomas: Mama’s had people ask her how many cats she “has,” and when she says “three,” she sometimes gets these weird looks and then people say, “Wow, that’s a lot!”

Bella: If Mama said she had three human children, people would be all like, “awww, how sweet!”

Siouxsie: If she had three dogs, they’d probably be complimenting her on her love for canine-kind.

Thomas: But when it comes to having three cats, it’s like they think she’s a “crazy cat lady” or something.

Bella: Mama doesn’t like the phrase “crazy cat lady,” either, even when it’s used in a “reclaiming” way like some LGBT people use the phrase “queer” and some African-Americans use the “N word.”

Siouxsie: Not that we’re equating being cat lovers with being a person who is oppressed because of something they’re born with like a skin color or a gender identity, mind you!

Thomas: Mama wrote this piece for Catster when World’s Best Cat Litter came out with its “I’m A Crazy Cat Lady” campaign, precisely because the stereotype is so tiring.

Bella: One of the comments on this post read, “I have a problem with the term ‘crazy cat lady’ too. I think it’s a pejorative term because it’s used to shame unmarried or unattached women (i.e., if you live alone with your cats, something must be wrong with you). And then we get to the use of the word ‘crazy’ and how it shouldn’t be okay to bash mental illness (real or perceived) and yeah, the term is not a winner.”

Siouxsie: And then there’s that whole “you’re just using your cats as a second-rate substitute for having children” thing.

Thomas: Men get hosed with the cat stereotype, too, as if “real men” can’t love and live with cats.

Bella: Besides, what’s a “real man,” anyway? If you know you’re a man, you’re a man, no matter whether you fit the stereotype of masculinity!

Siouxsie: It’s just a shame that in some parts of the world, people get such disrespect for being cat lovers. And I don’t get why more than two cats is somehow a sign that something’s wrong with you.

Bella: So I say, go ahead and love your cats, however many you have!

Thomas: As long as you’re able to take good care of your cats — feed them well, get them regular preventive vet care and treat their illnesses as needed, provide them the space and stimulation they need, and give them love with your full heart — who cares how many you have?

Siouxsie: The reason Mama stopped at three (beyond the fact that it’s hard enough to rent an apartment with three cats, let alone more) is that she knows that financially she wouldn’t be able to afford to take good care of more than three cats.

Thomas: So we say, go ahead and love your cats, and just scrape some used cat litter over the haters!

Bella: There are plenty of people in the world who will support you and who will know you’re not “crazy” for having multiple cats.

Siouxsie: What about the rest of you? What do you think of the term “crazy cat lady?” Have you been called a crazy cat lady? How have you responded to the weird looks and outright disrespect?

Thomas: Please share your thoughts and your stories so all you cat-loving humans can know you have a community of supporters bigger than the pool of uninformed haters!