What Should I Do About My Cat’s Recurring Cyst?

Cleo, the oldest cat I’ve ever met, was sleeping beside the air conditioner one night. She woke up meowing like she normally does (she was abondoned earlier in life and gets scared of she wakes up alone) so went to go and calm her down. I picked her up and scratched behind her ear like she likes and she stretched her head back, revealing a large pinkish-red fleshy bump on her chest, alittle under her chin. Cleo hasn’t really seemed to notice this much and it has been there for a few months now. I was wondering if maybe it is stress related, becuase it appeared around the time we moved Cleo from the screened-in porch into the house. But what really had me worrying over this lately is that it seems to have popped. It has healed in the past but continues to come back and then pop again, and that size of it looks as though it is pretty painful when it pops. My mother says that we shouldn’t take her to the vet since she is and older cat. But she acts like a juvinile cat that hasn’t fully settled into her routine yet. So I was just wondering if you could tell me what this is, so I could know if Cleo is in any pain. 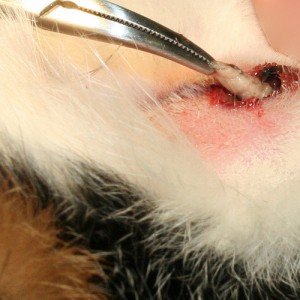 Siouxsie: Well, Mikayla, we definitely think you and your mother should take Cleo to the vet. This probably is an abscess or a cyst, and it keeps growing, popping, and shrinking back because the infection never really went away.

Thomas: Other possible causes for your cat’s sore include cuterebra larvae (sometimes known as warbles) and dental problems. If it is a warble, it must be removed by a vet to prevent serious problems.

Dahlia: This is how an abscess develops: A  cat gets a small puncture wound, such as a bite or getting stuck by something like barbed wire or a nail. The tiny wound scabs over and the skin heals, but the bacteria are trapped inside the wound.

Siouxsie: Then, as the bacteria multiply and the cat’s immune system responds by sending white blood cells to kill the bacteria, liquid — in the form of pus or serum — forms. This is what causes the swelling.

Thomas: Eventually the wound pops and the pus flows out. But if the wound isn’t properly cleaned, the cycle starts all over again: the wound scabs over and the bacteria start growing.

Dahlia: A cyst is similar, but instead of a penetrating wound, the cause is usually a blocked pore or hair follicle. Warbles can also cause swelling and immune system response like that of an abscess.

Siouxsie: Cleo needs to go to the vet so that they can drain and irrigate the wound in order to get as much of the infectious material out as possible. Your vet will probably prescribe antibiotics, too.

Thomas: You’ll be given instructions on home care of the wound, and if you follow the vet’s orders, Cleo should be fine within a week.

Dahlia: It’s really important that if you do get antibiotics for her, you give her all the pills, even if she’s feeling better. If you don’t, some bacteria could be left behind, and those bacteria can be resistant to the antibiotic — and that will make it much harder to treat her if she should have the same problem in the future. 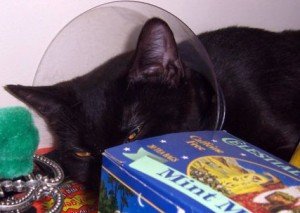 Your kitty might need to wear a cone collar, like poor Dahlia here, to keep her from worrying at her wound.

Siouxsie: If you don’t know how to give medication to cats, have your vet show you how before you leave the office.

Thomas: And if you need a refresher course, check out these videos on how to give liquid medication and how to give a pill.

Dahlia: Mikayla, please convince your mom that you should take Cleo to the vet and find out what’s going on. Even though she’s an old kitty, she still needs treatment. It does hurt, and it’s easy to fix. So, why not? She’ll thank you for it.