What Exactly Is ‘Shelter Lung’?

I have two cats, Marshmello and Butters, that I adopted from my local animal shelter. Butters was sick with shelter lung/kennel cough respiratory disease and a secondary infection when I got him. I immediately took him to the vet, who administered antibiotics (amoxicillin). I’ve had him for over a year now, and I just wanted to know what exactly is this disease? What special care does he need? And is there anything I can do for him besides giving him amoxicillin? 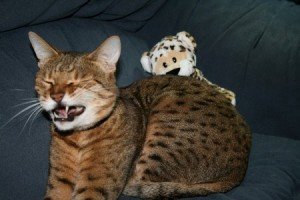 Sneezing is one of the symptoms of bordetella -- and many other feline respiratory diseases. Photo courtesy of whydoes.com

Siouxsie: The disease you’re referring to is also known as bordetella. It’s typically called kennel cough in dogs because it produces a harsh, honking cough. We’ve never heard it referred to as shelter lung before, so that’s a new one on us.

Thomas: Bordetella is caused by a bacteria called Bordetella bronchiseptica. This bacteria is present in normal, healthy cats, and it only seems to become a problem when a cat already has a viral upper respiratory infection. Then, bordetella flourishes as a secondary infection.

Dahlia: The disease is much more dangerous for kittens and is more severe in shelters or situations with crowding, stress, and inadequate ventilation.

Siouxsie: Bordetella is found in cats, dogs, small animals such as rabbits, and sometimes even in pigs. It is a highly contagious illness spread by sneezing and coughing. Dogs and cats can infect one another.

Thomas: Cats with compromised immune systems, such as those with FIV or feline leukemia, or those undergoing chemotherapy, are also at high risk of catching the disease.

Dahlia: Bordetella is contagious to humans with weakened immune systems, so people with HIV, who have had organ transplants, or who are undergoing chemotherapy or radiation therapy should avoid contact with infected animals.

Siouxsie: It can be hard to tell a bordetella infection apart from  viral respiratory infections because they tend to have very common symptom profiles: lethargy, fever, not eating, coughing, sneezing, and discharge from the eyes and nose. Cats with bordetella often have swollen lymph nodes under the chin.

Thomas: Bordetella infections can be very dangerous because they progress so quickly from a cough and runny nose to being at death’s door with pneumonia.

Dahlia: This becomes a particularly serious problem when a cat is treated for one type of respiratory infection and seems to be making a good recovery — until the bordetella infection that’s been brewing beneath that other illness manifests in full strength.

Siouxsie: So, how are bordetella infections treated? Generally vets prescribe a course of antibiotics, just like yours did, in order to knock down the bacteria before it causes major damage.

Thomas: Because the disease causes cats to lose their appetites, partially because of fever and partially because their noses are blocked up and they can’t smell their food, it’s crucial to keep these cats eating, force-feeding them if necessasry. Cats that don’t eat for several days can develop a potentially fatal condition called hepatic lipidosis, or fatty liver disease.

Dahlia: Vets generally prefer to treat bordetella patients at home because the disease is so highly contagious.

Siouxsie: But if the illness is very severe — for example, if pneumonia has developed — the afflicted cat would receive inpatient treatment including IV fluids and strong antibiotics.

Thomas: If you have an animal with bordetella, it’s crucial to separate him or her from any other animals in your home. Sterilize all food and water dishes and litterboxes, and wash all bedding. Some vets even recommend treating other pets in the household with antibiotics in order to prevent infection.

Dahlia: The good news is that cats who get proper treatment generally have no further complications for the rest of their lives.

Siouxsie: There is a vaccine for bordetella, but because the disease can be effectively treated with antibiotics, veterinarians don’t recommend the vaccine unless the cat’s lifestyle warrants it.

Thomas: The best thing you can do to keep Butters and Marshmello healthy is to feed them the highest-quality food you can afford, give them filtered drinking water (this is especially true if you get your tap water from a municipal supply, and it’s easily done by buying a filter pitcher for $25 or so), and be sure to get them to the vet for annual checkups.

Dahlia: If Butters is still having respiratory symptoms after a year, we’d recommend that you talk to your vet and see if he or she has any suggestions about what might be going on, because bordetella should go away in a few weeks if it’s properly treated.

Siouxsie: We hope this has answered your questions, Holly. If you’re interested, you can find more detailed information about bordetella here.