What Causes Cats to Have Seizures?

Last night, my cat was fine, but this morning I found her lying on her back with her paws stretched out. She was alive, but she had vomited and was very zoned out. I picked her up and she started arching her back, but she was still acting extremely lethargic and seemed unaware of what was going on around her. I put some water around her lips and she licked it. Then she began to open her eyes but they wouldn’t open all the way, as part of her eylid was still closed. She also made static and uncontrollable movements (such as crossing her paws and jerking her head), which led me to think that she was having a seizure. I took her to the vet, of course, but I was just wondering what could have caused this and what possible treatment options are. 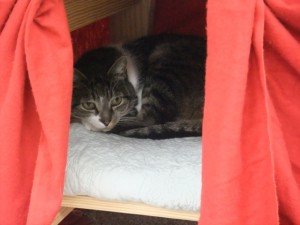 Cats that are about to have a seizure may hide.

Siouxsie: First of all, Jessica, we’re very glad you took your cat to the vet. Seizures are an emergency and any cat having a seizure needs immediate veterinary attention. This can sometimes make the difference between life and death!

Thomas: It’s horrifying and gut-wrenching to watch a cat have a seizure. Mama’s seen this before (fortunately, not with any of us), and she hopes she never has to witness it again!

Dahlia: Although seizures are relatively rare in cats, there are a number of things that can cause them.

Siouxsie: According to the Cat Owner’s Home Veterinary Handbook, most seizures in cats are caused by poisoning. Strychnine (sometimes used in “varmint baits”), antifreeze, lead, insecticides like organophosphates and chlorinated hydrocarbons, and certain rat poisons are known to induce seizures.

Thomas: A cat that suffered a head injury may have seizures several weeks after the accident because the scar tissue that builds up in the brain can affect neurological function.

Dahlia: Kidney and liver failure can cause seizures because of the buildup of toxins in the body.

Siouxsie: Cats can also have strokes. Because strokes cause brain damage, they can induce seizures.

Thomas: Cats do get epilepsy, too, but it’s quite a bit rarer in cats than it is in dogs.

Dahlia: What it comes down to is, the only way you’re going to know what’s causing your cat’s seizures is by taking him or her to the vet.

Siouxsie: If your cat is having a seizure, make sure she’s not near anything that could cause her to hurt herself. Move furniture out of the way, and so on.

Thomas: Cover her with a blanket and stand aside until the seizure abates. We’d recommend a light and breathable blanket made of something like Polar-fleece.

Dahlia: Do not try to put your fingers in her mouth or wedge something between her teeth. Cats can’t swallow their tongues or bite them off.

Siouxsie: Take note of what your cat is doing while having her seizure — arching her back, paddling her paws, drooling, twitching, crying out, and so on. Your vet will need this information to help with her treatment.

Thomas: If possible, record video of the seizure while it’s happening. In the age of smart phones and tiny digital video cameras, it’s easy to do and it can give your vet some vital information. That’s what this guy did. (Warning: you might find this video disturbing.)

(If you can’t see this video, you can watch it here.)

Dahlia: Of course, we hope that while you’re taking the video, someone else in your home is getting the cat carrier ready and calling the vet!

Siouxsie: The cause of the seizures will determine the treatment. If your cat has been poisoned, the vet will undertake aggressive treatment to get the toxins out of your cat’s system as quickly as possible. Intravenous fluids, medication, making the cat vomit, and oxygen therapy are among the things vets may do to save a poisoned cat’s life.

Thomas: If your cat is having seizures due to epilepsy, the treatment will involve the same kind of drugs given to humans who suffer from the disease. Phenobarbitol, diazepam (Valium), and potassium bromide are common drug therapies for epileptic cats.

Dahlia: The thing is, these drugs can be very toxic, so if your cat is on any of these medications your vet should do periodic blood work to ensure that your cat’s organ function is adequate.

Siouxsie: It’s a good idea to keep track of your cat’s seizure activity on a calendar. It might help you and your vet to see if there’s a pattern to the seizures.

Thomas: One more thing — there’s another disease that produces symptoms that look a lot like seizures, but they’re really not. And that illness is vestibular disease.

Dahlia: Vestibular syndrome is caused by a problem with the balance center in the cat’s inner ear. A cat with vestibular syndrome may stagger, roll around on the floor, and twitch his head. This is because he’s always dizzy and disoriented.

Siouxsie: This woman took a video of her cat to show the vet. It turned out she had vestibular syndrome — but you can see how that condition can easily be mistaken for seizures!

(If you can’t see this video, you can watch it here.)

Thomas: The good news about vestibular disease is that it’s fairly easy to treat and a cat with the condition shows a lot of improvement after a few days of good vet care and home care.

Dahlia: So, Jessica, although your vet is going to be able to give you a lot more information about your cat and her issue, we hope we’ve been able to help you — and the rest of our readers — understand a little bit more about seizures in cats.