We Want Your Adoption Stories!

Paws and Effect is teaming up with Petfinder and a bunch of other awesome cat blogs for Adopt The Internet Day on March 15. In celebration of Petfinder’s 15th anniversary, we cat bloggers are going to take over the internets with our stories about adoption and happy endings. 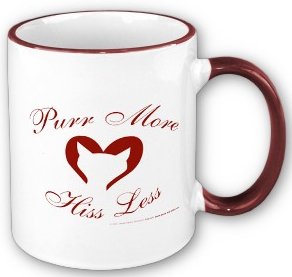 We want to share lots of happy ending stories, so we’re asking you to participate! Please write a comment to this post and tell us your adoption story. Three commenters will be picked at random to win a Purr More, Hiss Less coffee mug from the Paws and Effect Boutique at Zazzle.com! And on March 15, we’ll write a post featuring some of your stories.

To kick off the celebration, we’ve got a special treat for you! We found Mama’s diary and we’re going to share some of her entries about Thomas and his adoption. His adoption anniversary is March 12, so the timing is just purrfect!

Feb. 4, 2004: I’m going to be temporarily boarding a sweet boy cat named Tom for one of the local animal shelters. It’ll be a couple of weeks before I get to take him, though, because he’s sick with an upper respiratory infection right now. I hope I’ll be able to go over and visit him on Friday, but I called the shelter today and they said Tom is still in isolation and I probably wouldn’t be able to see him because of that. I’ll still go over there and fill out the fostering paperwork and stuff, and maybe I’ll at least catch a glimpse of him so I have an image to share with Sinéad and Siouxsie. Meanwhile, I’ll send him some Reiki in hopes of helping him heal.

Feb. 6, 2004: The high point of my day was a trip to the animal shelter to visit with Tom. He’s a really sweet boy, but he’s still pretty sick. He’s got a serious upper respiratory infection, and he snots all over the place, but he still knows how to cry and purr and be a loving kitty. I think he may have an abscess somewhere, too, because I smelled pus when I was in his enclosure. Well … he’s on antibiotics, and they’ll help with any abscess, too. He’s a tabby-and-white kitty, with a cute little tan spot on his chin. I borrowed a digital camera from work and took a few pictures of him while I was there.

Feb. 7, 2004: I went to visit Tom at the animal shelter after work today, and I found out that they took him to the vet this morning because he’d gotten a lot sicker and wouldn’t eat. So he’s on IVs and major antibiotics in hopes of getting him better.

But Tom’s core problem, in my opinion, is that he has a broken heart. And his broken heart is keeping him from healing. Tom’s original human had to go to a nursing home, so he and his two sisters were given up to the animal shelter. All three of them got sick, but the sisters recovered more quickly, so they were moved back into “regular” cat quarters, while Tom remained in isolation. So not only was he “abandoned” by his first human, but now he’s all alone without his two littermates, who he’s been with since the day he was born. Even the people at the shelter believe there’s a connection between these traumas and Tom’s failure to recover.

Of course, I fell in love with the little guy the moment I saw him, and I’m so sad to hear that he’s gotten sicker. I communicated with him and asked him to hang in there. I did say that if he really felt he needed to die at this time, I’d let him go, but if even a little part of him wants to hang on, I’d be there for him.

Feb. 9, 2004: I called the animal shelter today to see how Tom is doing. They told me he’s still at the vet and they still have him on IVs. The lady I talked to agrees that Tom’s depression is making it hard for him to get over this infection. 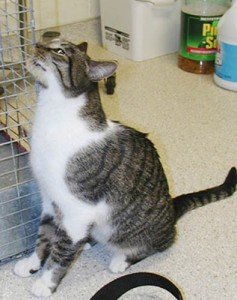 Thomas at the shelter, rubbing on a cage and purring with joy. You can't see it here, but his nose is covered with snot and crusties.

Feb. 13, 2004: I went to the shelter to see if Tom had come back from the vet. He had just returned that morning, and he’s looking fine and happy and energetic. I let him out of his cage and he ran around all over the place, rubbing and bumping and sniffing everything, including me. He purred and purred and let me pet him — the joy in his eyes when he saw me was just wonderful. I’m so glad he’s better, and I’m really grateful for all the purrs and prayers and healing energy from people and cats all over the world. I’m also grateful that I was able to send him Reiki several times. Last night I got the distinct feeling that Tom was doing better, but I was afraid to believe it — animals can be relieved of the pain of illness by death as well as by recovery. So I was extra-happy to know my sense that Tom is better was accurate.

Feb. 19, 2004: I stopped at the shelter to pay a visit to Thomas the Cat. I’m glad I did, because I found out he’s been adopted! A really wonderful family adopted him and his two sisters, which is the best possible outcome for this kitty. I got to visit with him a little bit and say goodbye and congratulations. He’s completely recovered from his respiratory infection, and he’s raring to go live with his new family. Although the Ladies and I won’t get to foster him, we’re so glad we had the chance to get to know him and send him love and healing energy and prayers and Reiki so that he could heal not only his respiratory infection but his broken heart as well. Now he and his sisters are on their way to a new chapter in life, full of love and joy. Good for them!

Feb. 27, 2004: The shelter called and asked me if I was still interested in Thomas. “Of course!” I said. “What happened?” Apparently the little guy was fighting with his sisters and the owners couldn’t deal with the constant hostilities. I think they had just been separated for so long that they’d forgotten they used to be siblings.

March 4, 2004: I brought Thomas home today. He’s hiding in his “safe room,” a.k.a. my office. I’ve only seen him twice all day — and that was just his tail as he went flying behind the bookcase. I sure hope the poor little guy comes around soon!

March 6, 2004: Thomas is slowly coming out of his shell. I dosed all the cats with Rescue Remedy again last night, and then I got to thinking about homeopathic remedies. I’ve learned a lot about homeopathy from a good friend who’s a veterinary homeopath, and I started recalling our discussions and listening for a whisper from my intuition. As I started going through the homeopathic apothecary I have here in my cabinet, I came across a packet of remedies I got from my vet homeopath friend the last time I visited her in England. One of these was Ignatia 200C–as soon as I picked it up, my intuition went dingdingdingding, so I took one pillule out of the packet and gave it to Thomas, who was very good about taking his medicine.

Once I’d dosed him, I went to look up Ignatia in a basic homeopathy book to see what the Ignatia constitutional type is and what it’s used to treat. And there it was in black and white — Ignatia is used to treat grief and depression resulting from a major emotional shock.

An hour later I was in the kitchen refilling my water glass, and there was Thomas, sitting right by the French door that leads from the office to the kitchen, looking out curiously at me and the Ladies. Two hours later I went to bed, and as I was falling asleep, I heard Thomas scratching in his litterbox. When I went to give him breakfast this morning, I saw that he’d eaten every kibble in his dish. 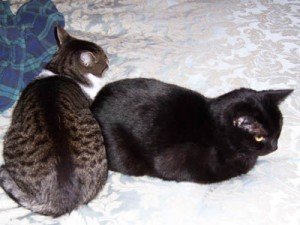 It wasn't too long before Thomas and Sinéad started snuggling together.

March 10, 2004: I called the animal rescue league today and told them that all of us (that would be Sinéad and Siouxsie and me) are in agreement that Thomas would be a wonderful addition to our family. He’s had run of the house for the last couple of days — because he didn’t want to stay in his room anymore and made that very clear by scratching on the closed door at every opportunity — and Sinéad and Siouxsie are handling the whole thing very well.

March 13, 2004: The sweet little stripey-guy, Thomas, is officially a member of the family. I signed his adoption papers yesterday. He seems to know it, too; now he’s venturing into the living room and even sitting on Sinéad and Siouxsie’s kitty condo (with their permission, of course).