The New Dog Chases Me. Help!

I’m a Birman kitty who was rescued from going to the shelter by my Mom and Dad about 3 years ago. I got moved around a lot before Mom and Dad gave me a permanent home, so I’m naturally a little nervous and shy.

Last year, Dad said we needed a dog. She’s really big, and whenever she sees me, she chases me. I hide under the bed a lot. My parents put up a gate so the dog can’t get to me, and I come out at night because the dog sleeps in a kennel, so I’m safe. How do I keep the dog from cornering me all the time?

I have two kitty sisters that the dog doesn’t chase like she does me. They have claws and hit her, but one of my old owners had me declawed. I’ve gotten a really bad skin allergy that Mom thinks is because I’m nervous all the time. I’m very sweet and a good kitty, but I can’t deal with the dog. Is there a way I can make her behave so I can sit in Mom’s lap and play during the day?

The dog has big feet and bonks me on the head and barks at me. Why does she bark and try to jump on me all the time? I just want to lay by the fire and get cuddles. 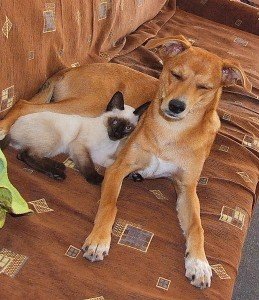 Cats and dogs can and do get along well together. It’s most likely to happen if each species was socialized with the other so they learn one another’s body language at a young age. Photo (CC-BY-SA) by Arantz

Siouxsie: Well, Snowbird, as you’ve probably guessed by now, dogs and cats speak very different languages. Your dog is trying to tell you she wants to play, but being a cat, you’re interpreting it as aggression.

Thomas: And we can certainly see why you’d be scared, considering that you don’t have any claws (hisses to the person who had you declawed!) and that the dog is so big!

Siouxsie: Now, Snowbird, this is a situation where your people have to step in and help you. It’s not fair for you to have to deal with teaching the dog a lesson all by yourself. But don’t worry — we’ll give your people some tips to help you out.

Siouxsie: Because you’re a nervous kitty and you don’t have any claws to defend yourself, the introduction has to start with you and the dog occupying separate spaces for a while, followed by allowing the two of you in the same room with the dog on a leash.

Thomas: The dog should be positively reinforced (with treats and love, or whatever reward motivates him) when he sits and stays while you’re in the room.

Siouxsie: If the dog stares at you, that’s a bad sign, and your people should try to distract him with a toy.They also shouldn’t leave him alone with you until he learns to stop chasing you. The whole idea here is that the dog should learn to ignore you and not make his “friendly” overtures. You’re the one who should make the first move when it comes to getting to know each other.

Thomas: The American Humane Association offers great step-by-step instructions for introducing a dog to a cat.

Siouxsie: Now, we assume your person has taken you to the vet to make sure you’re physically healthy and that your skin rash isn’t a sign of a disease. If she hasn’t done that, she should.

Thomas: If you’ve gotten a clean bill of health, we have an idea that might help you feel better and help the dog behave better. Mama says it’ll probably sound “woo-woo,” whatever that means — but we hope you’ll be open to the idea.

Siouxsie: There’s a company called Spirit Essences, which makes all kinds of lovely remedies that help cats and dogs (and horses, too) that have behavior issues. It’s run by Jackson Galaxy — you know, the guy who stars in Animal Planet’s My Cat From Hell …

Thomas: Jackson is my hero!

Siouxsie: Oh, stop your fawning. Anyway, we’ve used Spirit Essences in our home, and we can attest to the fact that they really work! Mama got some Safe Space for Cats remedy for Kissy *sniffle, weep* … dammit, I can’t believe I actually liked that cat after all …

Siouxsie: Anyway *lip tremble*, she used the essences and it was only a couple of days until the dynamic in our house really started to change. Kissy felt more confident, and Thomas felt more chill, and that was the beginning of Kissy’s emotional healing.

Thomas: *sniffle* We’d recommend that your people try some of these essences to help heal the relationship between you and your dog. There’s a remedy kit called Ultimate Peacemaker, which is really good. It contains three remedies — Peacemaker, Bully Remedy, and Self-Esteem Remedy.

Siouxsie: Anyway, your people can put a few drops of the appropriate essence in each critter’s food. A few drops of Peacemaker can be administered in everybody’s water, and if they get the spray top, they can also spritz the stuff into the air.

Thomas: We’re sure your people — and you — will see a big difference if they reintroduce the dog properly and use the essences to help all of you on a more subtle level.

Just a quick note about why Kissy wasn’t part of the conversation today: If you haven’t been following us on Facebook or getting our RSS feed, you probably don’t know about the tragedy that befell Paws and Effect HQ earlier this week. Kissy had surgery to amputate her deformed and chronically painful leg on Monday, and unfortunately, she was that one in a million kitties for whom everything went wrong. The surgery itself went great, but a few hours later, a cascading series of crises began and ultimately led to her death. If you want the details, you can read this column — be warned: major tissue alert!