Is It Time for Me To Release My Cat From Suffering?

Last year, my cat Kravitz underwent treatment for hyperthyroidism and a bladder infection. He was cured of the hyperthyroidism, but was diagnosed with mild kidney failure. He was switched to a renal support food, and he was fine for a while.

Last week, he stopped eating a lot and was constipated. A trip to the vet with some mild medication, sub-skin fluids, and an appetite stimulant, and Kravitz was back to his old self. At some point this week, he urinated a great deal on my bed, soaking through all my blankets. Since Kravitz recently had a urine test, my mother thinks it introduced another infection. However, Mom also thinks that the renal failure is advancing, and at 13 years old, she believes he’s on his way out.

I don’t want to believe Kravitz needs to be put down. I need him too badly. I’m going to try to consult a pet psychic next Thursday, and ask Kravitz what he wants to do. But what do I do if he says he needs to go, and how can I deal with this latest infection, besides completely stripping my bed every morning? 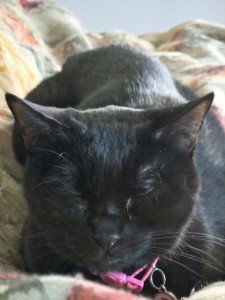 Siouxsie: There are times when it’s easy to know it’s time to release a cat from suffering. When Mama had to let Dahlia go last year, there was no question that she was in pain and it was clear what the right decision was.

Thomas: In the case of illnesses like chronic renal failure (CRF), it can be harder. Cats with that disease have ups and downs, and often veterinary treatment can get a cat feeling better — at least for a little while.

Bella: But eventually the bad times outweigh the good.

Siouxsie: Leigh, the only way you’re going to know for sure what’s going on with Kravitz is to get that information from your vet.

Thomas: If your vet does a blood test on Kravitz, you’ll have more tools to make a decision about what’s best for your kitty.

Bella: If his problem is just a urinary tract infection, antibiotics can clear that up and he’ll be back to himself again.

Siouxsie: On the other hand, if Kravitz is in late-stage kidney disease, it may be the kindest thing to release him.

Bella: On the other hand, cats with CRF can live good lives with some home support, including subcutaneous fluids and special diets.

Siouxsie: If you want to find out more about kidney disease in cats, FelineCRF.org is by far the best resource and support for people with cats in kidney failure.

Thomas: FelineCRF.org also has a page that describes end-stage kidney disease and the signs to look for as the end approaches.

Bella: Incontinence and loss of appetite are among those signs, unfortunately.

Siouxsie: We’d recommend that if Kravitz wants to sit on your bed (and clearly he does) and you don’t want him hosing down your sheets every night, you put some waterproof stuff on your bed — perhaps wee-wee pads with towels over them, or maybe plastic garbage bags with bedding materials on top, because no cat wants to sleep on garbage bags!

Thomas: Ultimately, Leigh, we’d recommend that you do whatever you need to do to logically understand what’s in Kravitz’s best interest. Lab tests and advice from your vet will be a big part of that. The animal communicator might be helpful in giving you emotional confirmation of what science tells you.

Bella: We understand that it’s hard to let go of a beloved friend. Mama’s been through this several times herself, and she has lots of compassion for you.

Siouxsie: But ultimately you need to do what’s right for Kravitz. If the right thing to do is to put him to sleep, it’s up to you to make that choice — and, as all cat lovers know, it’s the bravest, most loving and most heartbreaking choice you’ll ever have to make.

Thomas: We send lots of purrs your way. Please let us know how things turn out.

Bella: *sends loving head-bonks and purr therapy for you*