My Cat Was Fine, Then A Week Later He Was Dead. Why?

Last week I was watching my parents’ house while they were out of town, and I noticed my cat, Charlie, was having trouble breathing. It was almost like he was gasping for air. The next day I realized he hadn’t been eating either so I took him straight to the vet. They informed me that he had fluid between his lungs and chest cavity called pleural effusion, and that he had an enlarged heart. After two days, they sent me home with heart medication and diuretics to get the fluid out of his body. It seemed like everything was back to normal: he was eating again, his breathing was good, and he was sleeping with me every night. But a couple of days after that, I woke up and found him under the table, breathing rapidly and unable to use one of his back legs. I rushed him to an emergency vet, where they put him in an oxygen tank and wanted to keep him overnight till I could bring him to my regular vet. But they seemed to care more about money more than about helping Charlie, so I took him home. The next day I took him to my vet, where they told me he had a blood clot in his leg and there was nothing they could do. My dad came back that day and he made the decision to put Charlie down. 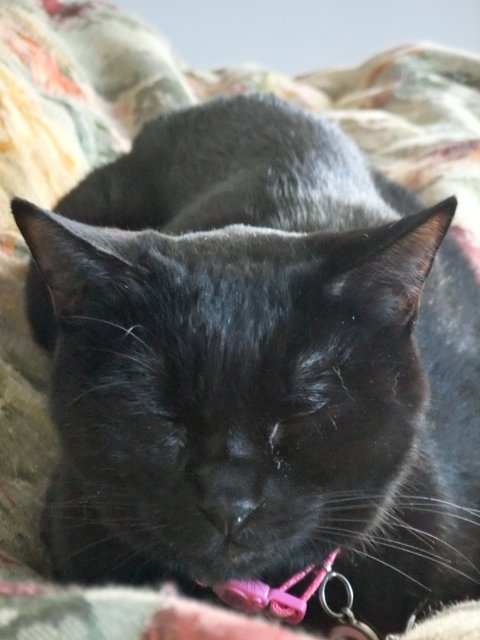 Our sweet Dahlia got really sick and survived about a week and a half after her first trip to the emergency vet. She was only 6 years old, too. Photo Copyright © JaneA Kelley

I was devastated and I don’t understand where things went wrong. How could a healthy 6-year-old cat deteriorate that fast over the course of a week? And why did three completely unrelated things happen almost simultaneously? I feel like I did everything I could, but it seemed like everything was working against him.

Siouxsie: Oh, Jessica, we’re so sorry for your loss. We know how hard it is to lose a cat friend that young.

Thomas: My sweet Dahlia got really sick and died within about a week and a half … *sniffle* … and she didn’t even want to snuggle with me toward the end … *sniffle*

Bella: There, there, Thomas. Come here and let me snuggle you and lick your tears away.

Siouxsie: Even I kind of liked the little monkey. At least she was nice to me and didn’t chase me around the house, unlike some kitties I could mention!

Siouxsie: Anyhow, Jessica, we think that the episodes that led to Charlie’s death are not as unrelated as they may seem.

Thomas: The three issues you mention are commonly related to a heart condition called hypertrophic cardiomyopathy, or HCM.

Bella: In this disease, the walls of the heart muscle are abnormally thickened, and that reduces the efficiency of blood pumping.

Siouxsie: Because of the thick heart wall and defects in the valves that move blood between the chambers of the heart, usually a cat with HCM will have a heart murmur.

Bella: Another thing that can happen in cats with HCM is that because the heart isn’t working properly, blood clots may form. When those clots break loose from the heart, they travel through the aorta (the main artery that delivers blood from the heart to the rest of the body) and get stuck when the arteries start getting smaller.

Siouxsie: Usually this happens where the aorta splits into two smaller arteries to deliver blood to the legs. In this case, it sounds like the blood clot got stuck in one of those leg arteries, which resulted in Charlie’s inability to use that rear leg.

Thomas: Why do some cats get cardiomyopathy and some don’t? Well, some of it has to do with genetics: Maine Coon and Ragdoll cats seem to be more prone to HCM. But any cat can get it and it’s most commonly diagnosed in male cats between ages 5 and 7.

Bella: The bottom line, Jessica, is that you did everything right. You took Charlie to the vet and got him treated, and you did your best to keep him healthy and comfortable. But sometimes there’s just nothing anybody can do in that situation other than giving him a humane release from his suffering.

Siouxsie: It’s so ridiculously unfair when a cat gets so sick at such a young age! We all felt the same way when Dahlia got sick and Mama had to ask the vet to release her from her suffering.

Thomas: Charlie knew you loved him and cared about him, and that’s really what mattered to him.

Bella: Please accept our deepest purrs of compassion and condolences, Jessica. We hope that maybe we’ve been able to alleviate your pain by explaining what might have happened.

Siouxsie: Have any of you other readers had a cat with heart disease? What tips do you have to offer to readers who may be dealing with this? Please share them in the comments.