How to Deal With Inappropriate Urination 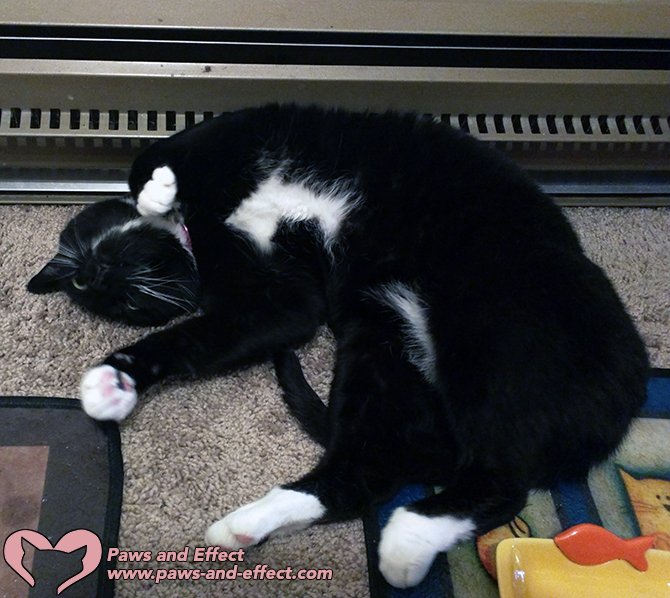 You wouldn’t believe this is the same cat who frustrated me with her inappropriate urination behavior when she first arrived.

Inappropriate urination is one of the most frustrating things cat guardians have to deal with. We get all kinds of emails here at Paws and Effect HQ from people whose cats are peeing and pooping where they shouldn’t. We give the best advice we can, but did you know I’ve had to deal with this annoying and heartbreaking problem, too?

It’s true. When Tara came to Paws and Effect HQ two years ago, she was one very stressed-out kitty. She spent most of her time hiding, coming out only to eat and for the occasional petting.

This was Tara’s first “home” when she came to Paws and Effect HQ.

Naturally, when a cat feels compelled to hide, that means they’re pretty stressed. Stress is pretty much the primary cause of inappropriate urination. When a cat is stressed, they feel the need to surround themselves with their own smell, and urine is one way cats their territory.

Some people think cats pee where they shouldn’t because they’re “pissed off,” so to speak. But cats aren’t vengeful–their minds just don’t work like that. Instinct drives them to mark their territory as a response to stress, not resentment because you came home late one night or got a new boyfriend or girlfriend.

I knew all that, and I also knew that the first thing I needed to do when faced with Tara’s inappropriate urination problem is to get her checked out by a vet. At her checkup, it didn’t seem that she had any medical problems that would cause her to pee where she shouldn’t, so the vet put her on alprazolam, a tranquilizer, to reduce her anxiety.

At first it seemed to be working, but Tara was still hiding. This time she was hiding under the sofa, and she’d still only come out to eat. I saw her using the litter box once or twice, so I figured everything was good.

Until I moved the sofa. 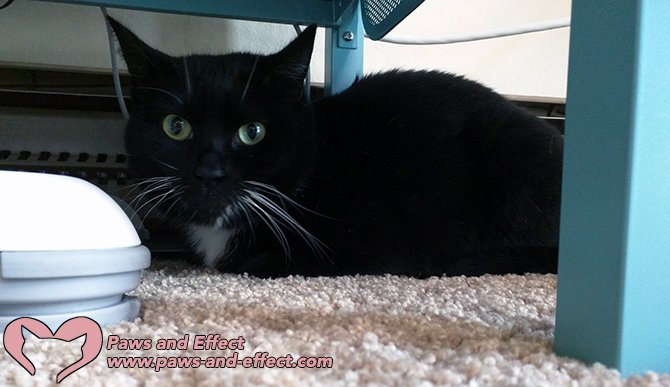 When I moved the couch, Tara rapidly scurried under the TV console.

When I did, I was greeted with a waft of urine stench like you wouldn’t believe. I immediately took out my black light and found no fewer than a dozen pee spots in the carpet. I was grossed out, but I wasn’t mad at Tara. I knew she was still stressed, and that’s why she was still engaging in inappropriate urination.

Now, at this point I was still thinking that we were dealing with a behavioral problem, because her vet check had come back clean. I invested in some calming collars, which seemed to have a bit of an effect as far as getting her out from under the furniture.

I also knew that if I was going to keep my apartment from smelling like Cat Hoarder HQ (and if I wanted to get my security deposit back when I move out), I had to clean the urine.

I tried several enzyme and carbon dioxide-based cleaners, but none of them seemed to cut the odor. Even I was grossed out when I came into my house. Then a friend recommended a product called 123 Odor Free. I bought their kit, which cost about $40 plus shipping. 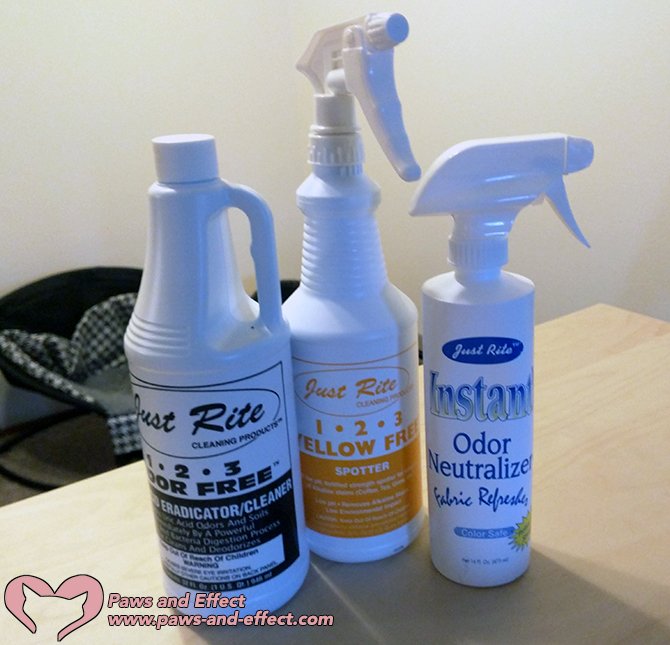 This stuff is great! Highly recommended!

I followed the instructions to the letter, and finally, the urine odor was gone.

But alas, the peeing started again. I didn’t know what had provoked it, because it seemed like things were getting better between the cats. I was also starting to wonder if this was the right home for Tara and whether she’d be happier as an only cat. But my best friend, a fellow cat lover, convinced me to keep trying. “Maybe I should take her to the vet again,” I said. She agreed that would be a good idea, so the next day I made the appointment.

“Please, do all of the things. I don’t know why the inappropriate urination started again, but I want to really do everything possible to rule out a medical problem.”

So we did x-rays to check for bladder stones or bone trauma. Nothing.

But the cystocentesis came back with blood in her urine, and some bacteria. It turned out that against the odds, she did in fact have a urinary tract infection.

Once her medical problems were resolved, the inappropriate urination stopped again. I was glad I’d gone to the vet and insisted on getting some kind of answers. I was also glad I’d stuck it out and kept trying with Tara. Now she’s a different cat. 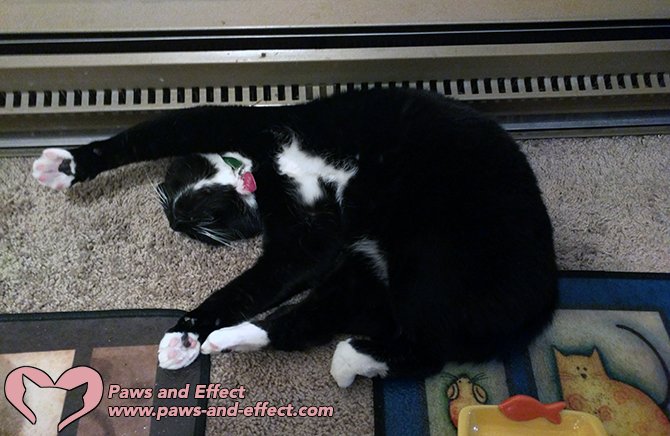 I took this photo of Tara on December 1. She fell asleep like this. Not stressed out at all these days!

So, what should you do if your cat is peeing where she shouldn’t? Here are my tips.

Before you assume your cat’s inappropriate urination problem is behavioral, you need to rule out medical problems. Although it’s unlikely that a young cat will have a urinary tract infection, it does happen–as it did with Tara. Other medical causes of inappropriate urination include bladder stones and possibly physical trauma that results in difficulty peeing in the right places.

2. Clean the bejezus out of your place

You’ll have to find all the spots where your cat has peed and clean them. Do this with a black light in a dark room. Look for spots in the carpets and on the furniture, and also look on the walls to a height of about 2 feet to check for urine spray marks. Urine stains glow under black light. Start with an enzymatic cleaner or a CO2-based cleaner. If that doesn’t work, or if the pee has gone deep into your carpets or furniture, I recommend the 123 Odor Free product I mentioned above. Whichever product you use, you need to follow the instructions to the letter for best results.

Use plug-in diffusers in the rooms where your cat hangs out. These produce a synthetic “happy cat” pheromone that will hopefully make your cat feel calmer. Also, check outside your home to see if other cats are coming into your yard and stressing your cat. There are plenty of humane ways to deter cats or wildlife from coming into your yard, including motion-activated sprayers and motion-activated ultrasound emitters.

Build your cat’s confidence by playing with her. As your cat becomes more confident, it’s much more likely that she won’t engage in inappropriate urination.

Some cats really need a course of stress-reducing medications. My vet recommended alprazolam, which has worked great for Tara. Other vets might recommend Prozac or other SSRI antidepressants. Your cat may only need a short course of the meds to break the stress cycle, or it could turn out that they need to be on it for life. That’s the case with Tara. I’ve tried to wean her off the alprazolam once, and the inappropriate urination returned. I also tried to replace it with other supplements, but that didn’t work, either. I’ve accepted the fact that like some humans, she just needs to be on head meds for the rest of her life.

Whatever you do, never hit your cat or rub her nose in her urine. She’s not going to understand why you’re doing it, and it’ll break your bond. Once she loses trust in you, she’ll be even more stressed out, and she’ll just take her inappropriate urination where you can’t see it. Instead, just love her and be compassionate. I know from experience that this is tough as heck, but it’s well worth it in the long run. 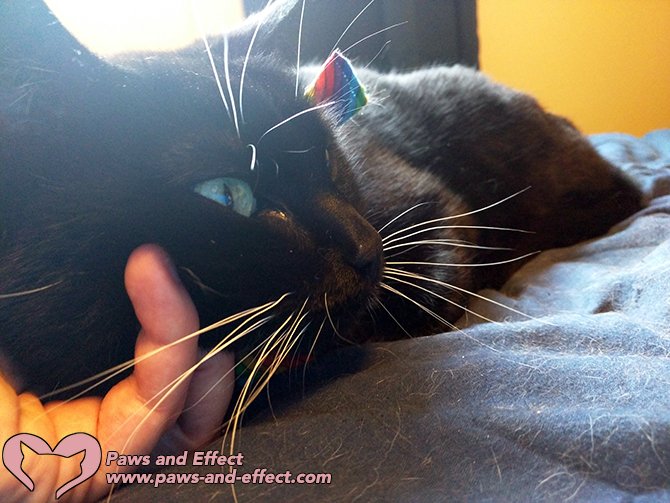 Be patient and compassionate with your cat as you work to solve her peeing problems.

I hope that by sharing Tara’s story, I’ve given you some hope that inappropriate urination is a problem that can be solved. It’s well worth the effort when you end up with a happy cat who uses the litter box like a champ.

Have you had to deal with a cat who pees where they shouldn’t? What did you do to help your cat stop the behavior? Please share your ideas and thoughts in the comments.