Should I Spay My Feral Cat?

I’m a vet currently living in Guatemala City and working for the Pan-American Health Organization (PAHO). For the last two months, I’ve been feeding a stray cat who comes to my garden every day. I’ve vaccinated and de-wormed this cat, which I’ve named Colors, and given her anti-flea treatments. But now I’m wondering if I should neuter her, too.

I’ve been trying to tame her so that she can find a good home, but it’s clear from her behavior that she is feral. Because of this, and because she and my current cat despise each other, I can’t take her with me when I return to Canada next year.

The reason I’m questioning whether or not to neuter her is because she’s survived quite well so far, and I’m afraid that if I spay her I might take away her tools to survive — when she’s in heat, the other cats allow her into their territories, and maybe when she’s pregnant or with a litter, she might be more strong and competent in her ability to fight and get food. On the other hand, if I don’t neuter her, I know that soon she’ll show up pregnant. Please, I need some advice on what to do in this situation. 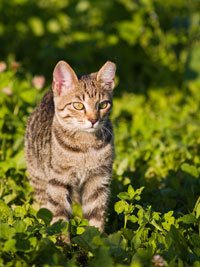 This feral cat has been "ear-tipped" to show that she has been neutered. Photo courtesy of Alley Cat Allies

Siouxsie: Ana, we definitely think you should spay this cat.

Thomas: Many scientific studies show that neutering feral cats actually leads to a longer and healthier life. When you remove the stresses of mating and the physical demands placed on a wild, unspayed cat by litter after litter of kittens, you’re doing her a big favor.

Dahlia: In fact, there are organizations all over the United States, Canada, and many other countries to spay and neuter feral cats and return them to their colonies. This program, called Trap-Neuter-Return (TNR), helps to stabilize cat colonies and gradually reduce their size.

Siouxsie: Alley Cat Allies is a nonprofit devoted to advocating for humane care for feral cats and helping people to manage the feral cat colonies in their communities.

Thomas: They have lots of information on how to build TNR capacity, how to advocate for feral cats, and even how to set up a TNR program in your own community.

Dahlia: We think starting a TNR program would be a great way to contribute to public health! Especially if you also vaccinate the cats against rabies while you have them in your care.

Siouxsie: If you have the time and energy, we hope you might consider not just spaying this one cat but working with other people in your community — both foreign families living there and local veterinarians and other interested Guatemalans — to do this wonderful service for the feral felines of Guatemala City.

Thomas: From letters we’ve previously received from people living in Central and South America, we do know that some of the work you’d need to do involves changing people’s attitudes about cats, and animals in general. We also know that there are a lot of very serious public health issues that need attention, and these might make great demands on your time already. But even if you have to work alone and you can only spay or neuter a few cats, you’ll make a difference.

Dahlia: We’ve seen small actions create a ripple effect. You might even be able to inspire people to continue your work once you’ve returned home to Canada.

Siouxsie: Ana, we’re grateful that you care so much for this little stray cat that came into your life. We hope you will spay her … and maybe you’ll be able to start something that moves beyond your home and into your community at large.

Thomas: Keep Colors in a cage overnight after she’s been spayed, so she can recover enough to survive on the streets.

Dahlia: And don’t forget to snip off the tip of one ear while she’s under anesthesia. “Ear tipping” is the universal sign feral cat colony caretakers use for “I’ve been spayed or neutered.”