A few weeks ago, I told you about an exciting new line of natural pet products from Only Natural Pet and encouraged you to make a pledge to decrease your kitty’s carbon pawprint. Today I’m reviewing a few Only Natural Pet products that can get you started on your path to greening your feline friend’s life. 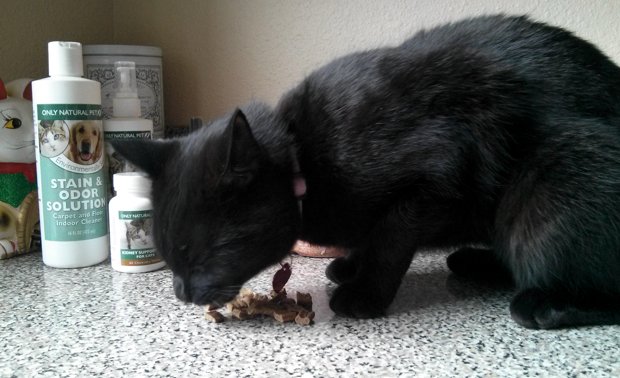 This delightful natural cat food consisting of 90% chicken was a huge hit with the Paws and Effect Gang. Thomas and Bella ate it up with glee, and because it’s grain-free and low in carbohydrates, it works well for Bella, who needs as few carbs as possible to remain in remission from her diabetes. Siouxsie liked it, too, but she found it difficult to eat because she’s missing several teeth. MaxMeat Air-Dried Chicken Cat Food’s jerky-like texture would make it a great transition food for a cat you’re trying to wean away from kibble and onto a more species-appropriate diet.

I filled one of my three litter boxes with this litter and it’s become the place to pee at Paws and Effect HQ. Siouxsie, who has pretty serious arthritis, seems to have found the pine cobble litter more comfortable than my usual corn cat litter, probably because it’s more like sawdust than cobbles. It smells good, if you like the aroma of natural pine wood, and thus far (it’s been in the box for about a week now) it’s provided good odor control. The only drawbacks are that it’s very dusty and it doesn’t clump as well as some other natural cat litter brands I’ve tried. If you don’t mind scooping clumps very carefully and you don’t have a problem with dust, Only Natural Pet Clumping Pine Cobble Cat Litter is definitely worth a try!

3. Kidney Support Plus for Cats

As the mama of two senior kitties, both of whom are showing some early signs of kidney disease, I definitely wanted to give this product a try. It’s an herbal supplement designed to help maintain proper urine pH and mineral levels and aid in renal blood flow, all combined into delicious fish-flavored chewable tablets. The active ingredients include DHA, EPA, astralagus root, nettle, potassium  and B vitamins, all known for their role in supporting kidney function and maintaining general health. This evening I gave Siouxsie and Thomas each a tablet with their supper and they ate it with gusto, and Kidney Support Plus will become a part of their feeding routine from now on.

I hoped I wouldn’t have the chance to test this product, but somebody (I’m not naming names, Bella) got into something she shouldn’t have and had, shall we say, a rather soft and malodorous poop that didn’t all land in the litter box. After I removed as much as I could, I sprayed the liquid odor and stain eliminator on the throw rug that serves as a litter box paw mat and let it sit for a few minutes. As soon as the liquid hit the offending stain, the odor abated significantly. A little elbow grease later, the stain was almost entirely gone. This is not an enzzymatic cleaner; it works by using natural bacteria and nontoxic surfactants. Highly recommended!

I also received Phero-Soothe for Cats, an herbal calming spray whose blend of ingredients mimics “happy cat” pheromones and doesn’t have the odor that some people have noted with other feline pheromone products. If you’re highly odor-sensitive and you want to try some natural pheromones to calm them down, this would be a good choice.

The Herbal Defense Squeeze-On Cat Flea Control I plan on trying later this summer. This product provides a natural alternative to highly toxic spot-on remedies, and because it doesn’t stink of pesticides, your cat might be less freaked out when you apply it.

To learn more and to buy Only Natural Pet products for your kitties, visit the Only Natural Pet Store at Pet360. For a limited time, you can get 15% off your order and free shipping. Only Natural Pet is definitely a brand worth checking out — take it from the very picky felines at Paws and Effect HQ. Our overall rating: 4 Paws Up!

Disclaimer: This post is sponsored by Only Natural Pet on behalf of the BlogPaws Blogger Network. I am being compensated for helping spread the word about Only Natural Pet, but Paws and Effect only shares information we feel is relevant to our readers. This sponsorship did not influence my review. Only Natural Pet is not responsible for the content of this article.