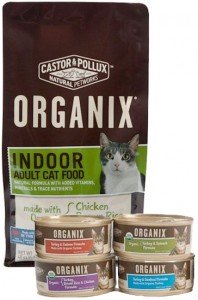 Disclosure: I created this image with digital manipulation so I could display all the products I reviewed in one graphic. The size relationship between the dry food and canned food packages is not accurate.

Castor & Pollux Pet Products is probably best known for its super-premium dog foods. But the company makes cat products as well, including Ultramix and Organix cat food. Recently I had the opportunity to review the Organix Indoor Adult Cat Food kibble and a sampler pack of the four different Organix canned food flavors.

I’m lucky that the cats of the Paws and Effect Gang aren’t finicky about their foods, so it’s not difficult to get them to eat anything. The person you really have to convince is me, because I am very particular about the foods I feed them. After doing some initial research and finding that these products are (mostly) organic and made in the USA, I felt confident that it would be a safe and healthy diet for my cats.

The dry food went down pretty well: Siouxsie, Thomas and Dahlia seemed to enjoy the flavor, and the size and texture of the kibbles were easy for them to get into their mouths and swallow. Although this product doesn’t contain any corn, wheat or soy, it does contain barley and rice, so if you’re watching your cats’ grain intake, you may want to stay away from this.

The indoor formula has lower protein, lower fat, higher fiber and fewer calories than Castor & Pollux’s standard adult cat food. What “higher fiber” means in practice is that they’ve bulked up the fiber content by adding powdered cellulose (indigestible plant fiber like stems and leaves).  I take issue with the lower protein/lower fat thing because cats are obligate carnivores and their bodies are designed to function best on a high-protein and relatively high-fat diet. Also, if you check out the ingredient list on the company’s website, you will see that although a number of ingredients are labeled organic, some — including the chicken meal that comes second on the list — are not. So although the cats enjoyed the kibble, I’m not sold.

Castor & Pollux provided me with two cans each of their four Organix canned food flavors — turkey, brown rice & chicken; turkey & organic spinach; turkey & seafood; and turkey & salmon. The cats were absolutely delighted with each of the flavors and they would happily have scarfed down a lot more of any one of these products. I’m impressed that there are more organic ingredients in the canned foods than there are in the kibble. Pretty much anything that isn’t a mineral is labeled organic.

The only exception to this is the shrimp and salmon ingredients in the seafood flavors, but I can understand why: If it’s wild-caught, there’s no way you could possibly guarantee it’s organic, and if it’s farm-raised — as the vast majority of Atlantic salmon is — it’s definitely not. (If you’d like to know more about the problems with fish farming, here‘s a good start.) In any case, I hope that Castor & Pollux will revise its ingredient label and include the source of their seafood ingredients.

The Organix foods were a hit with the Paws and Effect Gang. Siouxsie, Thomas and Dahlia enjoyed the taste of the kibble and the four varieties of canned food. Siouxsie and Dahlia didn’t have any digestive disturbances as a result of eating the food, but it did give my grain-sensitive Thomas some bowel trouble.

These foods are not grain-free. Rice is a less commonly irritating grain than corn, wheat and soy, so I applaud Castor & Pollux’s choice to stick with brown rice rather than other plant sources. But still, cats are obligate carnivores and they don’t have the digestive enzymes necessary to break down and derive nutrition from undigested grains. If you have a diabetic cat, or a cat like Thomas who gets the gut-gripes when he eats grain, you’re going to have to take that into consideration.

Castor & Pollux has recently released a line of grain-free dog foods, and I hope they get with that program for cats, too.

Full disclosure: I received free samples of Castor & Pollux products for review, but I have not received and will not receive any further compensation. The opinions expressed here are my own, and your results — along with your opinion of the products — may vary.