We Remember Those Who Went Before

Today is Rainbow Bridge Remembrance Day, and we want to take this day to celebrate all the cats who came before us. We’re so grateful to our feline alumni, and today we’re going to honor them and remember their contributions to Paws and Effect.

First, we remember the cats who started it all: Siouxsie Mew and Sinéad O’Kitty. 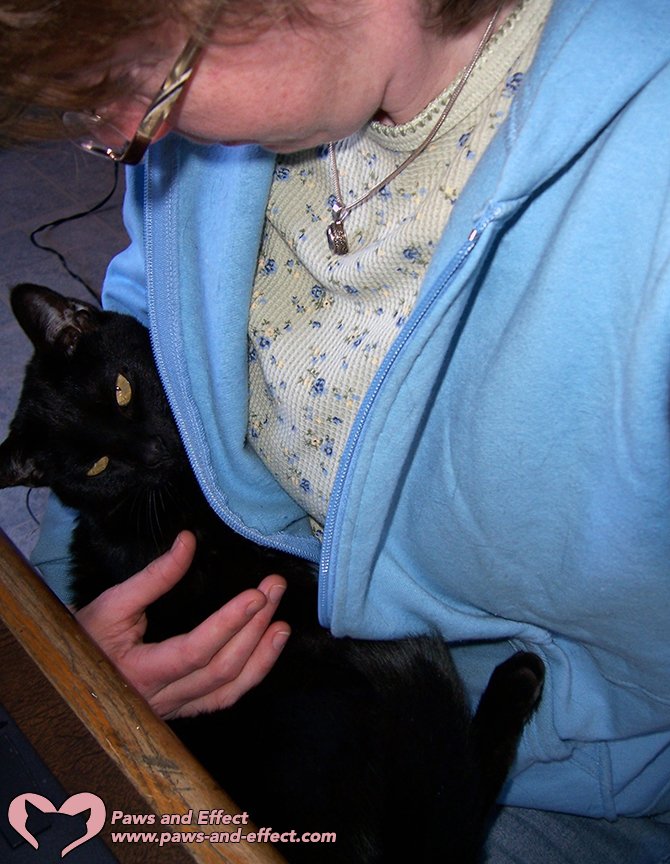 Sinéad and Siouxsie came into my life at the same time: a pair of six-week-old kittens born of a stray cat who had been taken in by a good samaritan. Sinead loved to be held like a baby, as you can see in this photo. She was often the voice of reason and compassion in the original Paws and Effect posts, as she had an innate wisdom about her, and I’ll never forget her beautiful golden eyes. She was lost to us at the young age of 10, when she escaped from our house and wandered into the woods. I never found her body, but given all the coyote noise I’d heard the night she got out, I strongly suspect she was taken by them.

A few nights after she got out, I had a dream where every time I tried to pet or touch her, she was always just a little bit out of reach. I woke up crying, knowing that she had died. 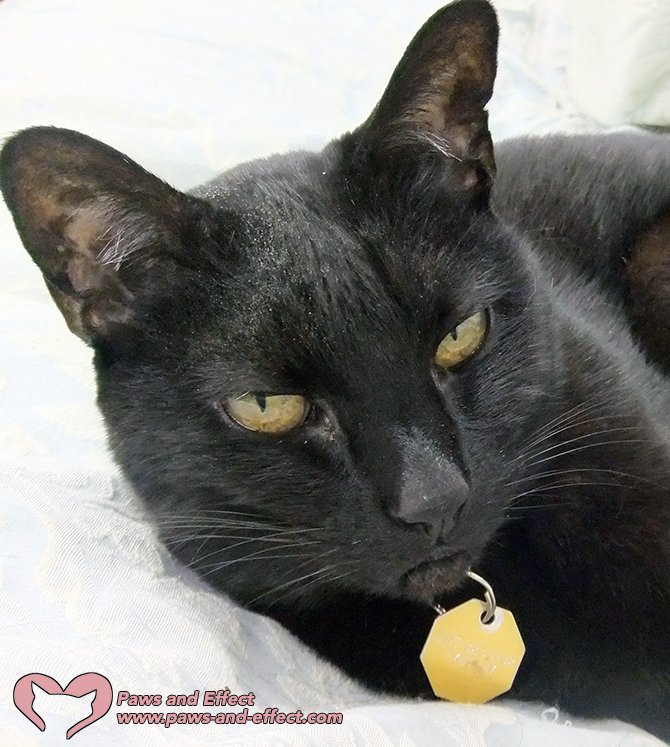 Siouxsie started out as a grump, but she mellowed with age

Siouxsie always seemed to be the grumbly one. For every kind word Sinéad spoke, she had a grump to go with it. But after we lost Sinéad, Siouxsie began to mellow. It may have been age, or it may have been that she didn’t have her pesky sister to bother her anymore–who knows? But she took on the mantle of Top Cat and Queen of All Eastern Cats with grace and dignity. She trained up the next generation of Paws and Effect correspondents and lent her unique voice to every post in which she appeared.

She was in remarkably good health until about the last year of her life, when she was treated (unsuccessfully) with radio-iodine therapy for hyperthyroidism. Her arthritis really began bothering her about six months before she died, and I gave her buprenorphine to control the pain. Finally, after two devastating urinary tract infections, she told me in no uncertain terms, “Mama, I’m done.” I honored her wish and, with the help of a compassionate vet, sent her over the Bridge just a week short of her 19th birthday. 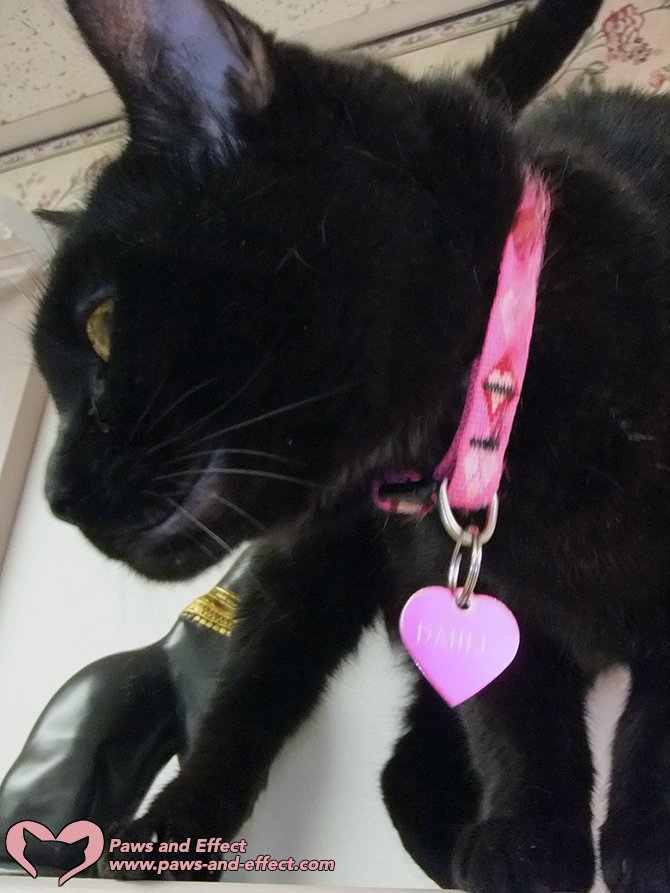 Dahlia only lived to be six years old, but she left a huge mark on all of us

Dahlia came into our lives in September of 2006. I was told she was a 12-week-old boy, but I saw pretty quickly that she was actually a female. A visit to our vet revealed that by the development of her teeth, she was more like five months old–she was just super-tiny for a cat that age. With a good, healthy diet and the love of her snuggle buddy, Thomas, she grew up to be a big, strong cat. I’m in the process of memorializing Dahlia through a memoir called Dahlia Tells All, some of which you can find in this blog. It’s been a hard process writing the memoir because of the circumstances of Dahlia’s death.

Poor Dahlia died at the age of 6 from atypical large-cell lymphoma, and it took me a very long time to process the grief from that gut-punch of a diagnosis. She was a larger than life presence in this blog, and I’ll remember her forever. 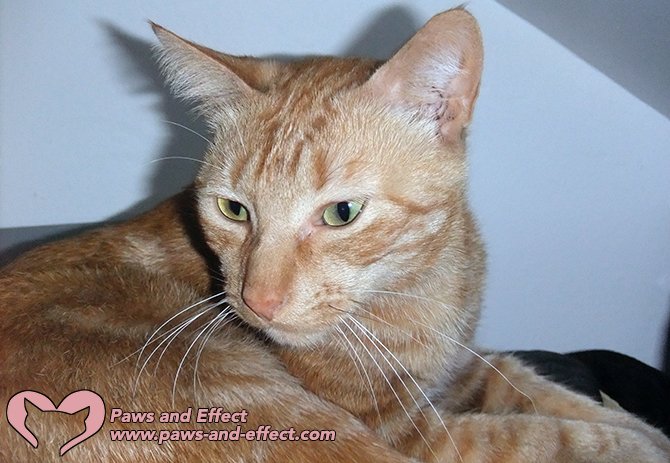 Kissy was a powerful presence, although she was with us for far too short a time.

Chrysanthemum Kiss-Kiss Bobette Jellylorum Kelley, a.k.a. Kissy, packed a lot of spunk into her tiny marmalade-furred body. She’d survived life on the mean streets of a Georgia town and successfully given birth to a litter of five kittens. I met Kissy because she was transported to Kitten Associates in Connecticut, a rescue run by my good friend Robin A.F. Olson and her partner, Sam Moore. Two of Kissy’s kittens died, unfortunately, but Robin and Sam placed the remaining three into wonderful, loving homes. Kissy wasn’t so lucky. She didn’t get along well with other cats and she had a leg injury that required surgery to fix. But after Dahlia died, I felt an emptiness in my home with only two cats. In May of 2012, I drove from Maine to Connecticut to visit Robin and Sam, who I knew from pet blogger conferences, and to meet Kissy as well. It was love at first sight, and I ended up driving back to Maine with Kissy in the passenger seat.

It took Kissy several months to get comfortable enough to hang out in the same room with Thomas and Siouxsie, but when I came home and saw her sitting on the back of the couch, I cried with joy. But Kissy’s leg was still a problem: she favored it and the pain was causing her to be grouchy. After a consult with my veterinarian, who consulted with several other vets and showed her X-rays, we decided that the best choice to end the pain was to amputate the affected leg. She did great during the surgery–I watched and documented it for an article I wrote for Catster–and in her initial recovery. But things soon went sideways, and she passed away due to one of those freak, one-in-a-million complications.

After having two cats die within six months, I was plunged into deep grief and depression, which affected everything from my personal life to my job performance. Eventually I clawed my way out of it, and I decided that my life had to change.

I’d fallen in love with Seattle a long time ago, and after having looked for work there for three years, and not gotten many bites from 3,000 miles away, I decided to throw caution to the wind and move from Maine to Seattle. I gave away or sold anything I couldn’t fit in my car, and Siouxsie, Thomas, Bella and I hit the road for our new life. It was the best decision I ever made, and I don’t regret my move for one hot second. 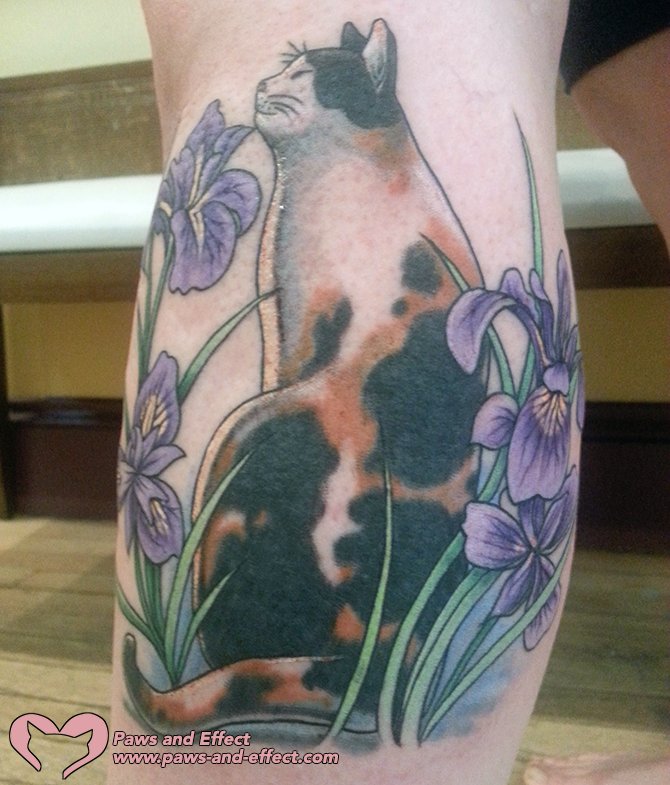 I got this tattoo to memorialize Iris, my first cat teacher.

And there were the cats who came even before them: Iris, my first cat teacher, who is memorialized in a tattoo on my left calf. Shaughnessy, the last kitten from Iris’s last litter. Castor and Pollux, the kitty twins, who my mother allowed me to adopt on my 13th birthday. Purr Bear, the long-haired tuxedo guy, who earned his name because he was huge and all you’d have to do is look at him to get him purring. Donegal, Fitzpatrick and Kirk, three Siamese-cross kittens who came to my home town with a traveling theater actor who couldn’t take them back to his New York apartment, so my mother took them in. 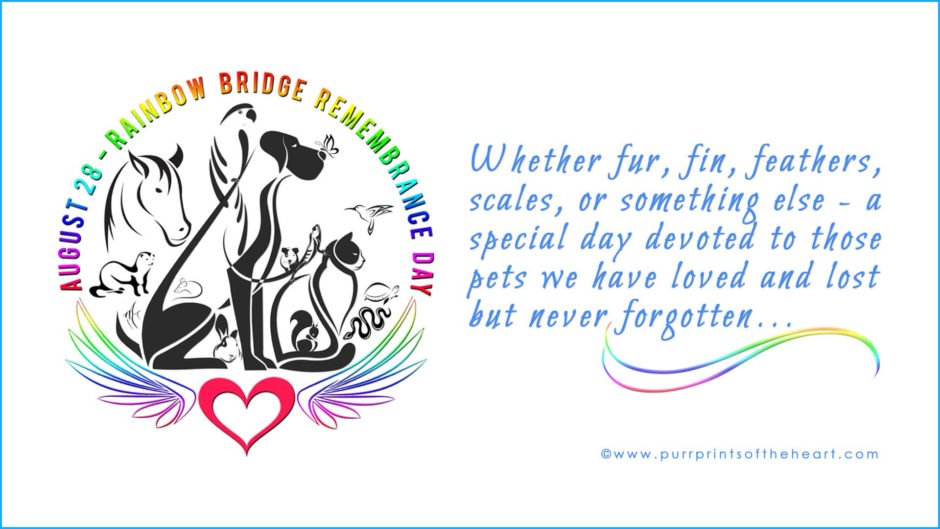 I remember all these cats with love, and on Rainbow Bridge Remembrance day, I share my gratitude for the lessons that all of these wonderful felines have taught me.