Purr! Paws and Effect is honored with an Honest Scrap Award.

Our new friends at Petopia have honored Paws and Effect with the Honest Scrap Award. This award doesn’t come with ribbons or goodie baskets, but it does come with a responsibility: 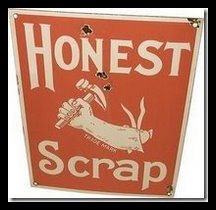 When accepting this auspicious award, you must write a post bragging about it, including the name of the misguided soul who thinks you deserve such acclaim, and link back to said person so everyone knows he or she is real. Choose a minimum of seven (7) blogs that you find brilliant in content or design. Or improvise by including bloggers who have no idea who you are because you don’t have seven (7) friends. Show the seven (7) random victims’ names and links and leave a comment informing them that they were prized with “Honest Weblog.” Well, there’s no prize, really, but they can keep the nifty icon. Next, in your blog, list at least ten (10) honest things about yourself. Then, pass it on!

Here are the seven blogs we want to honor with the Honest Scrap Award:

Now we have to list at least 10 honest things about ourselves: