What do Ellen DeGeneres and the Pets Add Life Campaign have in common? They both want to help shelter pets find homes and share the joy of having four-legged roommates. Now they’re giving you a chance to help by sharing your story of rescuing a pet or doing something amazing for an animal in need … and you could win a cool $5,000 for your time!

Here’s one of my many rescue stories. When I adopted Bella in January of 2013, I had no idea how she’d integrate into my household — but I still wanted to give her a chance. It seemed so unfair that this tiny and young girl had diabetes and that she might spend her whole life in a shelter because so many people are afraid of adopting kitties with chronic illnesses.

I got everything prepared as best I could for my new arrival. I couldn’t keep her in the office, which I had previously used for introducing Kissy, because it was unheated and it was January in Maine, so I set up her litter box, food dishes, a cat-safe electric space heater and a kitty bed in my bedroom and hoped for the best. My apartment was an old house and the French door that connected the living room and the bedroom didn’t close securely, so I fashioned a sort-of-lock with a belt and a nail hammered into the door frame. 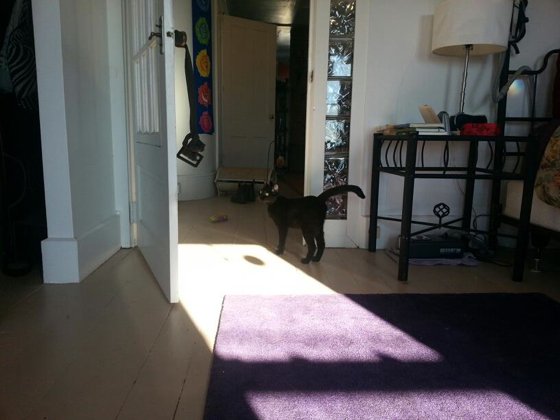 Nothing was going to stop Bella from exploring!

When I returned from my volunteer shift at HART of Maine with Bella, I nonchalantly brought her into the bedroom and closed the door behind me. I let her out of her carrier and she immediately headed for the door. She looked at Thomas, who was staring at her from the other side of the glass panes and gave a little chirp. Then she patted the door, it came open, and out she went. She ran up to Thomas with her tail held high, and I could almost hear her saying, “Hi! I’m a kitten!”

Thomas, who was still grieving from losing his best buddy Dahlia eight months before, just melted when he looked into Bella’s sweet green eyes. There was immediate nose-touching and butt sniffing, and before I knew it the two of them were pals. Siouxsie tolerated Bella, of course, but now Bella and Thomas are as inseparable as he and Dahlia once were. 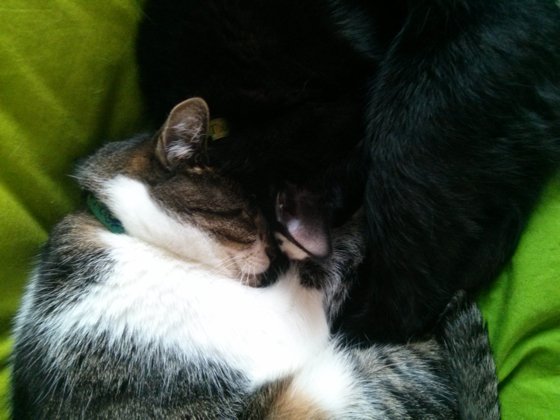 Today I get to see a scene like this at least three times a week. Thomas and Bella are champion snuggle buddies, and when I took this the two of them were so sound asleep that they didn’t even twitch a whisker as I got closer and closer to them to take this photo.

What about you? What’s your favorite rescue story? What’s the cutest introduction you’ve ever seen? Leave a short comment and don’t forget to enter the PAL contest for a chance at that $5,000!

Disclaimer: I am blogging on behalf of BlogPaws Pet Blogger Network and the Pets Add Life (Pal) campaign. I received compensation for my time from Pal for sharing my views in this post, but the views expressed here are solely mine.