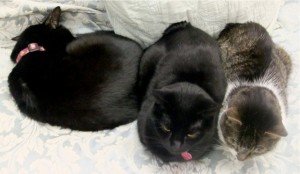 When I heard about the Pets Add Life campaign — designed to demonstrate the joys and benefits of pet ownership and hopefully increase adoption of pets and responsible ownership of pets — and their latest effort to share the many good things about living with multiple pets, I had to get in on the action.

For as long as I can remember, the cats in my life have come in pairs. It started when on my 13th birthday, my mother gave me the present I wanted more than anything else–she said I could adopt a cat! We hopped into the car and went to our local shelter, and the minute I walked in the door I laid eyes on the cutest pair of kittens: twin boys with shiny black fur and tiny white stripes on their chests. Of course I fell in love and persuaded my mother to take both of them. It didn’t take much persuasion — she’s an animal lover, too. We named them Castor and Pollux, after the twins of legend.

The next year we went back to the shelter looking for a dog — and maybe another cat. Pollux had been hit by a car earlier that year, one of the perils of being an un-neutered black cat and living in a rural area where people drive too fast. (Before you give me hell for not neutering my cat and letting him roam outside — it was the early 1980s, and although we loved our cats and did the best we could for them, people just didn’t think like that back then.) This time, we came home with another pair of cats: Iris, a diminutive calico, and Purr Bear, a long-haired tuxedo cat who must have had some Maine Coon blood in him. 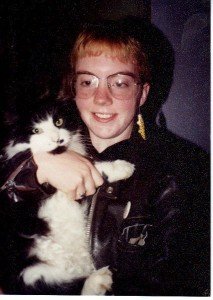 Of course, kittens were an inevitable result of mixed-sex kitty roommates. I served as a midwife to several litters of baby Irises and Purr Bears. Although we may not have been aware of the critical importance of spaying and neutering back then, my mother was aware of her responsibility to find good, caring homes for these kittens. And she did.

A few years later, just as Iris was weaning her last litter of kittens before getting spayed, a member of a traveling theater company, knowing that we had a nursing cat in the house, asked if our cat would be willing to take care of three kittens his mama-cat had borne while he was in Maine. He couldn’t take the kittens back to his apartment in New York, and he knew they still needed mama’s milk. My mother said, “Well, I’ll try, and we’ll see what happens.”

Iris was just as gentle and loving with her adopted babies as she had been with those to whom she’d given birth. And so three boy cats — two Siamese look-alikes and one gray tiger-striped boy — became part of our family. The Siamese guys eventually ran off their tabby brother, I suppose, because one day he disappeared.

Then came four years of college, and I could only get my “cat fix” when I came back home to visit. After I graduated, I borrowed one of the family cats when I moved to my first apartment. Shaughnessy, a big tortie girl, was the last kitten from Iris’s final litter, and she and I moved in with two of my college friends and another cat. Surprisingly, Shaughnessy and my roommate’s cat, Reeba, got along quite well right from the outset.

A couple of chaotic and cat-free years later, I found myself settling into a new town and a new job. Once again, I borrowed Shaughnessy — I really wanted to have a cat in my life — but before long I realized how miserable she was. I didn’t let her outside because I lived right next to a busy road and I knew better than to risk her life that way, but whenever I was home I’d see her perched on the windowsill, looking so achingly forlorn. I could feel the waves of sadness emanating from her, and I knew that as much as I wanted to have Shaughnessy there, I couldn’t in good conscience let her suffer like that. So, with a heavy heart, I brought Shaughnessy back to the family home and returned to my empty, cat-less apartment.

I knew I couldn’t be cat-free for long, though. I decided that what I really wanted was a snuggly black cat (I’ve loved black cats ever since I can remember) who would be happy living indoors with me.

I found my black cat, all right. In fact, I found two — because I couldn’t very well have just one cat; she’d get lonely while I was at work or out at night or doing all the crazy stuff twenty-somethings do. I vowed that I was going to do everything right with these cats: I took them to the vet for their checkups and shots; I had them spayed when they were 6 months old (the vet gave me a discount because I brought both of them in at the same time); and I made sure to feed them the best food I could find.

Those two cats were Sinéad O’Kitty and Siouxsie Mew, the lovely ladies who were the inspiration for, and first authors of, Paws and Effect. Fifteen years later, Siouxsie is still with me, although I lost Sinéad several years ago due to an escape and an unfortunate encounter with hungry wildlife. Thomas joined the gang in 2004, and Dahlia came into our lives in late 2006.

I couldn’t imagine life with just one cat. I just melt when I watch Thomas and Dahlia snuggling together. Trust me, you’ll see why when you check out this video.

Nothing gives me more contentment than having Thomas in my lap, Siouxsie in my arms and Dahlia by my side as I watch TV. We huddled together under the blankets and kept each other warm when we lived in an apartment that got so cold that rings of ice formed in the cats’ water dish and you could actually see your breath in the air on some winter mornings. I laugh when I watch them play together, they comfort me when I’m sick or sad, and nothing can bring me out of a funk more quickly than playing Thing on a String with them.

If you want, go check out Pets Add Life’s Facebook page and share the stories of the cats that have blessed your life. The more we can tell people about the way our animal companions have been a boon to us, the more we can do to help shelter animals find forever homes.

Disclaimer: This post is sponsored by the Pets Add Life campaign and the American Pet Products Association. Although I am being compensated for helping spread the word about the benefits and joys of pet ownership, the opinions expressed here come straight from my heart.