Pets Add Life: If Your Cats Could Speak … 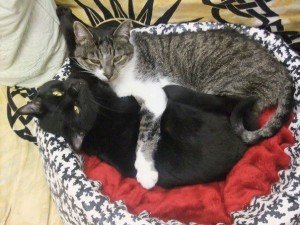 Did you ever wonder what your cats would say if they could speak? Well, let me share with you a little vignette from an early-morning conversation at Paws and Effect Headquarters.

Dahlia: I hate to disturb you, but I really have to go to the litterbox.

Thomas: Can’t you wait just a little while? We’re going to have to wake Mama up soon, and then I’ll get up, too.

Dahlia: But Thomas, I really have to go!

Thomas: But Dahlia, I’m so in love with your deliciously warm fur … your golden eyes … your ear-grooming …

Dahlia: I’ll groom your ears once I get back from the litterbox, I promise. But if I don’t go, I’m going to make a mess all over the throne, and you know Siouxsie’ll be really mad about that…

Siouxsie [from Mama’s room]: What did you say? Are you two in my throne again? And you’d better not be peeing in there!

Siouxsie: Don’t make me come in there!

Mama: Siouxsie, be quiet. It’s Saturday! I don’t have to get up at the crack of dawn today!

Dahlia: Yeah, Siouxsie! So there!

Mama: You too, Dahlia.

Half the fun of having multiple cats is witnessing their conversations, whether they’re vocalized or shared in the sublimely subtle language of ear positions, whisker movements, glances and body language.

Living with cats since I was a small child instilled in me the love of observation as a tool for understanding. My feline companions taught me the value of listening and looking for those subtle signs of emotions and desires.

Aggression is a prime example. Humans generally think a person is aggressive because they’re angry and/or they want to hurt you. But from observing the interactions of cats, I learned that there’s more than one reason for aggressive behavior. Cats are more likely to be aggressive when they’re scared, and I think the same thing is true for many humans.

You might be surprised to know that humans have similar “tells” — which you’ll start seeing everywhere, once you know what you’re looking for.

I don’t know if I would ever have grasped this if it hadn’t been for many years of living with cats. So I’d say that not only have multiple cats added life to my household, they’ve given me a very important education, too.

This is just one of the many reasons I’m supporting the Pets Add Life (PAL) campaign, which is dedicated to sharing the joys and benefits of living with pets and promoting responsible pet ownership. Through their latest series of “Banter” videos, they’re putting a fun spotlight on the many good things about living with multiple pets. The cat video, “Bad Move” is below:

Check out PAL’s Facebook page and share your pet stories, photos and videos with 61,000 other animal lovers around the world.

This post is sponsored by the Pets Add Life campaign and the American Pet Products Association. Although I am being compensated for helping spread the word about the benefits and joys of pet ownership, the opinions expressed here come straight from my heart.