Peace Island Lets You Walk Through Life As a Cat 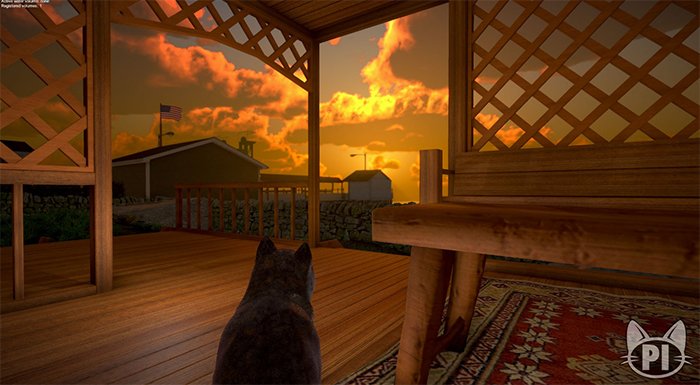 A few weeks ago in our email newsletter, we told you about Peace Island, a cat-based video game currently being created by game developer Eric Blumrich and his partner in game dev and in life, social worker Laura Mackey. I know, I know: you probably think of first-person shooters or violent and graphic epics when you think of video games, but Peace Island is nothing of the sort.

As the game’s name implies, Peace Island actually has no combat at all. It’s an open-world, story-driven adventure game that begins when you, a cat, are put into a carrier by your people and ferried off to an island. You go to sleep, and when you wake up there are no humans to be seen. Your job as a cat is to learn new skills, solve puzzles, find other cats, and together, find out why all the people are gone. And ultimately, you decide: are the humans worth bringing back?

I’ve never been one of those people who really got into video games like Grand Theft Auto or World of Warcraft, but I’m so excited about Peace Island’s focus on non-violent interaction, discovery, atmosphere, and exploration rather than combat that I’ve chosen to support the game’s Patreon campaign. I also got the chance to interview Eric about the game, the inspiration, and the course of its development.

“I’m pushing 50, but I’ve been a gamer since I was 14,” Eric told me. “I had opportunities earlier in my life to work in video games, including a stint at Atari in the late ’80s, but never thought of doing it full-time until recent days.”

“Laura is my co-developer,” Eric added. “She helps out in more ways than I can count, but her main responsibilities are lead writer and quality control officer.  She’s been a gamer since her early days as well, but this is her first development project.”

The inspiration for the game came from a place and a concept. Eric and Laura live in Portland, Maine, the state’s biggest city. “Laura and I have been visiting the islands of Casco Bay for years–it’s one of the perks of living in Portland,” Eric said. “For less than the cost of a movie, you can take a ferry to these island towns, all of which are singularly unique communities. There, you can get away from the noise and light pollution, and see the galaxy stretched above you in the night sky, while listening to the waves crashing against the rocks below. On one of those trips–I forget in which year it took place–we just started talking about making an open-world game like Skyrim or Grand Theft Auto, but non-violent and set on a Maine island.”

And thus, Peace Island was born. 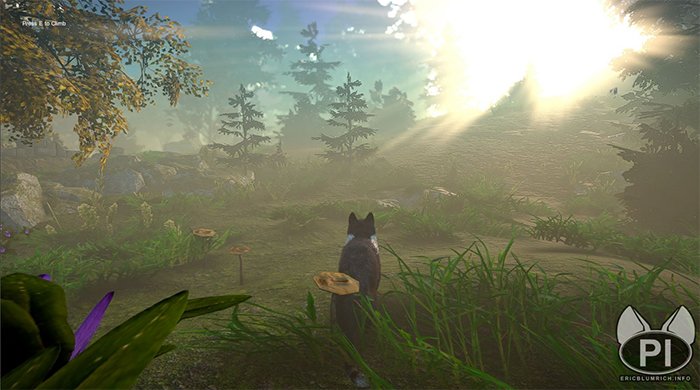 The original idea for Peace Island was a little different than the game’s current form. The player would take on the role of a young veterinarian as she arrives on the island to take over the job of a retiring doctor. After the ferry departed, she would find out that the town and island are empty of humans. The story basically involved the veterinarian’s relationships with the animals, with the cats being the main agents of action in the game. “In the end, we decided it would be a far more engaging experience if we literally ‘eliminated the middle(wo)man’ and let the story unfold from the perspective of the cats,” Eric said. “Allowing the player to unlock and control all nine cats struck us as an especially interesting game mechanic.”

Eric has been a cat guy from his earliest years. He even has photos of him and his sister, at ages 3 and 5, playing with kittens. But if there was any one single cat who influenced the decision to make Peace Island,  Eric says it would have to be one of Laura’s cats, Gary.

“Several years ago, after my first attempt at making a video game went bust, I felt really depressed,” Eric said. “I wondered if I was even suited for making games at all, and would be doomed to being a line cook forever. One night, I was just about to delete Unity (the game development platform we use) and just accept my rather grim fate, when I noticed that Gary had come into the room. On a whim, I figured that I would create a very primitive iPad game for cats–the kind with randomly moving shapes that ‘squeak’ when touched. It took all of about 10 minutes to get the basic coding done. I was sorta on-edge when I showed it to Gary. As it was, he played with that simple game for almost an hour. If he had simply glanced at it and walked away, we wouldn’t be having this conversation now.”

And how did the cats who are the main characters of the game come to be? They’re based on cats that either Laura or Eric have known, met, or lived with over the years.

In the game, there are nine cats–Elizabeth, Suesa, Anin, Zack, Gary, Calineigh, Boy, Girl, and Ronan. Each has their own special skills and roles to play over the course of the game and each has their own story arc and personality. 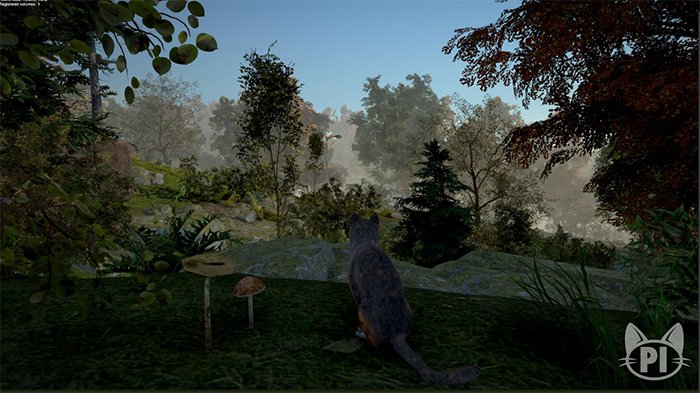 Eric’s life has changed exponentially since Peace Island went viral and the game’s Patreon campaign has brought in enough support that he could quit his job as a line cook and work on the game full-time. But there’s a lot of change that comes from turning a hobby into a major project.

“I’d have to say that the biggest mountain I am having to climb at the moment is understanding all of the legal and financial issues that come with turning something that was a hobby, into an enterprise that will not only guarantee results for the folks who pledged to the project, but also be in compliance with state and federal laws,” Eric told me. “I really don’t have a mind for that sorta stuff, and we are hoping to bring on a business manager that can handle such minutiae going forward.”

The biggest change in Eric’s daily life? “Ya see, back when 40-plus hours of my life each week was being spent in a kitchen flipping burgers, the time I had off was at an absolute premium–I was always in a hurry to take care of all my responsibilities outside of work so that I would have just a few more minutes to work on the game, and maybe get it one tiny step closer to completion. Now that I have an open schedule, I am having to constantly remind myself to slow down and take it easy.  I don’t wanna wind up like Stieg Larssen and drive myself into an early grave just as my career is taking off!”

Wrapping things up, Eric decided to discuss the publicity around the game. “Over the past month, there have been a lot of online articles and posts about Peace Island, and I have probably seen only about 10 percent of them.  I have a feeling that some of these articles might contain erroneous information about the game, such as that is Grand Theft Auto with cats. I must take exception to such a claim because Peace Island will have a much better story than Grand Theft Auto.”

I can’t tell you how excited I am to see how Peace Island develops, get access to betas, and finally to be able to play the full game in all its glory. If you want to learn more about the game, visit Peace Island’s Patreon page for more information about the game and ongoing progress updates. And hey, if you’ve got a little money to chuck their way, I’d encourage you to support Eric and Laura in their quest to develop a video game with an amazing story line and playing mechanics. And cats!