Our New Cats Are Beating Up Our Old Cat. Help!

We had two cats currently in our home, one is almost 5 and the other is 3. We then brought in two newborns who were left near our doorstep when they were about 3 weeks old. We raised them by hand, and they’re now about 14 months old. The problem we are now running into is that the two younger kittens — who are actually now bigger than the 5-year-old cat — are picking on her. Now we’ve come to the point where my fiance is considering finding another home for the 5-year-old cat. I would really rather not do that, but I am not sure where to go from here. We’ve tried having the cat in a room alone during the day to separate her, but then at night when we keep the door open, the younger cats still try to attack her. She is always quite frightened and defenseless. What can we do without removing her from our house permanently? 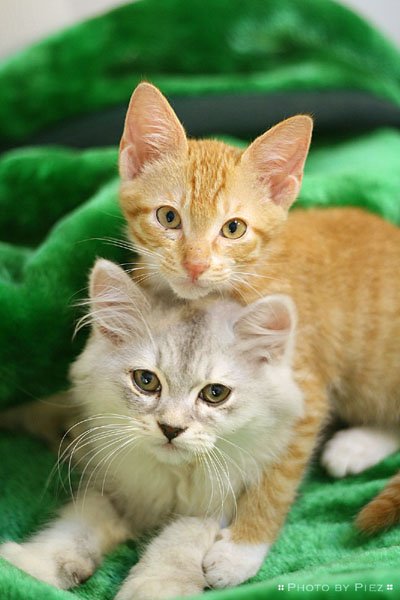 Kittens are adorable, but they can be a handful for an older cat. Two kittens, (CC-BY) by Flickr user Pietro Jr.

Siouxsie: Okay, Kevin. First of all, the older cat was in your home first. If it comes down to having to rehome cats, the best and fairest thing to do is keep your 5-year-old and rehome the kittens.

Thomas: Young cats have a much better chance of being adopted than older cats. Also, you and your fiance made a lifetime commitment to your older cat long before the kittens came along.

Bella: But the good news is that you may not have to rehome anybody. We think we can help you get things sorted out so that your older cat feels better and your kittens have better boundaries.

Thomas: This will boost her confidence and allow her to explore her territory without fear of being jumped by the kittens.

Bella: We’d recommend that you get a couple of Feliway diffusers and place them in the common rooms of your home, particularly in rooms where your older cat has been ambushed by the kittens.

Siouxsie: Leave the kittens in their room for several days, but don’t forget to go in and visit and play with them. The point is that you want to get your 5-year-old used to moving safely and confidently around the house.

Thomas: After a day or so, do “scent swaps.” Take a sock and rub it along the sides of your 5-year-old cat’s face, where her scent glands are. Bring two socks into the kittens’ room and do the same thing with them. Then leave the adult-scent sock in the kittens’ room and the kitten-scented socks in the living room. This will allow your older cat to smell the kittens without the accompanying harassment.

Bella: Here’s some more detailed information about setting up the kittens’ room and introducing cats.

Siouxsie: Another factor that might be at play here is that kittens — even 14-month-old kittens — are just naturally rambunctious. Every once in a while, Bella gets it in her head to ambush me. Of course, since I’m the Top Cat and Queen of All Eastern Cats, I don’t tolerate such foolishness.

Bella: Surprise! I’ve got your head!

Siouxsie: Grrrrr…. stick a sock in it, fuzz-face!

Siouxsie: Anyhow, Kevin … since kittens have lots of energy, they need to play. This whole situation may have started out of the kittens’ desire to play with your older cat. But when your older cat reacted to their silliness with fear, it started a negative feedback loop, which has gotten your kitty family to this point.

Thomas: It’s really important that you spend lots of time in interactive play with your kittens. Feather wands, teaser toys, and all those sorts of things, can be really fun.

Bella: The kittens should be exercised at least 15 minutes a day. The best time for that exercise is before supper because it allows them to have their natural behavior cycle: hunt, “kill,” eat, sleep.

Siouxsie: You should also spend some time playing with your older cat. Play will boost her confidence, too, and make her feel more like she owns her space. Which she does!

Bella: One thing we have to ask: Are the kittens spayed or neutered? If they’re not, that could be playing a role in their aggression, and we’d recommend you have that taken care of as soon as possible.

Siouxsie: If you haven’t done so recently, you might want to take your older cat to the vet for a checkup. Sometimes when cats start attacking other cats, it can be an early sign of illness. Also, he or she will probably have more good ideas to help your older cat and your kittens get along.

Thomas: And remember, if this doesn’t work out and you end up having to find a new home for someone — please keep your older cat and find new homes for the kitten siblings.

Bella: We know it’ll be difficult, especially since you raised the kittens from such a young age, but your older cat deserves to stay with you, and younger cats do have a much easier time finding forever homes.