OMG, My Cat Has The Worst-Smelling Poop Ever! Help! 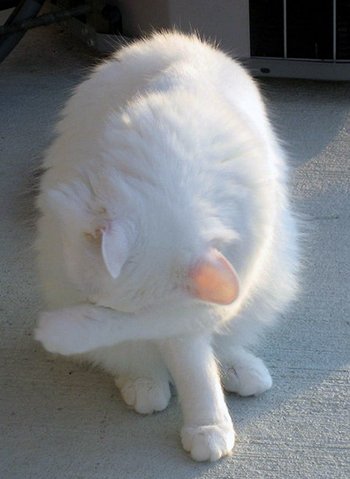 My female kitty, Mello, who is just under a year old, has been stinking up the whole house lately. I understand that poop is in no way supposed to smell like flowers, but her poop smells so awful that it makes me gag! We have three litter boxes, two downstairs and one upstairs, and we clean them all out multiple times a day, every day. Her brothers, from the same litter, do not have this problem, and up until a month ago neither did she. There haven’t been any changes in her diet, she hasn’t gotten into the garbage, she’s not on any new medications since we got her fixed (she does take a monthly wormer and a gets a flea dip and/or treatment every three months). She’s an indoor kitty, and neither she nor her brothers have ever been outside. We don’t have any parasites or pests, and she hasn’t shown any signs of fleas since she was two months old. Any advice on what we can do for my little princess?

Siouxsie: Well, Dia, there are a couple of things that could be happening here.

Thomas: First, we don’t know how long it’s been since Mello was spayed, but sometimes the hormone changes and the drugs used for anesthesia and pain management can change the chemical balance of the body, which can cause the odor of pee and poop to change.

Bella: But we think the most likely culprit is food.

Siouxsie: We know you said you haven’t changed Mello’s diet, but it’s not unheard of for manufacturers to change the formula or substitute ingredients in cat foods. Some cats can tolerate this better than others.

Thomas: It may be that Mello’s brothers have tougher digestive systems and so they’re not reacting in the same way to whatever changes might have been made in the food.

Bella: Whatever the case, it’s absolutely not normal for a cat to have such horrific-smelling poop that it makes you gag and makes her want to get away from it as fast as she can!

Siouxsie: We’d recommend that you call your vet. He or she might have some insights for you, or possibly a digestive supplement that might help Mello’s good gut bacteria to flourish and minimize the smell.

Thomas: Then you might want to try a different food — maybe a limited-ingredient diet, which might help to calm down her “grumpy guts.”

Bella: For odor control, there are a number of options you have. Do not use products like spray air fresheners because cats’ noses are very sensitive and they’re so strong that they could actually keep the cats away from the litter box.

Siouxsie: Baking soda is a great natural deodorant. A number of Mama’s friends have had good experiences keeping litter box odor under control with the Critterzone Air Naturalizer, too.

Thomas: The Critterzone’s not cheap, but if it does a good job, we figure it’s well worth the cost.

Bella: UV air sanitizers can also help. Those vary tremendously in price, but Mama has other friends who have had good luck with those as well.

Siouxsie: If you just want to get a regular air purifier and plug it in near the litter boxes, that would probably help, too.

Thomas: Keep your litter boxes in well-ventilated areas so you can open the windows and let the stink out.

Bella: What about you other readers? Have you had a cat with horrible-smelling poop? How did you keep the odor under control, and what did you do to help your cat deal with whatever was going on in their body that caused their poop to reek? Share your answers in the comments, please.