My person tried to put a collar on me! Will I ever trust her again!

My name is Ivan and I’m a 4-month-old Siberian. Everything was going great in my new home–my human knew her place and brought me toys, snuggles, food, and nip. And just recently she let me out of my nursery to explore the rest of the apartment. Then she put me back in the nursery, slammed the door, and went away for an hour. When she came back, she tried to put a thing called a collar around my neck. And the worst part of it was IT HAD A BELL! Every place I moved, “tingle, tingle tingle!” She eventually caught me after a rousing chase and even though I squirmed she took it off. Now she’s trying to act like it never happened and make friends with me again. But I know she really wants to put that awful collar back on (she took off the bell). I’m currently hiding under the bed and I’m not coming out. Will I be friends with her again?

Siouxsie: It is very hard to tolerate when your human springs the whole collar thing on you, isn’t it?

Thomas: Some humans just don’t have a good grasp on the timing of how such things should be introduced. 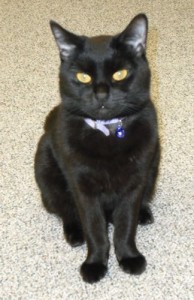 Dahlia: The first thing you can do, Ivan, is to change your perception of this device. It’s really not a collar; it’s a necklace. I’ve been wearing necklaces since I was very small, and I have to say my awesomely cute lavender necklace with a flower on it is much nicer than the plastic band I had to wear around my neck at the shelter!

Siouxsie: I wear a necklace, too. It’s black and has diamonds on it, which suits my status as Top Cat and Queen of All Eastern Cats. Mama knows enough to make sure my necklace doesn’t have a bell!

Thomas: And my necklace is a very handsome royal blue. My necklace does have a bell, and I tolerate it well enough. When I went outdoors, Mama wanted to make sure it was harder for me to catch chicks and baby bunnies … but I know how to move without making the bell jingle.

Dahlia: I love my jingly bell! In fact, I go out of my way to jingle it!

Siouxsie: I’ll tell you a secret, Ivan: I understand what you’re going through. When I was a kitten, Mama tried to put harnesses on my sister Sinéad and me! We lived in a place that was too dangerous for us to go outside all by ourselves, but she thought it would be fun to take us for walks so we could get fresh air. And harnesses are a lot worse than collars, let me tell you! Sinéad and I both ran around backwards trying to get out of them until Mama finally caught us and took them off. Never allow your human to subject you to that kind of indignity!

Thomas: Honestly, collars aren’t that bad. If your human puts it on loosely–so she can get three fingers under it–you’ll barely even know it’s there after a few minutes.

Dahlia: Some cats tolerate necklaces much better than others. Like I said, I’ve been wearing a necklace since I was a tiny little girl. Siouxsie and Thomas just started wearing theirs a couple of years ago, but they’ve been enjoying them.

Siouxsie: We think part of the problem is that your human picked the wrong time to introduce the collar to you. You’d just gotten out to explore beyond the walls of your nursery for the first time, and even though this was very exciting it was kind of stressful, too. Then she imprisoned you in your nursery again and put the collar on you. It must have seemed like some kind of punishment!

Thomas: We do think you and your human can be friends again. She just has to be patient with you, and she absolutely should not try to reintroduce the collar any time soon. You’re going to have to learn to trust that horrible things won’t happen if you get near your person.

Dahlia: In a few months, your human should just leave the collar where you can explore it and play with it. That way it’ll start smelling like you, and it won’t be so awful to have it on. She shouldn’t put any big, heavy tags on it or anything.

Siouxsie: And, of course, when you do get comfortable with the collar and she puts it on, she should absolutely make sure it’s loose enough.

Dahlia: When you’re a grown-up cat, Ivan, you’re going to be really big. Male Siberians can weigh 15 to 20 pounds! And a super-big cat like you may even need a 12-inch collar.

Siouxsie: Another important thing for humans to remember is that if they get collars for their cats, they need to check frequently to make sure the collar isn’t getting too tight. This is particularly true for kittens because they’re always growing.

Thomas: A too-tight collar is not only uncomfortable, it can rub the fur off your neck and even interfere with your breathing.

Dahlia: The most important thing for you to know, Ivan, is that your human wants you to wear a collar because she loves you. If you accidentally get outside and get lost, your collar will tell other humans that you have a home and that someone is missing you.

Thomas: So try not to go too crazy about the collar. Let your human reintroduce it to you, slowly and patiently, and before you know it you’ll be wearing your necklace with pride.