My Kitten Is Scratching Me to Bits! Help!

Help! We have a 6-month-old rescue kitten, Theo. He’s pawsome … except for the claws. I’ve trimmed them. But he insists on clawing my legs when I’m sitting here at my desk. My legs are covered with puncture marks from him trying to play with me. I play with him several times a day with a feather wand and other types of play. We have another cat, my grandkittygirl, Beatrix, we’re slowly introducing him to. I hope they can play together soon!

I know I’ve scared him a couple of times because he’d sink a claw in deep when I wasn’t expecting it and I’d yell out, “OW”! I don’t want to traumatize him! What’s a good way to get him to quit sinking his claws in to my legs … short of Kevlar pants, that is.

Thomas: You were a kitten once, too, Siouxsie. And from what Mama tells me, you sank your claws into plenty of ouchy places when you were little.

Bella: Yeah, and you still do, like when you lose your grip when you’re climbing onto Mama’s lap.

Thomas: Bella, do try to have some respect for your elders. Siouxsie deserves some peace and quiet at this point in her life, so stop teasing her.

Siouxsie: Anyway, Barbara, it sounds like you’re doing everything right as far as playing and claw trimming, but you may just have to do more of it.

Thomas: Kittens have tons of energy to spare, and when they’re clawing and scratching, they’re trying to exercise their hunting behavior.

Bella: We don’t know what Theo’s full story is, but if he was in a place with lots of other cats, he may just be bored. After all, he is a kitten.

Siouxsie: If he was a bottle baby or an only child, he may not have learned “kitty rules” about when to keep his claws in.

Thomas: Regarding the playing, you’re going to have to play with him until he’s exhausted and panting. That will help him get all his baby-kitty crazies out. You may have to have three or four intense play sessions a day.

Bella: It’s also natural for kittens to practice their hunting skills. Unfortunately, he’s ambushing your legs rather than a mouse. If you’re away from home a lot and you need to give him an appropriate outlet for his hunting instincts, try a motion-activated toy.

Siouxsie: We’re sure you have plenty of scratching posts and pads for him to use if he needs to sharpen his claws. Tempt him over to the scratching surfaces by scratching your fingernails on it. When he comes over and uses his claws on the posts and pads, give him positive reinforcement in the form of a treat.

Thomas: Obviously you can’t yell at Theo because that will harm the bond you’ve developed with him and could cause him to become fearful toward people. But what you can give him consistent reminders that hunting mama’s legs is going to have consequences he may not like.

Bella: Don’t be afraid to say “Ow,” though. Kittens learn appropriate play boundaries by getting squeaked at by their siblings if they scratch or bite too hard.

Siouxsie: So do a variation of our “Ow, and Down” method: When he scratches or latches on to your legs, say “Ow!” in a high-pitched voice, then gently pick him up, put him outside your office, and close the door.

Thomas: If you don’t have a door in your office, maybe you have a time-out room you can put him in for a minute or two.

Bella: If you use this gentle method of boundary-setting consistently, and combine it with extra play time, the behavior should abate. And once you’re able to introduce him to Beatrix, she’ll certainly teach him the rules of proper playing. 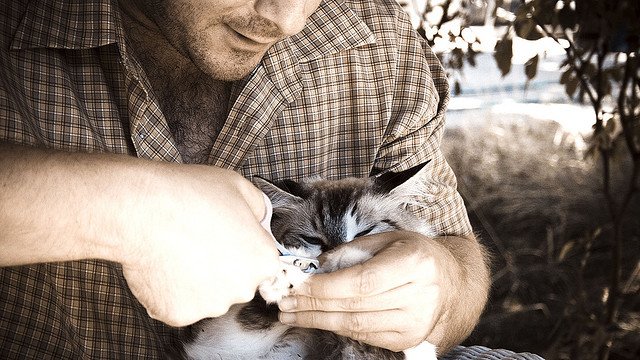 Nail trimming can be a difficult chore, but it’s very important for your kitty’s health and care. Photo CC-BY-SA Will Keightley

Siouxsie: By the way, we know a lot of you other readers wonder how on earth you could ever get your cat to sit still for a claw trim. Claw maintenance is a crucial part of cat care, because when claws grow too much they can actually curl around and poke into a kitty’s paw pads, and that hurts a lot!

Thomas: Dr. Christianne Schelling’s video tutorial on how to trim your cat’s claws will give you some great tips on how to do the job quickly and correctly. Check it out here.

Bella: Do any of you have other tips to help Barbara manage her pokey, scratchy kitten? Please share them in the comments!