My husband likes to pull our cat’s tail. Help!

My husband insists on pulling our 15-year-old tabby’s tail. He says he read that cats like this type of thing. There doesn’t seem to be any ill effect from his actions, but because our cat is a senior now and we love her so much and I feel this is a rather violent act, could you offer advice regarding the damage tail pulling can do, not to mention the emotional insult to the cat? My husband loves Pepi, treats her like a princess otherwise – however insists on his daily tail pulling exercise. HELP!

Siouxsie: Well, Katie, tail pulling is very high on our Not Recommended list. And here’s why.

Thomas: Let’s start out with a quick lesson on the anatomy of the cat’s spine, tail, and spinal cord. 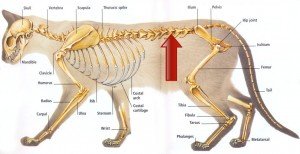 A cat's skeleton. The red arrow points to the fifth lumbar vertebra, which is where the spinal cord ends. Image courtesy of Free Pictures of Kittens and Cats.

Dahlia: A cat’s spine has more than 50 bones: seven cervical (neck) vertebrae, 13 thoracic (mid-back) vertebrae, seven lumbar (lower back) vertebrae, three sacral (hip) bones that fuse into one bone mass that connects to the cat’s tail, which has 21 to 23 bones.

Siouxsie: The spinal cord, the bundle of nerves that sends messages from the brain to the rest of the body, ends at the fifth lumbar vertebra.

Thomas: Nerves that control the back legs, tail, bladder, bowels, and other important functions, branch out from the end of the spinal cord. If these nerves are stretched too much, they can lose their ability to carry signals from the brain.

Dahlia: So, although some cats do enjoy having their tails gently tugged as part of their daily affection routine, hard tail pulling cat result in nerve trauma that leads to paralysis.

Siouxsie: That being said, in a younger adult cat you’d have to yank pretty hard to cause such injury. But as cats age, they start losing muscle mass around their hips, legs, and tail head (where the tail joins the body). Because of this, we’d think a senior cat would be much more likely to be hurt by a tail-tug that might have been fine when she was younger.

Thomas: Kittens, of course, should never have their tails pulled. They’re far too small and fragile for this kind of treatment and could be severely and permanently injured!

Dahlia: As cats age, many tend to develop arthritis; as a result, they may be sore around the hips and tail head, especially when they first get up from a nap. That’s part of the reason Siouxsie’s so grumpy all the time …

Siouxsie: My claws don’t bother me, and it would do you well to remember that, you little brat! Don’t you “Aunt Siouxsie, Aunt Siouxsie” me the next time you want a bedtime story! Besides, I get special treats that make my hips feel better, and you don’t! Humph.

Dahlia: Some cats enjoy having their tails gently stroked as part of a petting routine. I particularly love long, slow strokes from the top of my head to the end of my tail.

Siouxsie: Katie, you didn’t tell us how Pepi reacts when your husband pulls her tail. If she turns around and snaps at him, or if she growls or runs away when he’s done, that’s a pretty clear indication that she doesn’t like it or it bothers her.

Thomas: But even if Pepi doesn’t show obvious signs of distress, we strongly recommend against tail pulling on any cat, of any age.

Dahlia: Well, if you’re an animal chiropractor who specializes in working with cats, you can probably get away with it. But no lay person should ever pull a cat’s tail.