My cat’s got “runways” in his fur. What can I do about this?

I have two cats, Sergei and Buddy, both male, both fixed. Sergei is around seven years old, Buddy is probably around two or three. A little history: I’ve had Sergei since he was around 9 months old. He was rescued from a cat hoarder’s home, lived in a shelter for several months, and then came home with me. He’s pretty much perfect – tolerant, a little grouchy, and very snuggly. He’s used to being around other animals; in fact, my former roommate’s male cat was his best friend, and he even got on fairly well with my dog.

About a year after my dog died, I realized that Sergei needed a companion animal. We found Buddy through the want ads; his owner, an elderly lady, had passed away, and no one wanted him. He’s very affectionate, a little on the chunky side (kind of a pig when it comes to eating), and the previous owner had him declawed.

Sergei and Buddy get along pretty well. They tussle now and again, but I’m just as likely to see them curled up together or grooming each other. It’s the grooming that has me worried. Buddy’s favorite place to groom Sergei is on a diagonal from his eyes up to his ears. He’s licked Sergei there so much that the fur is thin. Sergei usually has a thick coat, like a Gund stuffed toy, but there’s a distinct almost runway look where Buddy licks him.

How can I stop this? I don’t think it’s stress related; Buddy’s been part of the household for months and has settled in wonderfully. I think it’s just an attachment to this particular part of Sergei’s body. It doesn’t seem to bother Sergei; he’ll go up to Buddy and lower his head like he’s asking to be groomed. But I worry about him going bald there, or what will happen when the sensitive skin is totally bare.

Siouxsie: We don’t think you have to worry too much about Sergei’s thin hair, Ames.

Thomas: Cats naturally have patches of thin fur running on a diagonal line between their eyes and their ears.

Dahlia: We have a lot of scent glands in that area, which we use when we bump and rub our heads against humans, furniture, and other things that belong to us. 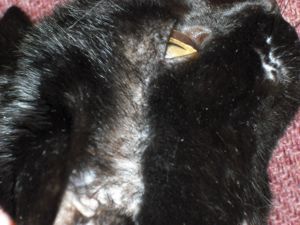 Siouxsie demonstrates the thin fur between her eyes and ears. Mama pulled her ear back a bit to make the thin spot more obvious.

Siouxsie: The fur tends to get thinner in this area as cats age, so it becomes more noticeable in older cats. In this photo, you can see the thin spots in my fur.

Dahlia: My temporal fur isn’t that thin yet, ’cause I’m still practically a kitten.

Siouxsie: You can probably see a tiny patch of pigment on my skin, too; it’s about halfway between my eye and my ear.

Thomas: These thin areas are especially noticeable when the fur is wet: after the cat comes in from the rain, for example, or after being groomed.

Dahlia: It’s not surprising that Buddy would enjoy grooming Sergei there. Since he loves Sergei, he probably loves Sergei’s scent, too. And as a rule, we cats love being groomed around the top of our heads by other cats since we can’t reach there with our own tongues. I love it when Thomas grooms my head!

Siouxsie: Don’t start with that “Ooh, Thomas this and Thomas that and Thomas is so wonderful” business. I don’t want to have to come over there and swat you. 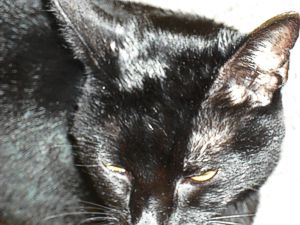 Thin fur between the eyes and ears is more visible in older or dark-haired cats.

Thomas: You know, Siouxsie, we’d be happy to groom you, too, if you’d just let us.

Dahlia: Yeah! You don’t have to be so tough! We know you like snuggles just as much as Thomas and I do.

Siouxsie: I don’t care about any darn cat-snuggles. I get all the snuggling I need from Mama!

Thomas: Anyway, Ames, as long as Sergei’s skin doesn’t start looking raw and irritated, we don’t think you need to worry about Buddy’s desire to groom his head.

Dahlia: You look really pretty in that picture, Siouxsie.

Siouxsie: Oh, stop. …  On second thought, you can go ahead and adore me all you want.

Thomas: If Buddy’s behavior is resulting in skin irritation, you may want to consult with your vet to see if he or she can give you some information about how to stop the behavior.

Dahlia: If not, we’d say just let the two of them enjoy grooming each other.