My Cats Are Attacking Each Other. Help!

All of a sudden, my 10-year-old female calico and my 5-year-old male tabby (both of whom are neutered) have started attacking my 1-year-old female. They have been together for a few months now and seemed to get along, even when we moved to a new house. But last week when I came home from work, the two oldest had the youngest cornered. I keep them separated by leaving the older ones in my home office, which is where their food, water, and litter box are, with the door shut at night and let the youngest one have the run of the house; then in the morning, I put the youngest one in a room with everything needed, and let the older ones have the run of the house. But when I try to reintroduce them, they hiss and growl at each other. One of the older ones got out once, which resulted in a bad fight. I am my wits’ end — I don’t want to get rid of any of them, but if I must, I will find a new home for the youngest, as the other two get along with each other. 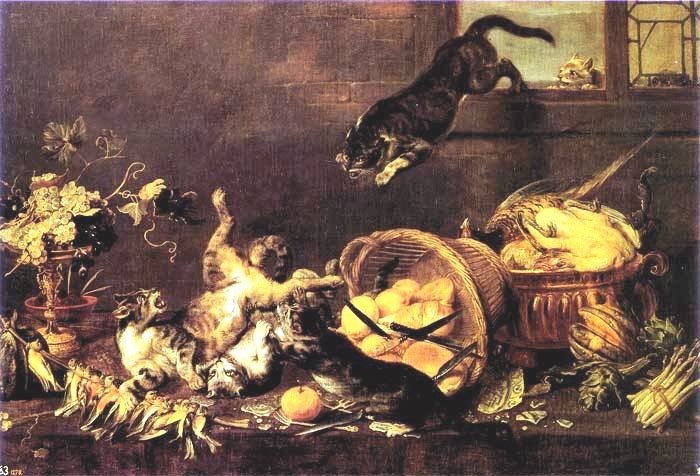 Siouxsie: This type of seemingly unprovoked aggression is terribly frustrating because there’s no way for you to know exactly what brought it on.

Thomas: It sounds to me like something happened while you were away at work on that fateful day. Maybe the older cats saw another cat in the yard and, being unable to take their aggression out on the intruder, redirected it toward your newest family member. Or maybe they all got terrified by a strange noise or other chaos, and again, the older cats responded by taking their fear out on the younger cat.

Dahlia: Whatever happened, you and your cats now have a very unpleasant situation to deal with. The good news, Laura, is that you’re on the right track with understanding that the kitties need to be separated and reintroduced.

Siouxsie: The other good news is, we think you can get past separation, which is where you are now, and get them spending time together again without hostility. It will, however, take time and patience.

Dahlia: Feliway is a synthetic “happy cat” pheromone which has a very good track record with helping reduce inter-cat stress. Although it’s marketed primarily as a way to stop inappropriate urination, it works well for cat-on-cat aggression, too.

Siouxsie: Start the reintroduction by exchanging smells. Do this by rubbing a sock or wash cloth on each cat, particularly around the head and cheeks if they’ll let you, because that’s where a cat’s unique scent is strongest. Put the sock with your youngest kitty’s scent in the room with the older cats, and put the two socks with the older cats’ smells in the same room as the younger cat.

Thomas: Once the cats seem to cope with each other’s scents without getting upset, then it’s time to move on to teaching them that awesome things happen when they’re together peacefully.  One way to do this is to feed the cats on either side of the door that divides them. You might want to start with each bowl several feet away from the door at first, then gradually move them closer. (This is more easily done with two people, so one person on each side of the door can monitor the cats’ behavior.)

Dahlia: Once you’ve got them eating about a foot away from each side of the door, then you can start with the physical reintroductions. I’d strongly recommend that you introduce one of the older cats at a time, otherwise the young cat is going to feel overwhelmed and go into a defense mode that may trigger the other one’s aggression.

Siouxsie: It’ll also be easier to provide fun interactions if you have two cats at a time. I’d recommend using two teaser toys, one in each hand. In the morning, play with two of the cats “together, separately” so they start associating fun and pleasure with being in the same space.

Thomas: Then in the evening, bring the other older cat out of the room and play with the older and younger cat the same way.

Dahlia: If it looks like the cats might be starting to be able to spend time together, I’d recommend that on a day you’re home from work, you bring out one of the cats (whichever one seems to be less hostile toward the young cat) and allow them some supervised time together in the same room.

Siouxsie: Have your teaser toys on hand and keep an eye out for early signs of aggression — staring, ears back, etc. — so you can redirect the aggression into playing with the toy. What you want to do is make the experience pleasant for both cats, and you don’t want them to get back into hissing and fighting mode. Once your cats are done playing, put the older cat back in her room. Do this later in the day with the other older cat.

Thomas: Keep doing this, increasing the time the cats share together. Once your younger cat is getting along well with one of your older cats at a time, try reintroducing all three of them — again, with cat toys in hand if distraction is needed.

Dahlia: Another thing you’ll want to do is make sure you’ve got plenty of cat trees and other high places for your cats to hang out. Cats see their territory in vertical as well as horizontal terms, so the more levels you give them to hang out, the more territory they have to share.

Siouxsie: And the more territory they have, the happier the cats will be.

Thomas: A recent episode of the Animal Planet TV show “My Cat From Hell” actually featured Roxy and Max, a pair of cats that had suddenly become aggressive toward one another. The show’s host, animal behaviorist Jackson Galaxy, showed their caretakers how to reintroduce the cats and gave them several of his Spirit Essences flower remedies to help resolve the energy pattern that was creating the aggression.

Dahlia: Say what you will about holistic remedies, but between the reintroduction and the flower essences, the cats became friends again. If you want to learn about the essences he used, check out his blog post on the subject.

If you like this post or you’ve learned something from us over the years, please nominate us for an About.Com Readers’ Choice Award for Best Website About Cats. Just click this link to go to the nomination page. (You’ll have to be logged in through Facebook or About.com in order to submit your nomination.)