My Cat Is Freaking Out. Is She In Heat?

My feamle kitten won’t stop meowing and moaning, she won’t play much and constantly cleans her genitala area. I heard that this could be something to do with her looking for male cats but I am worried. If this is the case, will her being spayed resolve the situation? 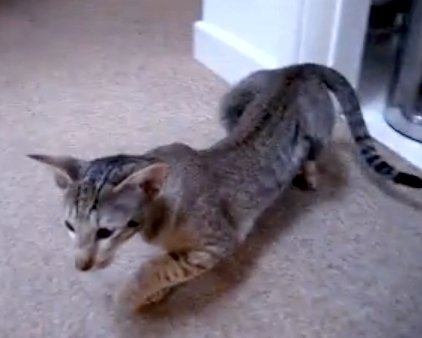 This Oriental cat is in heat. Notice her sway-backed position and her tail to the side.

Thomas: Female cats in heat also tend to roll around on the floor and assume the classic “butt up, tail to the side” position. Here’s another video featuring a quieter but much more active kitty in heat (and yes, the kitty’s caretaker had her spayed shortly after this video was taken, according to the caption).

Dahlia: Licking the genitals is also part of the behavior of a cat in heat.

Siouxsie: Cats come into their first heat between six and nine months of age. But Oriental breed cats and those with Oriental genes in their ancestry can come into heat as early as five months old!

Thomas: When a cat that young gets pregnant, her body is not ready to carry kittens. She’s still not fully grown, and there can be serious complications.

Dahlia: Cats in heat are amazing escape artists, and if your kitty gets out for even a few minutes, she could get “knocked up,” as some of you humans say. You’d better believe that if she’s in heat, there are lots of male cats who’ve heard her calls and smelled the alluring aroma of a queen that’s ready for some action. 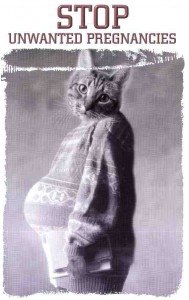 Siouxsie: But — and this is a big “but” — these symptoms can also indicate a urinary tract infection (UTI). We’re a little concerned about this considering that you say she’s not playing much. Check out the videos we linked above to see cats in heat, and if your cat is not behaving like they are, call your vet immediately! UTIs can be life-threatening if the urethra gets blocked and the cat can’t pee.

Thomas: In any case, you need to call your vet and tell him or her about how your cat is behaving. They may want you to bring her in for a checkup just to be sure, and you really should make an appointment to have her spayed as soon as possible.

Dahlia: Because yes, spaying will keep her from carrying on like this ever again.

Siouxsie: And you’ll be doing all feline-kind a favor by ensuring that your cat won’t bring any kittens into the world. Shelters are bursting at the seams with unwanted cats from unplanned litters of kittens, and if every single one of you humans do your part to spay or neuter your kitty friends, you’ll do a lot of good!

Thomas: While we were looking for videos of cats in heat, we found this one from the You’re Doing It Wrong files: a neutered male has the general idea about servicing his in-heat housemate, but … well … things aren’t going quite as planned.

Dahlia: Tee hee hee … oh, I mean “Poor little kitty!” I sure hope that tortie’s mama got her spayed as soon as she was done being in heat.