My Cat Is Always Sneezing. Help!

My cat Mary is sneezing and sneezing. Sometimes she has a clear runny nose. The vet has treated her with three different types of antibiotics, and has even given her steroids and an allergy shot — and she’s still sneezing! She was tested for feline leukemia and FIV, and both tests were negative. I had a scope put up her nose to see if there was anything in there that was causing irritation. The vet found nothing, and Mary is still sneezing. Any ideas?

Siouxsie: You’ve certainly done all the right things, Sharon, and we commend you for that. This must be tremendously frustrating for you and for your kitty!

Thomas: If she’s been on several rounds of antibiotics, that would most likely rule out any bacterial infection. 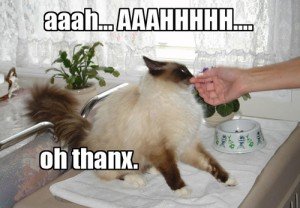 Siouxsie: Antibiotics don’t treat viruses, though, so if your kitty has some kind of chronic viral infection like feline herpesvirus (also known as feline viral rhinotracheitis), which can come and go, that could still be causing problems.

Thomas: But as you’ll see if you click on the link in Siouxsie’s answer, herpesvirus infections often involve purulent eye discharge as well as sneezing.

Siouxsie: We assume your vet has ruled out herpesvirus and other chronic infections, since it seems he or she has been very thorough in trying to figure this out.

Thomas: In that case, she may be sneezing so much because there’s something in her environment that’s causing an allergic reaction.

Siouxsie: Has Mary always been sneezy? If not, about when did it start? Did you change something back then? For example, did you move to a new house? Start using a new laundry detergent, cat litter or air freshener? Bring in a new carpet? Change your heating or air conditioning system?

Thomas: Is your cat’s sneezing worse at different times of the year? If so, she may be suffering from hay fever (hey, don’t laugh — cats can get hay fever).

Siouxsie: Does she sneeze more after she’s used the litterbox? If so, the dust may be bothering her.

Thomas: There are some things you can do to keep the allergens in check, which may make Mary’s life easier and more sneeze-free.

Siouxsie: First of all, stop using any kind of scented detergents, fabric softeners, dryer sheets, plug-in or spray air fresheners. They might smell nice to you humans, but our noses are much more sensitive than yours — and to us they reek!

Thomas: If you smoke in your house and you’re not ready to quit, we’d strongly recommend that you only smoke outdoors. Cigarette smoke is very irritating even for kitties that don’t have allergies. You probably should cut out burning incense, too.

Siouxsie: Use a scent-free cat litter that’s as dust-free as possible. Usually the pellet types are the least dusty and clay litters are the most dusty. However, a lot of the organic-based litters like wheat-, pine- and corn-based can be very dusty, too.

Thomas: If you’re into using non-clay litters and want to keep the dust to a minimum, try Blue Naturally Fresh. It’s made of walnut shells, and Mama’s been using the multi-cat clumping formula with us. It’s almost totally dust-free, it clumps like concrete, and it works really well to keep the odors down.

Siouxsie: We’d recommend that you invest in a high-quality air purifier and put it in the room where your cat spends the most time. This will filter out most environmental contaminants such as mold, pollen and dust mites.

Thomas: A humidifier might also be a good idea. If she’ll tolerate it, you could even bring her in the bathroom with you while you take a shower so she can breathe some nice warm steamy air.

Siouxsie: One more thing to consider: If your vet hasn’t already looked in your cat’s mouth to see if her teeth are OK, you might have him or her do that. Sometimes cats sneeze a lot because they get dental abscesses which can irritate the sinuses.

Thomas: Good luck, Sharon. We hope you and your vet can help your sneezy girl be less sneezy.

Siouxsie: And just to close this off on an amusing and cute note, here’s a video compilation of sneezing cats: