My Cat Has Too Many Claws. Help!

My neutered female cat is a polydactal (Hemingway) cat. She is an indoor cat. Because of the nature of the structure of her additional toes, it is very difficult for me to trim the extra claws. I take her to the vet to have this done for me. I can tell when they need trimming because she loses her enthusiasm for play. At one visit, my vet advised me that I should have these extra claws removed (for almost $400) and that it would be better for the cat. I am in a quandry because of the painful procedure involved. Should I have this surgery done or just continue to have her claws trimmed? 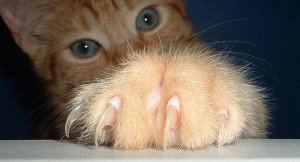 Photo by AnasiZ, released into the public domain.

Siouxsie: Suzanne, you’re not the only one who’s found yourself in a quandary when faced with a decision like this.

Thomas: We all know that declawing is a painful procedure that can cause permanent changes in your cat’s behavior and even sometimes their health.

Kissy: But sometimes there’s a legitimate reason to do what vets call a partial declaw, and here’s the story of one case Mama know about. I’m going to let Siouxsie and Thomas tell the story because they were there when it happened.

Siouxsie: One of Mama’s friends was faced with a similar problem. She adopted a sweet little super-polydactyl kitten — literally, the cat had eight toes on one of her front feet. She had a hard time trimming her cat’s claws, too, and sometimes they grew right back into her paw pads a a result.

Thomas: Her vet, who is on the record as being passionately against declawing to the point of refusing to do “convenience declaw” surgeries, recommended that the cat have a partial declawing.

Siouxsie:  The cat’s extra claws didn’t bear weight, so it wouldn’t be as painful as a typical declawing, and in the long run it would be better for the cat’s health.

Thomas: Mama’s friend did a lot of soul searching, too. She knew what declawing involves — an amputation of the last digit of each toe — and hated the very idea of it.

Siouxsie: She talked with a lot of her friends as she processed the idea, and finally when little Dazzle had yet another claw wrapped up into her paw pad, she decided a partial declaw really would be in the best interests of her cat.

Thomas: And when the vet did the surgery, she found a whole bunch of other little claws that were actually inside the paw pads — the bones had never fully grown out, but the claws were still in there.

Thomas: In this case, the partial declaw was necessary for the cat’s health and quality of life. She made a quick recovery and had no complications from the surgery.

Kissy: So, Suzanne, there are times when it’s legitimate to do that partial declaw.

Siouxsie: We’d recommend that you have a serious talk with your vet. Express your concerns about pain and other issues with declawing. Ask your vet what he or she would do if the cat was their pet.

Thomas: If you want to keep your cat’s extra claws, you’ll need to learn how to trim them. It’s going to get expensive if you need to take her to the vet every few weeks to have those odd claws clipped. We figure it’ll add up to a lot more than $400 over the course of your cat’s life.

Kissy: Mama’s known six- and seven-toed cats who didn’t have a problem with their extra claws, but like Mama’s friend’s cat, some polydactyl cats do run into extra problems with too many claws.

Siouxsie: Ask your vet all the questions you need to ask — including if he or she has seen other cases like this where a partial declaw was done. Maybe you can find other people who have had partial declawing procedures done on their polydactyl cats and talk to them about how it turned out.

Thomas:  Ultimately it’s going to be your decision. But we want to reassure you that in some cases, declawing is medically and ethically okay, if you’re doing the procedure to maintain your cat’s quality of life rather than protecting your furniture.