My Cat Got Out, and Now He’s Peeing Everywhere

My cat is about 2 years old and recently got outside for a couple of hours (he’s an indoor cat). We found him under the neighbor’s house — there are always other cats going under there, and he sits at the window and watches them. He’s fixed, but a couple of days after we brought him back in the house, he started mating with everything. I know this is common because I have another male cat that does it all the time. But then, about a week later I saw him squatting on the floor and peeing — but not like what he would normally, just small short squirts. I rushed to put a towel under him, but I’m catching him doing it everywhere and now im finding pee spots all over the house. Please help me! 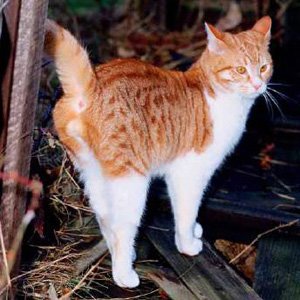 Cats typically mark their territory by spraying, as this cat is doing. Even neutered males and female cats can spray when they're stressed about territory. But cats can also mark territory by urinating or defecating. Photo courtesy of purrfectcatbehavior.com

Siouxsie: Well, Rachelle, before you try any behavior solutions, it’s really important that you take your cat to the vet and have him checked out. Sometimes cats pee inappropriately when they have urinary tract infections or crystals in their bladder. If your cat gets a clean bill of healthy, we’d lay good odds that your cat is suffering from territorial stress.

Thomas: When he got outside, he found that all those other cats hanging out by your neighbor’s house are real and that their territory is very close to his. He may even have gotten in a fight with one of them.

Dahlia: Stressed cats often urinate to mark territory and help themselves feel secure in the knowledge that this is their place.

Siouxsie: The good news is that there are things you can do to help your cat feel less anxious.

Thomas: We’d recommend that you start by covering up the windows where your cat looks out to see the other cats in and around his yard. You can do this by putting cardboard in the bottom halves of the windows and moving furniture away from places that make it easy for him to look outside.

Dahlia: It’s not pretty, but you won’t have to do this forever — just until he settles down and stops peeing in the house.

Siouxsie: Next, you’re going to have to find all the pee spots and clean them up with an enzymatic cleaner. We recommend a product called Anti-Icky-Poo. Yes, the name sounds silly, but it really does work better than anything else we’ve found.

Thomas: You can find the urine stains by using a black light, which will cause the spots to glow. Use the enzymatic cleaner according to the directions, and even the faintest odors will disappear.

Dahlia: Whatever you do, don’t use ammonia-based products to clean up cat urine. It only makes the smell stronger.

Siouxsie: You can also try putting some deterrents on the area where your cat likes to pee. Plastic carpet runners placed upside down are uncomfortable but won’t cause injury.

Thomas: Then you’re going to have to de-stress your cat. We’ve successfully used a product called Feliway to solve territorial spraying and peeing problems. Feliway is a product made of synthetic “happy cat” pheromones, and it’s well-enough proven that many veterinarians use it in their cat exam rooms.

Dahlia: We recommend you purchase a diffuser and plug it in where your cat likes to hang out, and a bottle of the spray. Spray the Feliway by the windows and the places where he’s peed. But don’t spray it near his litter box.

Siouxsie: Feliway is available at pet stores, online, and at some veterinarians’ offices.

Thomas: As an extra added bonus, Feliway can also help cats cope with other stressors like moving house, going to the vet, or illnesses of animal friends and the important people in their lives.