My Cat Was Shaken! How Can We Restore Her Trust? 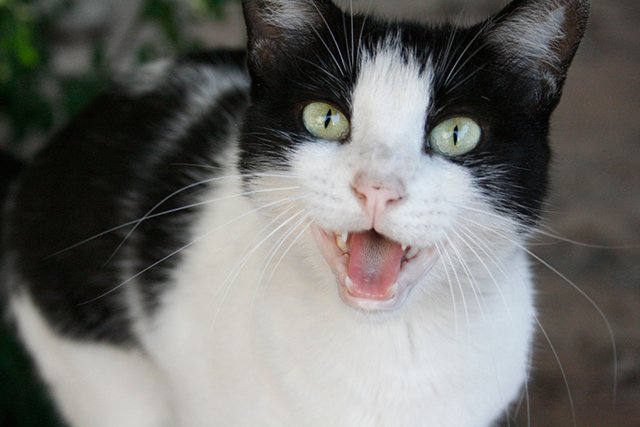 I have a cat that’s about 10 months old. He comes in and out most of the day, but at night it’s extremely annoying . His meow is VEERY high pitched. He climbs onto the roof and meows at my window and rubs the glass and it wakes me up from even a deep sleep asap, then he goes downstairs runs to get food then meows in the kitchen to go out the door and one of us need to get up. This happens from 3-5 a.m. continuously. When you follow him downstairs all he wants is you to watch him eat. Today at 6:30 he went into my mom’s room and woke her by meowing onto of her and she woke up brought him down and then let him out. She doesn’t sleep most nights from arthritis so this morning when he came back to her after already annoying her, she told me she grabbed him and shook him and shouted, he stopped purring and jumped to the ground hard and hid under the table. She felt bad straight away cause she knew she shouldn’t have done it to him. Then he ran up to her room and hid under her bed and wouldn’t come out. Later he came back to my room through my window and slept at the end of my bed and then my mom came in and petted him and told me what she did to him. He let her pet him then but now he keeps running from her and just now he was on my lap purring and I picked him up and carried him downstairs to see if he’ll still purr if it’s my mom petting him and the second she touched him he stopped. What can fix this?

Thomas: Well, Aisatsana, it sounds like you’ve got two related problems here. First is your cat’s midnight meowing, which is what caused your mother to shake him.

Bella: You’re right in assuming that it’s going to take time for your cat to rebuild trust in your mother. It’s pretty scary for a cat to get shaken and shouted at, and it’ll be a while before he really trusts your mother again. All she can do is be as gentle with him as possible and give him space to get used to her as a friendly presence again.

Tara: She can’t force the issue by picking him up and putting him on her lap or such things. He’s got to come back to her on his own terms.

Thomas: But the behavior that caused your mother to get annoyed enough to shake your cat and yell at him also needs to be resolved, for all of your sake!

Bella: We know it can be terribly annoying for a cat to cry at your window at 3 o’clock in the morning and demanding that you follow him downstairs to watch him eat. But the thing is, by paying attention to him and doing what he wants, you’ve unwittingly reinforced that behavior.

Tara: By that, we mean that your cat has figured out that if he meows and carries on, he’s going to get attention, which is what he wants.

Thomas: The only way to reverse this midnight meowing is going to take patience — and maybe even earplugs!

Bella: You and your mom are going to have to ignore him when he carries on in the middle of the night.

Tara: Yes, we know this is going to be a real challenge, but we do have some ideas for you.

Thomas: First of all, you’re going to have to stop letting him go out at night. In fact, if you have a room where you can close the door and leave him there for the night, that’s going to help a lot.

Bella: What you need to do is leave him in that room, with a bed, a bowl of food, water, toys and a litter box so he has everything he needs, and whatever you do, don’t let him out until you and your mother are ready to get up in the morning.

Thomas: You have to do this every single night, without fail, for as long as it takes for him to stop meowing in the wee hours of the morning.

Bella: If you cave in even once and let him out, he’s going to remember and you’ll have to start the process all over again.

Tara: You can put a radio in there, playing quiet and relaxing music at a low volume, to ease any anxiety your cat might have about being alone.

Thomas: We’d also recommend a really good play session just before you’re about to go to bed. Get or make a “thing on a string” toy and play with him until he’s panting. Once he gets to that stage, make sure he gets a little bit of food, and put him in his room.

Bella: Even if you don’t have an extra room, this long round of play and a little food at the end of the play session will engage his natural behavior and he’ll wash himself and go to sleep.

Tara: But again, whatever you do, do not pay attention to him when he starts meowing and carrying on! You might even want to buy some ear plugs so that you and your mother don’t hear his meowing loudly enough to wake you up.

Thomas: You should be able to find appropriate ear plugs (the moldable silicone kind) at a pharmacy or building supply/hardware store. They’re comfortable to wear, and they’re sold as hearing-protection ear plugs for working with loud tools.

Bella: By keeping your cat indoors at night, playing with him and using the classic behavior trick of “hunt, catch, kill, sleep,” and using ear plugs so you don’t hear him meowing, you should be able reduce the midnight chorus behavior.

Tara: But it will take time, so be very patient as well. Best of luck to you and your mom!

Thomas: What about the rest of you readers? Have you had to deal with midnight meowing? How did you get your cat to stop, and how long did it take? Please share your experiences in the comments.