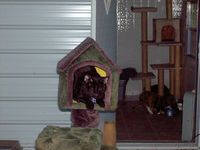 Alchemy is one of the cats at Blind Cat Rescue & Sanctuary in St. Pauls, North Carolina. He was born with micropthalmia (underdeveloped eyes) and was dumped at a shelter when he was only 8 weeks old. He was adopted by someone who kept him in a 3×3-foot cage in a filthy home for the first five months of his life.

After he was rescued, he adapted well to his new life in a clean home, but at about 1 year of age, he began having recurring infections in his eyes. The rescuer’s vet removed his eyes — which weren’t working anyway —  and he recovered beautifully.

But shortly after surgery, Alchemy began having seizures, possibly due to the anesthesia used during the procedure. After a short course of treatment with Valium, he was weaned off the drug hasn’t had a seizure in more than two years.

Alchemy gets along really well with other cats, and after he gets over his shyness, he falls in love with people too. Because of his blindness, he does get scared if you touch him without letting you know you’re there. But if you tell him “Hi,” he arches so high on his tiptoes to get petted that he’s actually fallen over.

Cats like Alchemy are why we’re raising money for Blind Cat Rescue & Sanctuary in St. Pauls, North Carolina. BCR is a home of last resort for a lot of the cats in their care, most of whom were in high-kill shelters and would have been put down right away if it hadn’t been for Blind Cat Rescue and the people looking out for these special kitties. Please help us reach our incredibly (or maybe ridiculously) ambitious goal of raising $5,000, six months of care for all the kitties at BCR. Just click on the widget at the right to donate, or visit the Paws and Effect Be The Change Challenge page at FirstGiving.