My Kitten Hates Water. What Can I Do About That? 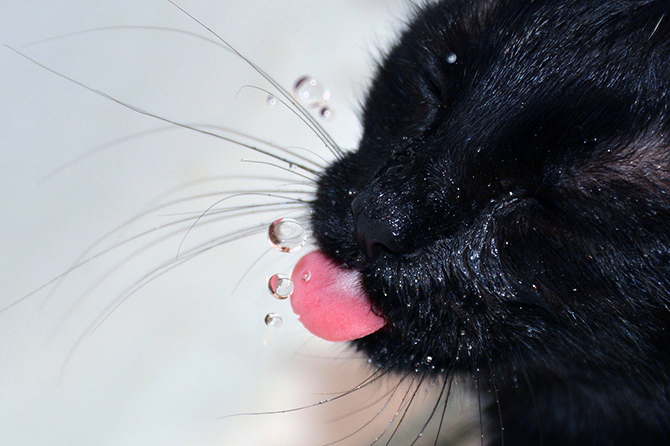 Most cats don’t care for water, but when there’s trauma involved, that fear cat get really serious. Photo via Pixabay

My kitten hates water. If I dip a finger in water and rub it in her fur, she’s all right, but I tried dipping her feet in room-temperature water without the tap running and she started freaking out like I was trying to drown her. I know for a fact I wasn’t hurting her in any way. It stems from a shower I gave her during her second week here; I wasn’t sure about the right protocol about introducing a kitten to water and she freaked out. I wanted to introduce her slowly but I got pressured by my roommates to just ‘toss her in’. Also, her first bath didn’t go so bad at all and it was done the same way. I Ieft the tap running, and by the time she had flown out panicking, she had dug her claws in my back and head trying to get out. She was already soaped up so I had to wash her, which didn’t help her mental state, I’m sure. Now, she won’t even drink from the water bowl I have by her wet food. I just need some kind of method to help her get past this. I cried for a solid hour after her bath because I felt so terrible.

Thomas: Well, you’re in a bit of a pickle there, Zermeena. But we think your kitten will be all right.

Bella: First of all, let’s talk about cats and their relationship with water. In the wild, most cats don’t bathe in water, and very rarely do domestic cats need a bath at all. In fact, the only time Mama’s ever bathed a cat was when he came in covered with oil and grease from walking around under cars.

Tara: And cats have a very low “thirst drive,” too. That’s because they’re designed to get the water they need from eating their prey. Since your kitten eats canned food, which has a high moisture content, it wouldn’t be surprising that she wouldn’t drink out of her bowl very much.

Thomas: That said, we wouldn’t worry too much if you don’t see your kitten drinking out of her bowl, as long as she’s eating a proper ration of canned food.

Bella: Also, you shouldn’t need to give your kitten baths unless she gets herself messy (if she’s a longhaired cat who gets poop on her back-end fur, for example) or gets out and comes back sprayed by a skunk or covered in grease.

Tara: It’s not surprising that your kitten was traumatized by being tossed in the water–and it’s too bad that your roommates pressured you into doing that.

Thomas: The best thing you can do is give her time. Don’t force her to get in the water. If you need to clean her off, we recommend using wipes designed to take care of surface dirt and dust.

Bella: When Siouxsie got old and creaky enough that she was having trouble cleaning herself, Mama used Earthbath Hypo-Allergenic Grooming Wipes for cats.

Tara: If you’re concerned that your kitten is getting dehydrated, add a couple of teaspoons of water to her canned food to make a gravy. It’ll be flavorful enough that she’ll drink while she eats her meals.

Thomas: And most cats freak out about mass quantities of water. Our sweet Dahlia panicked when she was locked in the bathroom with Mama while she was taking a shower. And Mama didn’t even try to get her in the water, either!

Bella: It may take a very long time before your kitten wants to get near the bathtub again. Possibly even years.

Tara: But like we said, you can keep her clean and hydrated without giving her baths in water.

Thomas: Do you other readers ever bathe your cats? Do you have some tips for Zermeena if she wants to get her cat used to baths? Please share your advice in the comments!