Is It Really That Important to Get My Cat Neutered?

Our cat, Guy, is nearly a year old now. We found him when he was a kitten, 2-3 weeks old, in the lagoon area in southeast Nigeria. I had to feed him with a dropper and massage his belly; he was to young to do number one on his own.

Anyway, he’s a big boy now, leaving with us in Lagos, Nigeria. He stays only indoors but has plenty of place to roam around. We are not planning to have him go outside unless he really wants to, because it’s not very safe. He is actually a bit intimidated by the outside world, maybe because he grew up indoors.

Guy has now reached an age where he wants to find a girlfriend. He is not spraying the house or making strange noises, etc., but he is trying to hump the dirty clothes! He carries them around and humps them. It started with socks but he has now moved on the the sofa pillows! It’s disgusting! But we love him and we can manage all that.

My question is, is it bad for a male cat that is not castrated not to have regular sex?

We don’t want to castrate him — he won’t produce unwanted kittens or get into fights or anything like that, and apart from the pillow humping, he is not marking or spraying.

We will breed him one day, but till then Guy is not emptying the sacks. The vet convinced me he is in discomfort and I booked an appointment for this weekend to do the operation, but I really need a second opinion if it is that needed.

Thanks guys, I’m awaiting your reply with anticipation! 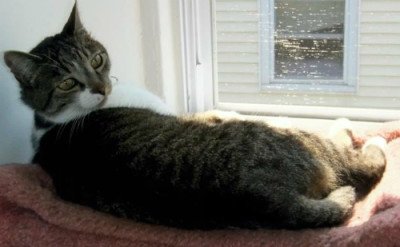 Thomas says he’s happy that he’s neutered. He’s not running around chasing the ladies, and he can love his harem just because they’re awesome rather than because he needs to mate.

Siouxsie: Eliza, thank you for asking this question. We always recommend that cats get neutered or spayed, and there are a bunch of reasons why.

Thomas: First of all, there are already so many unwanted kittens abandoned to fend for themselves, that it would be really unfair to contribute to the problem by not having your cat fixed.

Bella: Not only that, but spaying and neutering drastically reduce the chance that a cat will come to a violent end while seeking a mate.

Siouxsie: Best of all, it will reduce or eliminate unwanted behaviors like urine spraying or, in Guy’s case, humping laundry and pillows.

Thomas: Neutered male cats are less aggressive than intact tomcats, too. I mean, yes, I’m a mancat, and I can defend my territory and all, but I’m just not as crazy-aggressive as some of my un-neutered friends.

Bella: He’s a lover, not a fighter! *purrrrrrrrrrrrr*

Thomas: Anyway, because we neutered boys fight less, we’re at much less risk of contracting diseases like feline immunodeficiency virus, which is spread through deep bite wounds like the kind we get (and give) when we’re fighting with other male cats.

Bella: Neutering can prevent testicular cancer, too. Trust us, it’s really sad to watch a cat die from cancer.

Siouxsie: If you have Guy neutered, he’ll probably become much more of a “family cat” — he’ll be more cuddly and relaxed.

Thomas: It’s an economic thing, too. It costs a lot more to care for a mom and a litter of kittens than it does to have your dude neutered. Sure, your cat won’t be the one getting pregnant, but somebody’s cat will be. Who knows if they’ll be able to afford to do the right thing and get mom-cat and her kittens fixed?

Bella: And if mom-cat is an alley cat, her kittens will continue to contribute to cat overpopulation.

Siouxsie: In other words, neutering is a win-win-win — for humans, for your cat and for felinekind as a whole.

Thomas: We’re not going to lie, though: there is some risk. Neutering is surgery and it’s done under general anesthesia. All surgeries pose risks, whether from complications like bleeding or a bad reaction to the anesthesia.

Bella: But the risk of a bad reaction is so tiny that the benefits of neutering far outweigh the risks. Please get your Guy neutered. Thanks!