Six days ago I returned home with a new feline housemate, and I promised to document the process of introducing Chrysanthemum — a.k.a. Chrysanthemum Kiss-Kiss Bobette Jellylorum Kelley — into my family.

Because I knew Kiss-Kiss would be stressed from the five-hour road trip and finding herself in a new environment, I knew it was important to take it slowly. I really wanted this introduction to go right because I really, really want her to get along with my other cats and find her forever home with me. 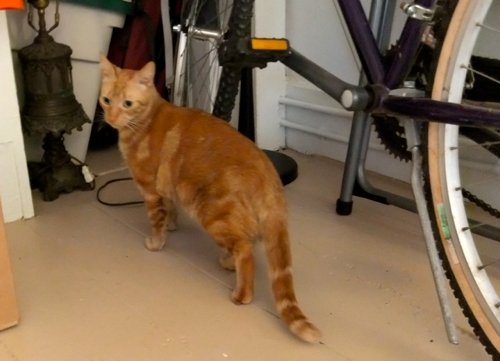 The first thing I did was to give her a room of her own where she could decompress and get accustomed to the new smells and sights. I parked her in my office (after I moved my computer out into the living room) and gave her a makeshift bed of a pillow and some towels in a cardboard box. I also installed my Catty Stacks in there because Siouxsie and Thomas hadn’t claimed them yet and they’d give her a place to hide and a place to look out the window. She also got her own litterbox and food and water dishes.

For the first couple of days Chrysanthemum was very tense. When I went in to feed her and give her some attention, she was hiding behind a desk and cautiously worked her way out to allow me to pet her. When she did come out to sniff around and rub her face on things to mark her territory, she was very careful to walk around the edges of the room — another sign of a cat that needs a confidence boost. She also didn’t eat much. Those are signs of stress, so the most important thing was to find a way to minimize that stress.

But as you can see in this video, which I took on Wednesday, she came right out of her shell every time I walked into the room.

I discovered, sort of by accident, that the primary reason she wasn’t eating much was that she didn’t like where I’d placed her bowl. Maybe she felt too vulnerable to relax enough to eat, I don’t know. But when I moved that bowl so her head was facing the door when she ate and she had a clear view all around her, her appetite picked right up.

On the third day, she was inside one of the Catty Stacks, so I knew she was getting less fearful. She was still on guard, but she wasn’t hiding where nobody could see her. 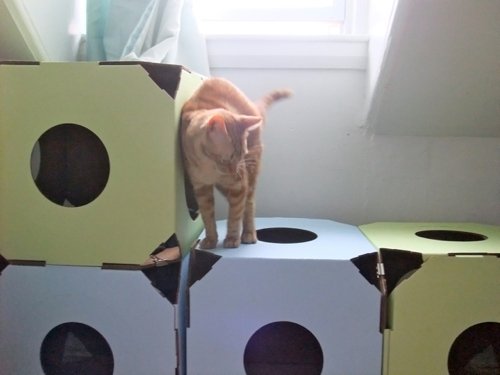 Day 3, Wednesday, I heard a wonderful sound: pitter-pattering footsteps and hops and jumps. She was playing with the mouse toy that Robin had left in her carrier. When a cat starts playing, that’s a very good sign. That evening, I opened the door a crack so that Thomas and Chrysanthemum could have a very brief introduction. Noses poked at the door and both parties did some hissing. 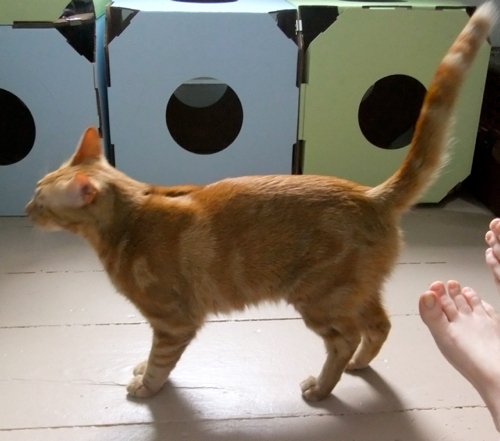 Today: Notice the difference in Chrysanthemum's body language from Day 2. She's walking tall with her tail up, in the center of the room.

Later on, I made a point of reassuring Thomas that Chrysanthemum was not here to replace Dahlia. Nobody could replace  Dahlia, I told him, and I still miss her terribly as I’m sure he does, too. “Dahlia will always have a place in my heart, and I know she’ll always have a place in yours,” I said, “and the wonderful thing about cat-loving humans is that there’s infinite room in our hearts, and when we bring a new family member home, our heart expands to fit the love of the new cat in with all the others.”

That may sound silly to some of you, but the next day when I let them see each other again, Thomas was very polite. I petted them both as they met each other, which I hoped would begin to create a positive association. Although Thomas’s tail was lashing a little bit, he didn’t make a sound. Chrysanthemum got a foot or so away from the door and hissed and ran off, but then she came back around and explored again. When she hissed, I stopped petting her — I didn’t want to reinforce that behavior — and continued to reassure each of them that it’s OK and they’re safe. 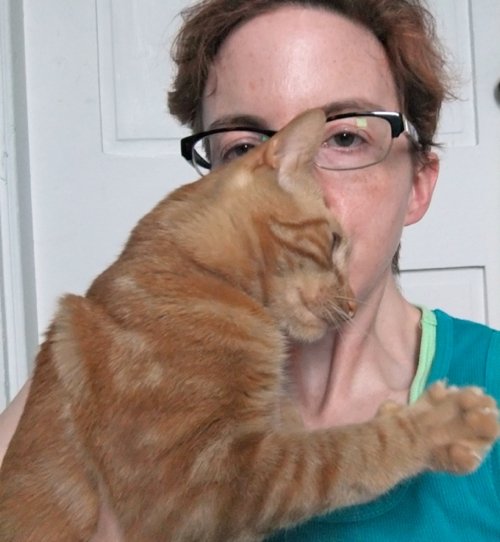 Kiss-Kiss and me, this morning. Yes, I look like a grubber, but it was early in the day.

Last night, I got a little bit bolder and left the door open enough that Thomas could get his head and shoulders into the room. He was much more mellow; there was a lot less tail lashing. And as for Kiss-Kiss, she was relaxed enough that she actually rolled over on her back and let me pet her while Thomas was head-and-shoulders in the room. Of course, there was some growling and hissing, and again, I reinforced the good behavior — when both of them were purring and acting relaxed — and stopped petting when I heard aggressive noises. 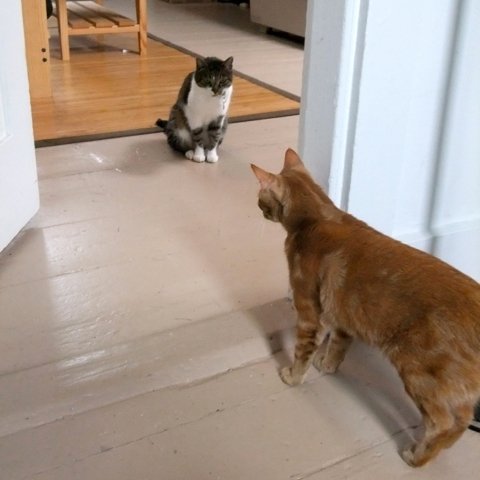 This morning: The door is wide open and Thomas and Chrysanthemum look at each other. Thomas is sitting calmly while Kiss-Kiss looks out, curious.

Each day the open-door duration has gotten longer. Last night I went in later in the evening and left the door open and didn’t stand by it to guard against the cats going in and out. Thomas came inside and explored around her room while Chrysanthemum sat on top of the Catty Stacks, ever watchful. When he got too close, she made a low growl and I said, “It’s okay, you’re safe.” After about 15 minutes, I closed the door  with Thomas outside. Chrysanthemum immediately went around the room and sniffed everything Thomas had touched. 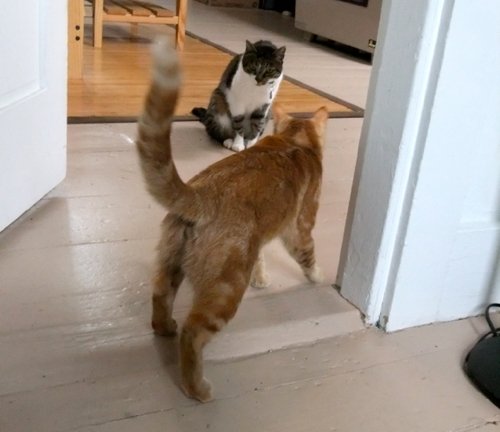 And ... Chrysanthemum sets foot across the threshold for the first time since she's been here. Don't be fooled: there were fat tails and growls and hisses shortly after I took this photo, so I shut the door again and let them chill out.

Which leads up to today. Twenty minutes of wide-open-door time with Thomas and Chrysanthemum doing the kitty intro dance. Chrysanthemum set her foot outside the door of her room for the first time! Of course, that led to fat tails and growls from both parties, so I closed the door and let them cool off.

So … Chrysanthemum and Thomas are making good progress in their introductions. I am a little concerned about Siouxsie, though: she’s shown no interest in getting anywhere near her, although the two ladies have met — with mutual growls and running in opposite directions. Whether this means Siouxsie’s cooler because at age 16 she’s seen it all, or whether it means something else, is still up in the air.

As cat behaviorist and America’s favorite cat daddy, Jackson Galaxy, said to me in a recent interview, there is no Grand Unifying Theory about cat introductions and cat behavior. Every cat is an individual, and while there are certain steps to take in order to make a proper introduction, the timing of those steps is all about the cats themselves. Watch their body language very carefully and be sure to positively reinforce the behavior you want. Cats do growl and hiss at each other; that’s a normal part of introductions. But don’t let the conflict escalate to the point where either party is traumatized, or else you’ll have to go back to step 1 and re-introduce them.