How Should I Introduce a Shy Cat? 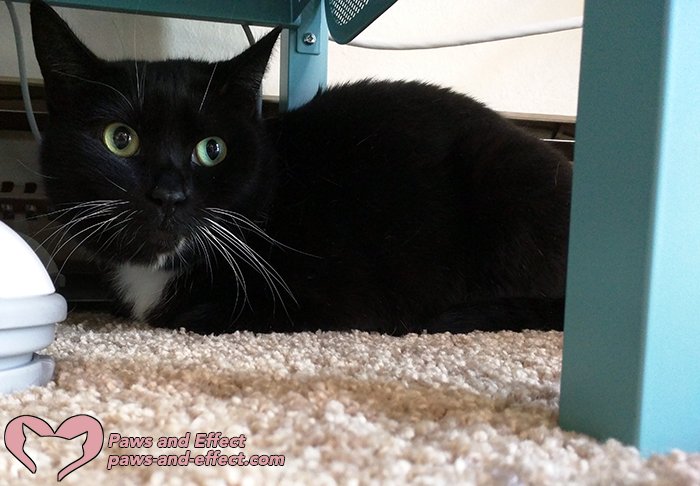 Tara was a very shy cat when she first came to Paws and Effect HQ.

Hi! I have been asked if I would take in a third cat who will be in need of a home. She is a shy cat, about 4 years old, and has been living with an elderly lady for a year or so. I have a 14-year-old grey tabby who does not like other cats and is inclined to be grumpy with occasional hissing and growling but can also be very loving, and a 9-year-old sweet-tempered male tuxedo cat who is a mischievous but lovable goofball. I introduced him successfully when he was six months old. It took a while but she came to accept him. They were all shelter cats at one time or another. I hesitate to put a timid cat into the mix for her sake. However, she will probably go to a shelter if I do not take her in. Advice?

Thomas: Well, Suzanne, you asked just the right kitties! You see, when Tara first moved in with us, she was a very shy cat, too.

Bella: When she first got here, she hid under the couch, or under the bed, or in the closet all the time! But with time and patience, Tara became a full-fledged member of the Paws and Effect Gang.

Tara: It’s true, I was really scared when I first got here. I’d been wandering the mean streets of North Seattle for a couple of weeks, and it was cold and rainy and windy, and I didn’t know what had happened to my humans or why I couldn’t get into my house anymore… *sniffle*

Thomas: There, there, Tara, it’s all right. You never have to worry about that ever again. Here, let me lick your tears away.

Tara: Anyway, Suzanne, the key to introducing a shy cat into your family is to give the shy cat a safe space and to be patient.

Thomas: Ideally, you’ll prepare your other cats for a new arrival before they move in. Mama didn’t have time to prepare us ahead of time because Tara’s situation was very urgent–she could not spend a single night more out on the streets! Even so, she did the best she could.

Bella: If you have the chance to visit the cat you’re considering adopting, bring a couple of clean cotton socks with you. When you pet the cat, rub the socks along that cat’s cheeks and the places in front of the ears where the fur is thin. By doing this, you’ll get the new cat’s scent on the socks.

Tara: Then, when you get home, take the socks you’ve rubbed on the other cat and show them to your cats. Leave them on the floor in a common area so they can smell the new cat. Tell your cats that they’re going to be getting a new friend, but you won’t love them any less because of it.

Thomas: The next step is to prepare a room for the new cat. You’ll want to make sure she has a litter box, her own food and water dishes, and some toys and a bed or two to keep her comfortable.

Bella: Ask the current owner what litter and cat food she currently uses and make sure you have these products in your home when it’s time to take her in. You can always switch her over to your preferred food and litter brands once she’s feeling safe and secure in your home.

Tara: Ideally the room you set up for the new cat won’t be a high-value space for your current cats. For example, here at Paws and Effect HQ, the bedroom is a really high-value space because we all sleep in the bed with Mama. But when Mama took me in, she couldn’t put me anywhere except the bedroom (she only has a one-bedroom apartment), which caused a bit of a ruckus with Thomas and Bella.

Thomas: To be fair to Mama, though, she did sleep on the couch the night she brought Tara home so that Bella and I could sleep with her.

Bella: When you have a shy cat, it’s really important to boost her confidence. You can do that by spending time with her in the safe room–just grab your phone or your laptop and play around on social media for a while, or read a book, or whatever helps you to pass the time. Let the shy cat approach you on her own time. Talk to her quietly and tell her you love her and you’re glad she’s here. Plan to spend at least half an hour, at least twice a day, with her. More is much, much better, though!

Tara: Another good way to build a cat’s confidence is by playing with them. A fishing pole toy is a perfect tool for this because you don’t have to get too close to her before she’s ready.

Thomas: When you play with a fishing pole toy, don’t just fling it around–make it move like our prey would. Maybe a little mouse peeks out from behind the furniture, runs a few paces, stops and looks around, and then runs for cover! Or that little bird hops around picking up seeds and stones, then it sees the cat and flies away! Ooh, just thinking about that is getting my tail twitching.

Bella: One thing you don’t want to do when preparing a shy cat to become a member of your family is neglect your resident cats. They need to know you still love them, too, so make sure you spend plenty of time playing and hanging out with them, too.

Tara: Hopefully you’ll only need the safe room for a week or so, but that depends largely on the cats themselves. You’ll probably find that your resident cats are sniffing under the door of the safe room, trying to figure out who’s in there. If they do so without a lot of fuss and bother, after a few days try leaving the safe room door open for about half an hour.

Thomas: You must pay attention during this time, though, because if the resident cats barge in and fight with the shy cat, it’ll set things back a bit. You’ll need to stay on top of things and watch for any potentially hostile behavior because you’ll want to stop the hostility before it starts.

Bella: If the half-hour of open door time goes off without a hitch, you’re headed in the right direction. Keep doing this for a few more days, leaving the door open a little bit longer each time–45 minutes, then an hour, and so on.

Thomas: That said, it may require more than a week. It was at least six months before Tara started spending any amount of time in the living room with the rest of us (without hiding under the couch, that is). It’s really important for you to determine before making the commitment to adopt this shy cat whether you can manage the introduction even if it takes a long time.

Bella: You’ll also need to monitor the new cat’s eating, drinking, peeing and pooping to make sure her input and output are healthy. In addition to being timid, this new cat will have just had her whole world upended, and we cats aren’t big fans of change. So be patient and kind with her as she adapts to her new life in your home.

Tara: Don’t be surprised if she and your resident cats don’t become best friends. Cats are like people: sometimes you can put two or three of us together and we get along just fine, but other times, there’s just a vibe that doesn’t quite click.

Thomas: What about you other readers? Have you introduced a shy cat into your home? How did you go about doing it? Is there anything you wish you’d done differently? Let us know in the comments!