Is My Cat Peeing On The Bed Because She’s P*ssed Off? 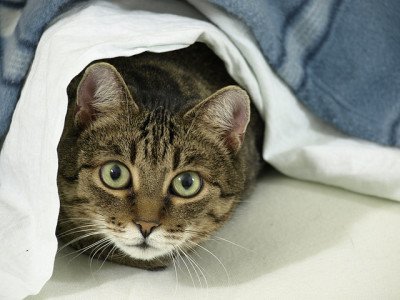 I’m desperate for some help. We have two 5-year-old cats and we adopted a new kitten, Maycie, in October. We slowly introduced the kitten and things were going fine. Around the end of November, one of the older cats, Rayah, began to “go after” Maycie pretty aggressively. Maycie began to urinate on chairs, couches, beds, and clothing. We took her to the vet and discovered she had a urinary infection and Giardia. So we isolated her to the bathroom. After a week of consistently using the litter box, we moved her to the spare bedroom. Her diarrhea began to clear up about a week ago, so we had a fecal test run again and her results came back negative for everything. The vet said we could slowly re-introduce her to Penny, the other 5-year-old. So yesterday she was out and about for 45 minutes. She played with an interactive toy while Penny watched and occasionally joined in or hissed from a distance. After 45 minutes, we put Maycie back in the spare bedroom. Today when I got home from work, I was going to feed everyone then let Maycie out again for a little while. When I went into her room, I noticed she had urinated on the bed a few times, so now she is back in the bathroom – with me sitting here typing this to you. I have NO idea what to do now! Is it possible she is ‘mad’ about being in the room alone? Will she have to be in a household with no other cats? We lover her tremendously, but can’t deal with this urination problem much longer. ~ Mimi

Siouxsie: Oh, Mimi, we feel for you! Inappropriate urination is one of the most stressful issues any cat caretaker can have.

Thomas: A lot of people misinterpret inappropriate urination, especially on beds or clothing, as an act of revenge or a way to express anger, but actually that’s the last thing it means.

Bella: The cause of the vast majority of behaviorally related inappropriate peeing is stress — specifically, territorial stress.

Siouxsie: Considering that Maycie is being regularly attacked by one of your other cats and the vet has given the poor little thing a clean bill of health, this is especially likely to be the problem. She’s probably so scared and insecure the only way she knows how to feel safe is to pee in “her” space.

Thomas: So what do you do about this? What it boils down to is helping Maycie to feel that your home is also her home and building her confidence. 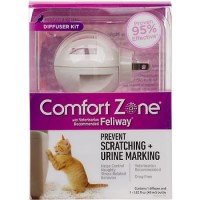 Bella: Step 1 is to get some Feliway Comfort Zone plugins and use them in her room and in the room where you and the other cats hang out the most. You can get them at any pet store or online retailer, and many veterinarians’ offices carry them as well.

Thomas: Hey, don’t laugh: this stuff works! When Mama first brought me home from the shelter, she used these plugins and they made me feel better, and our vet uses Feliway in the exam rooms.

Siouxsie: The next step is to clean up all the urine remnants. Even if a surface looks clean, there are proteins in urine that stick around for a long time. Mama uses Fizzion to clean up pee smells and barf stains, and it works fabulously when used as directed!

Thomas: After you’ve cleaned everything, you’re going to start with scent swapping. Do this by putting the older cats in the spare bedroom while letting Maycie roam around the rest of the house. Coax her onto sofas, cat trees and other furniture by using an interactive toy. Give her a good 45-minute session of exploration each day.

Bella: By getting her up high, you’ll help her mark the rest of the house and the higher she goes, the more confident she’ll feel.

Siouxsie: And the more she plays in the space, without the other cats looking on, the more comfortable she’ll feel.

Bella: You’ll also want to make sure there are no place where Maycie can get cornered by the other two cats, so establish plenty of “cat highways” so the three cats can coexist without meeting one another by surprise, and that if Maycie needs an escape route, she can have one. 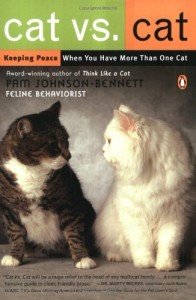 Siouxsie: Cat behaviorist Pam Johnson-Bennett, Mama’s first behavior mentor and writer of several awesome cat books, has a whole section on her website about how to deal with intercat issues like aggression, litter box aversion, and creating a “group scent.” We suggest checking out her posts for step-by-step instructions on how to help fighting and insecure cats.

Thomas: If you can eliminate resource competition, clean the urine, raise Maycie’s confidence, deal with the other cats’ resource guarding behavior, and create a group scent, we believe all three will at least be tolerating each other eventually.

Siouxsie: Except when you chase me, Bella. I don’t like that and I wish you’d stop.

Siouxsie: I know, honey. It’s just that I’m so tired and it hurts me …

Thomas: How about you readers? What have you done to help a territorially insecure cat feel comfortable in her home? How have you dealt with inappropriate urination? Please share your thoughts in the comments.