My Cat Is Peeing All Over the Place. Help! 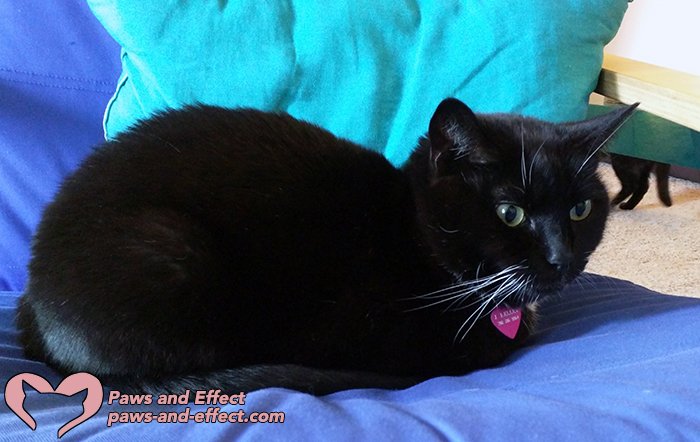 We know a thing or two about inappropriate urination and the frustration it causes.

I got Rocket and Groot from a shelter two years ago as birthday gifts from my uncle. They were both feral kittens at the time, and are basically sisters. They have been together their whole lives, but they have completely different personalities. Groot is an angel. She hardly meows, likes her space but will come to you for snuggles, doesn’t really get near her sister unless they are eating together or to play from time to time. Rocket, however, meows every two seconds at all hours of the day and night, bullies her sister out of attention even when she is given plenty, scratches at my bedroom door late at night, is always in Groot’s face to the point it seems Groot gets annoyed. Oh, and let’s not forget my “favorite” part, she pees EVERYWHERE. My couch, my floor, my carpet, my clothes, my shoes, and now in her and her sister’s beds. I have had to throw out two rugs, a good amount of clothes, several pairs of shoes, etc. My house is beginning to smell like ammonia. It’s a lot and it’s been going on for a year and a half. Over the course of that time, I got her a Feliway plug-in, hoping that it would stop her from peeing on my things but she continues to do it. I’ve taken her to the vet twice. The first time I was told that it was a UTI. I was given (rather expensive) oral meds to give her and for the time she took them she was fine. As soon as she ran out, it started again, but this time with blood. I took her back and they said that it was stress-related. I can’t think of anything stressful to her other than the fact that I cannot be home all day. There’s nothing I can do about that. I’ve already changed my shift, and I even leave the living room television on for them in the morning so they are not left alone in silence. However, my fiancé works from home and is pretty much always there with them when I am not. He has not bonded with Rocket as well as he has with Groot, due to the fact that Rocket pees all day all over the house and he is constantly cleaning it up. He is frustrated with her, and I am beginning to get frustrated as well. I don’t know what to do. That’s my first problem. My second problem is, I love them both with all my heart and I do not want to give them up. But with Rocket peeing all over my apartment, I cannot continue to let her damage the property of a place that is not truly mine. I also do not want to punish Groot for something she didn’t do. My uncle is willing to take Rocket. However, I am worried about separating them. I do not want either to become depressed. I also do not want to give up on them without putting in some sort of effort to help her out of the habit but she has already caused the wood to stain in two areas of the apartment and I can’t just continue to let her put all of our living situations in jeopardy. Then none of us will have anywhere to go and she’ll REALLY be stressed out. Please, help. Any advice is better than none.

Thomas: Well, D.C., you are in a difficult position. We commend you for putting up with Rocket’s inappropriate urination for as long as you have. Most people wouldn’t do as much as you and your fiancé and probably would have given up on Rocket a long time ago.

Bella: We know from personal experience how frustrating inappropriate urination can be. You see, when Tara first moved in, she too was peeing all over the place!

Tara: Oh, come on, Bella! I was just scared and anxious!

Bella: I’m not saying that to be mean, Tara, it’s just that’s what happened. But Mama got you all sorted out, didn’t she?

Tara: Yes, she did. And here’s how she started. Much like you, D.C., Mama took me to the vet and had me checked out to make sure I didn’t have a health condition causing my problem.

Thomas: And that should always be the first step when you’re dealing with inappropriate urination. There are lots of medical things that could cause a cat to pee outside the box, urinary tract infections and crystals that cause painful urination are chief among them.

Tara: We noticed you said that Rocket’s peeing started again as soon as the antibiotics stopped, and that tells us that the antibiotics may not have gotten all the infection. So the first thing we want you to do, D.C., is to go back to the vet (we know, we know) and have them get a urine sample from Rocket. If they see bacteria in the urine, we want you to have them do a culture & sensitivity test. In this test, they grow the bacteria they found and then test different antibiotics on it to see which one will work best.

Thomas: We also want the vet to check for crystals in Rocket’s urine. These crystals can cause pain, which can cause a cat to avoid the litter box. If your vet does find crystals, follow their advice on how to make sure these crystals don’t keep on growing.

Bella: If Rocket’s urinalysis doesn’t show any bacteria or crystals, you can then be totally sure the problem is behavioral.

Thomas: We’re not sure how many litter boxes you have, but for two cats you should have at least two litter boxes. Why? Although Groot is an angel toward you, it’s quite possible that she’s “guarding” the litter box and preventing Rocket from using it. By having two litter boxes and placing them far away from each other, you can make sure Groot can’t guard both of them.

Bella: You can also try a litter that attracts cats. Mama’s sister uses a litter called Dr. Elsey’s Cat Attract, and she said it’s helped her cats use the litter box more regularly. In the U.S., Cat Attract is available at most pet stores and online.

Tara: Once you’re sure you’ve dealt with any medical issues Rocket may have, it’s time to clean. And clean like crazy!

Thomas: As you mentioned, your apartment is starting to smell like cat pee, which is always a problem with inappropriate urination. 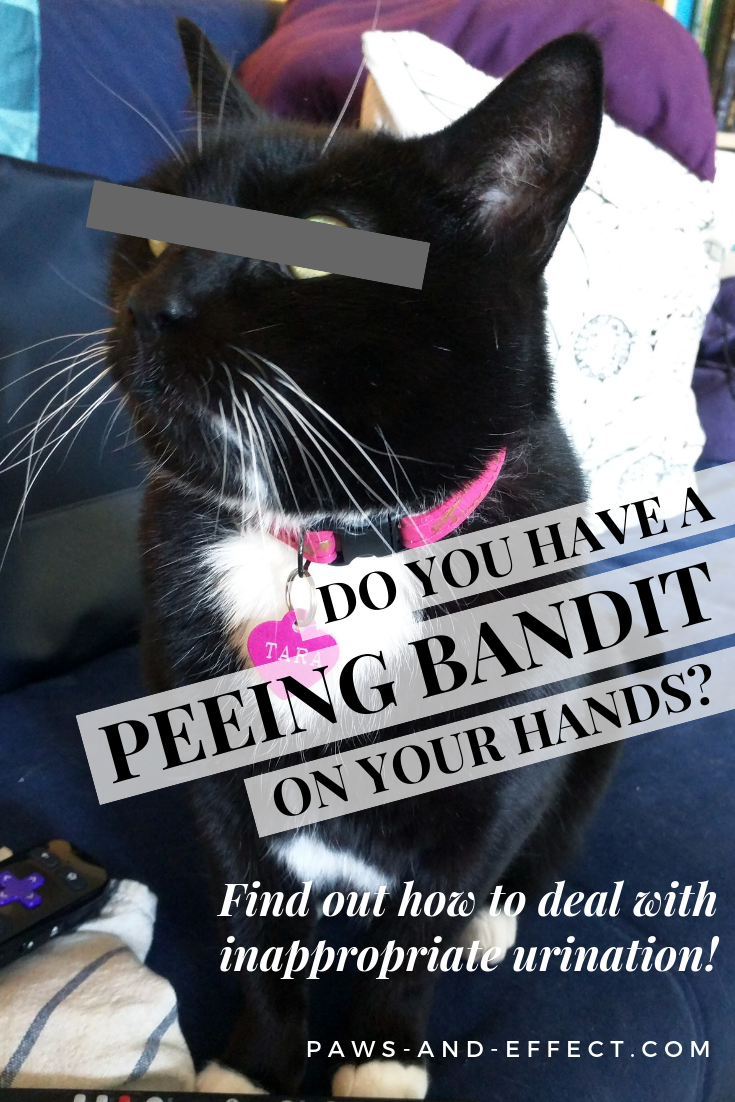 Bella: In order to thoroughly clean the places where Rocket has peed, you’re going to need some special products. The first thing you’ll need is a black light and some painter’s tape. Black light will cause urine spots to fluoresce so you’ll be able to see them. Darken each room and mark the peed-on areas with the painter’s tape–you’ll need that info for the next step. And don’t forget to shine your black light on the walls, up to about a foot off the ground. If Rocket is spraying as well as peeing, you could find stains on the wall, too.

Tara: Before doing the black light test (and you may be horrified by what you see), buy some cleaning products designed just for cleaning up cat urine stains and odor. To clean up the stains and smells I made, Mama bought a pet stain and odor removal kit by 123 Odor-Free. The people who designed this product are professional carpet cleaners, and they developed this formula through years of trial and error.

Thomas: 123 Odor-Free is supposed to work on any surface, from concrete to hardwood floors to rugs and carpets of all kinds of materials. Our apartment has wall-to-wall carpeting, and we can attest to how well the stuff works on carpets!

Bella: Another product you can use to clean and remove urine odors is Fizzion. This product, which we first heard about through celebrity cat behaviorist Jackson Galaxy, also does a lot to remove odors. Fizzion can be used on clothing and shoes, too.

Tara: Once you’ve got the pee stains marked with the painter’s tape, use whatever product you’ve bought to clean the stains and odor. Make sure you follow the directions to the letter for the best possible effect.

Thomas: Another thing you might consider is to put Rocket in a special place while you’re working or away from the house, where she can’t get out and pee all over everything.

Bella: Now, we don’t take this lightly, and we only recommend this in the case of the most hardcore of inappropriate pee-ers. 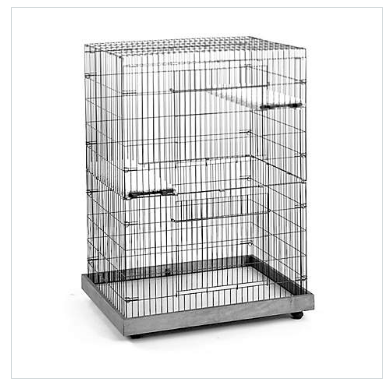 We don’t suggest this lightly, but
retraining may need to begin with a “cat house.”

Tara: You might consider getting a “cat house” for Rocket for when you go away or when your fiancé has to concentrate on work and doesn’t have time to chase Rocket all over the house to clean up after her.

Thomas: Put a litter box and a small bed in the bottom of the “cat house” and give her some toys to play with. We’d also recommend putting a sheet over the cat house so that Rocket can feel like she’s in a safe little cave. (Leave one side exposed, of course, so she can see what’s going on around her.)

Bella: Now, the crucial thing about using a cat house is that you must, must, MUST make sure Rocket doesn’t see this as punishment. Therefore, you want to make Rocket feel happy and special for going in there–do not be mad or raise your voice, and don’t put her in there right after she’s peed.

Tara: Maybe you put her in there after she eats her breakfast, and then she can be in “her” safe place and do her business there. Given that there’s not a lot of floor space in a cat house, it’s pretty likely that Rocket will use the litter box.

Thomas: But just in case she doesn’t, make sure the bed you get her isn’t super-expensive, so you won’t be upset if you have to throw it away.

Bella: We’re sure that if you do these three things–make extra-double-sure Rocket doesn’t have a UTI or crystals; get at least two litter boxes; and use the Cat Attract litter–you’ll go a long way to stop Rocket’s inappropriate urination.

Tara: What about you other readers? Do you have any tips for helping D.C. deal with her inappropriately peeing cat? Please share them in the comments if you do!

Chat With a Vet

This site collects information via the use of cookies and through our email subscription form. Please view our privacy policy for details on how we use your information.

We use cookies to ensure that we give you the best experience on our website. If you continue to use this site we will assume that you are happy with it.OkNoRead more
You can revoke your consent any time using the Revoke consent button.Revoke Cookies