I’m afraid my cat might have had rabies. Help!

I had a 9-year-old Russian Blue mix. He was an outside cat due to the fact that even though he was neutered, he still sprayed. I brought him in the house last night in a small kennel because the weather has been so bad. He was fine when I put him in. I picked him up and he seemed normal. But this morning when I went to put him back out, I found he had died during the night. He was laying as if he just died in his sleep. I knew he was getting older for a cat, especially since he was an outside cat, but I’m worried because was in a severe cat fight three weeks ago and I’m afraid he might have gotten rabies. There have been reports of rabies in my county, including a cat about three miles away. When I took him to the vet for care because the wounds on his shoulder abscessed, he was given antibiotic shots and updated on his immunizations (he had lapsed on his rabies shot, even though they told me last time I was there that he was up to date). Would my cat have shown signs of rabies if that is what killed him? I’m now afraid that perhaps whatever bit him gave him rabies and it killed him, therefore exposing my family. Am I worrying over nothing? His behavior had been 100% normal all the way up to last night when I put him in his kennel. Should I mention this to the vet? We buried the cat today, but should we have gotten him tested for rabies? I think it is odd he had this fight so close to his death.

Siouxsie: Well, Shelby, our research indicates that even if your cat was rabid, it’s highly unlikely that your family could have contracted the disease. But the best way to set your mind at ease is to call your veterinarian and ask him or her if it’s possible your cat might have been rabid. A professional’s opinion is a lot more authoritative than anything we could tell you here.

Thomas: Your question does give us a chance to share information about rabies, not only with you but with the rest of our readers.

Dahlia: This information comes from the Cat Owner’s Home Veterinary Handbook, which was written by three veterinarians and one human doctor.

Siouxsie: Rabies is a fatal disease that is found in nearly all warm-blooded animals. It is caused by a virus that spreads up the nervous system from an infected bite and eventually causes encephalitis, or swelling in the brain.

Dahlia: Rabies is caused by a virus which is found in the saliva of infected animals and is usually transmitted by a bite. However, saliva on an open wound or mucous membrane such as the inside of the nose or mouth can also constitute exposure to rabies.

Siouxsie: The incubation period in cats can be anywhere from nine days to one year, but usually signs appear within 2 to 3 weeks of infection.

Thomas: Because the virus travels to the brain along nerve networks, the farther the bite is from the brain, the longer the period of incubation. But the virus can be in the saliva glands within a week after infection, so animals can be contagious before they show signs of rabies — however, the writers of the Cat Owner’s Home Veterinary Handbook do point out that this is unusual. 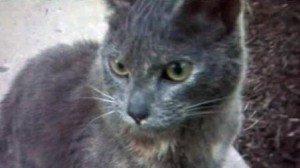 Dahlia: The symptoms of rabies are caused by the brain swelling we mentioned earlier. In the first stage, which lasts one to three days, the signs are very subtle — mostly changes in personality. A laid-back cat could become more irritable or aggressive and bite repeatedly at the site where the virus got into the body, or a shy cat may become overly affectionate.

Siouxsie: But then an affected cat becomes withdrawn and starts staring off into space. They avoid light and could hide and die without ever being found.

Thomas: There are two forms of rabies-induced encephalitis: the furious form and the paralytic or “dumb” form. A rabid cat may show signs of one or both. The furious, or “mad dog” form is far more common. It lasts two to four days, in which the infected cat suddenly attacks other animals or people around the face and neck. Soon the cat develops muscle twitching, tremors, staggering, lack of coordination, and violent convulsions. 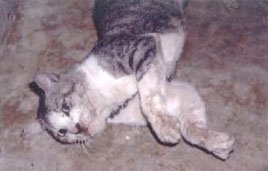 Dahlia: The paralytic form, which happens in about 30 percent of cases, causes the swallowing muscles to become paralyzed. A cat with paralytic rabies, drools, coughs, and paws at its mouth. As the condition progresses, the cat loses control of his rear legs, collapses, and cannot get up. Death from respiratory arrest happens in a couple of days. Because of the rapid course of the disease, paralysis may be the only sign people notice.

Siouxsie: If you or your cat are bitten by an animal of unknown rabies status, it’s crucial to vigorously cleanse all wounds and scratches. Wash them thoroughly with soap and water. Studies in animals show that prompt wound cleaning greatly reduces the risk of rabies. A wound from a possibly rabies-infected animal should not be stitched shut.

Thomas: A previously vaccinated cat that is bitten by an animal of unknown rabies status is given a booster shot, which should happen as soon as possible after exposure. The cat should then be keep confined indoors at home for 45 days. Even outdoor cats known to be up to date on their vaccinations should be kept indoors under observation for 10 days.

Dahlia: An unvaccinated cat bitten by a potentially rabid animal must either be euthanized or placed under strict quarantine without direct handling by humans or contact with other animals for six months. The cat is then vaccinated one month before he is released. If this seems harsh, remember that it could have been prevented if the owner had been responsible about the cat’s vaccinations.

Siouxsie: Different states have their own quarantine and vaccination regulations for cats that have been exposed to rabies, so be sure to check your local laws if you find yourself in this unfortunate situation.

Thomas: There is no effective treatment for rabies. Be sure your cat is properly vaccinated against the disease, under the supervision of a veterinarian.

Dahlia: We know there are a lot of people who vaccinate their own animals in order to save money and we’re not saying that it’s totally irresponsible to do this. However, in the case of rabies vaccinations, it’s crucial that they be done properly. And your vet can provide you with legal proof that your cat was vaccinated, should the need arise.

Siouxsie: Preventive rabies vaccinations are available for humans at a high risk of contracting the disease, including veterinarians, animal handlers, cave explorers, and lab workers.

Thomas: We suspect people who regularly work with feral cat colonies would also fall in this high-risk group.

Dahlia: Remember, the professionals have the last word about this! If your veterinarian or your physician says something different than what we’ve shared here, go with the medical professionals’ opinions. They’ve got all the latest information and years of professional training — and we’re just cats who are trying to help you understand health concerns and have the best possible relationship with your feline companion.