I Think My Cat’s Spine is Crooked

My 5-month-old cat has a pronounced curvature of the spine while sitting up straight: when he sits with his paws flat on the floor he has a hump right behind his shoulder blades. At first I wasn’t worried, but now I am thinking back to my previous cat, who I think had a much more gradually sloping back. I looked up cat pictures online and my cat’s seems more pronounced. Is there a chance this is a bad thing, or is it just a natural variance in cat spines? 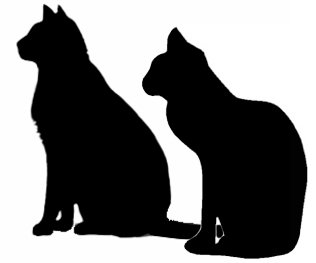 Siouxsie: There is some variation in the length of cats’ spines and the length of their body in proportion to their legs. These factors can cause a cat to look like he’s got a crooked spine when it’s really pretty normal.

Thomas: The silhouettes at the right depict normal sitting postures. As you can see, the cat on the right has a much more “humped” back than the one on the left.

Siouxsie: If your cat’s back has a bump when he’s standing, that would be an indication that there’s something going on with his spine. 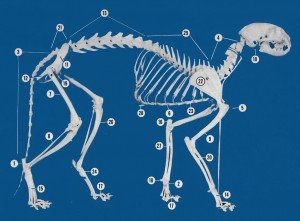 The skeleton of a cat.

Thomas: Let’s take a moment to talk about the anatomy of the spine. Both humans and cats have spines made up of lots of little bones called vertebrae, which are connected together with tendons, ligaments and muscles. All these little bones make us flexible. If we just had one great big bone in our backs, we would barely be able to move — in fact, we couldn’t even turn our heads!

Dahlia: Cats have 30 vertebrae, not counting the 20 or so that form the tail. For comparison, humans have 26. Those extra vertebrae are an important contributor to the amazing agility that makes us so beautiful and graceful.

Siouxsie: Although you humans are much more likely to suffer from back problems, thanks to that whole walking-on-two-feet thing, cats aren’t totally immune. We can suffer injuries or arthritis that cause us pain and impair our neurological function.

Thomas: It is rare, but cats can be born with spinal malformations, too. Improperly bred Manx cats, for example, can be born with a condition called spina bifida, which means the vertebrae don’t form properly and leave the spinal cord exposed.

Dahlia: If a mother cat is exposed to toxins while she’s pregnant, this can produce birth defects including improperly formed vertebrae and vertebrae that are fused together and don’t move like a normal spine.

Siouxsie: And sometimes a kitty just wins the booby prize in the genetic lottery and for no good reason ends up with a defect or a spinal curvature.

Thomas: Scoliosis is a side-to-side curvature of the spine. About 3 of every 100 humans have some degree of scoliosis, but it’s much rarer in cats.

Dahlia: We did find an interesting blog post on feline scoliosis by a breeder of Oriental Shorthair cats. Debbie Borner discovered that Shrimpbait, one of her kittens, stood crookedly. She took him to the vet, who did X-rays and found out that he had scoliosis caused by several fused vertebrae.

Siouxsie: The good news, as Debbie says in her article, is that the condition shouldn’t affect Shrimpbait’s lifespan or quality of life.

Thomas: If the curve did get worse, it might cause some loss of flexibility and difficulty in cleaning his butt, but that’s easy to deal with.

Dahlia: What it comes down to, Allie, is that it’s highly likely that your cat’s spine is not crooked, but that he just likes to sit in a way that makes him look bumpy.

Siouxsie: But if you’re concerned, I’d suggest you ask your vet about it the next time you take your kitty in for a checkup.

Thomas: Of course, if your cat shows pain when you stroke or touch him in that part of his back, or if he starts showing signs of neurological problems (having trouble walking or standing up straight) or weakness in the rear end, get to the vet right away.

Dahlia: We hope this helps to put your mind at ease, Allie.