How Long Does It Take for Ovaban to Prevent Pregnancy? 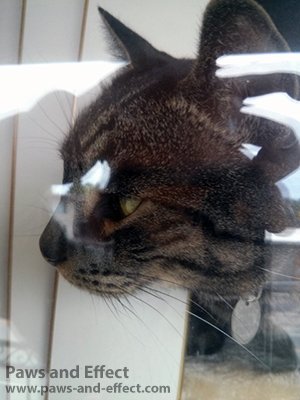 I have an unspayed female housecat. I had to bring a badly injured tomcat inside for treatment. I am keeping the two separated, but he is getting restless and it is getting harder to keep him restricted to the small room he is confined in, but he is not well yet and it is too cold to put him back outside. I have started my cat on 4mg of Ovaban twice a week. She has only had one dose so far; how many doses will it take before she cannot get pregnant if she accidentally meets up with the tom? Thank you so much for your help

Thomas: First of all, Ovaban (megestrol acetate) is not actually designed to prevent pregnancy. It’s designed to delay the onset of estrus — that is, to keep a cat from going into heat.

Bella: It does this in the same way a lot of human birth control pills work. It’s similar to the natural hormone progesterone, which, to put it in a very basic way, makes the body think it’s pregnant. Hey, Siouxsie, where are you? Siooouuuuux-sie … it’s time to write this week’s post!

Siouxsie: Mrff … urmph … what? Oh, yeah, this week’s post. *yaaawn* What were we talking about?

Bella: Ovaban and pregnancy and girl and boy cats!

Thomas: It’s okay, Siouxsie, we’ll give you a chance to catch up. So, Vicky, Ovaban is not going to stop your cat from getting pregnant; it’s just going to keep her from going into heat. And it’s only available through veterinarians or by prescription from a veterinarian.

Bella: That said, Ovaban should not be used as a long-term contraceptive because there are some fairly significant potential health risks. We don’t know if your vet talked to you about these, but we hope she did.

Siouxsie: According to the fine folks at PetPlace, one of the most serious risks arising from the use of Ovaban is that it increases the risk of uterine infection. This infection, often referred to as pyometra, can be fatal.

Thomas: Because Ovaban has steroid-like effects that can weaken the adrenal glands to the point where the body fails to produce necessary hormones, it can lead to symptoms of Addison’s disease. These symptoms include lethargy, lack of appetite, shaking, low body temperature, vomiting, weight loss, blood in the stools, hair loss, and excessive urination and thirst. Those symptoms can start just a few weeks after beginning treatment with Ovaban!

Bella: And because of the steroid-like effects, it can produce transient diabetes as well. And let me tell you, diabetes is no fun!

Siouxsie: Our biggest question is, what prompted you to try Ovaban rather than having your cat spayed? Even if you don’t have an intact tomcat in the house and your cat never manages to escape when she’s in heat, leaving a female cat intact dramatically increases the risk of cancers of the uterus, ovaries and mammary glands.

Thomas: Also, recurring episodes of estrus can lead to behavioral problems including inappropriate urine marking and stress-based behaviors like hunting, scratching and biting.

Bella: And when an unspayed female cat doesn’t get bred, the cycles of heat get closer and closer together until the cat is almost constantly in heat. That’s a truly miserable experience for both you and the cat!

Siouxsie: Having an unspayed female in the house is also going to provoke the tomcat into spraying, which is also miserable and stinky.

Thomas: We’re not sure why you would choose to pay for medications but not for a spay. Trust me, Mama works at a pet health insurance company and she knows how much it costs to treat diabetes and Addison’s disease. Just one vial of insulin can cost more than $200.00, and the ongoing need for supplies and blood tests will add up very quickly. Having your cat spayed at a low-cost clinic is chump change compared to the treatment of chronic diseases.

Bella: If you are concerned about the cost, though, SpayUSA has a huge listing of free and low-cost spay/neuter resources all across the U.S.

Siouxsie: So while we can’t tell you for sure how long it’s going to take for the Ovaban to be completely effective, we’d very much encourage you to do some more research about the potential issues with long-term use, and please have your kitty spayed (and the tomcat neutered before he goes back outside).

Thomas: What about you other readers? Have you ever used Ovaban for your cats? Do you know more about the length of time before it becomes effective in pregnancy prevention? Please share your tips in the comments.