How Can I Stop My Cat From Yowling?

I have a 9-month-old male cat. He’s been an inside cat since I got him — other than a few overnight outings when he’s gotten out an open window or a door left open half a minute too long. My only problem with him is his yowling. His meows vary from a normal meow to a deeper-toned one that almost echoes in the hall. I leave a window open for him so he can enjoy the outside world even though it reaches -40 outside during the winter. I’ve bought him every toy imaginable, keep his bowls filled and his litterbox clean. I also give him as much attention as possible; I even pet him before I pet the dog when I get home from work. My roommate is getting ticked about the crying, and now my girlfriend is saying she wants his manhood reduced by 2/3. As far as I’m concerned, they’re not mine to take, so he can keep them til he sprays one time. Any ideas as what to do for him other then letting him be an indoor-outdoor cat? 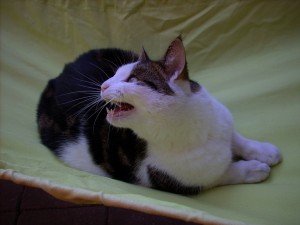 Siouxsie: The kinds of meows and howls you describe are made by sexually mature tomcats when they detect the alluring aroma of a female cat in heat.

Thomas: I know you’re not going to want to hear this, but the only way you’re going to be able to stop that noise is to have your cat neutered.

Dahlia: Mama knows some guys that have hangups about having their male animals neutered. We don’t know what that’s all about. Mama says she’s never met a lady who refused to have her cat spayed because she’d be robbing her “poor kitty” of her womanhood.

Siouxsie: First, you need to understand that cats don’t have the same perceptions about sexuality and manliness that humans do.

Thomas: I can speak about this from personal experience. I’m neutered, and I got fixed when I was less than a year old. It hasn’t made a single bit of difference to me. The only thing that bothered me about it was that I had to go to the vet and it hurt to sit down for a day or two afterwards.

Dahlia: And believe me when I say that my gorgeous Thomas is just as manly as any boy cat I’ve ever met! He just has better manners.

Siouxsie: Well, Dahlia, even through all that obnoxious fawning, you do make a good point: Neutered cats make much better housemates. They don’t cry all night, they don’t spray, and they don’t try to fight with every other cat in their house.

Thomas: Another important thing to know, Junior, is that by not having your cat fixed, you’re putting him at risk for some serious problems. Not only might he get hit by a car when he gets out, as you fear, but when he starts fighting with other tomcats over females in heat, he could get seriously injured by those cats! These injuries can lead to abscesses and can even result in your cat getting feline immunodeficiency virus (FIV) or feline leukemia (FeLV).

Dahlia: Let us tell you a story about a cat we once knew. Kitty Jim’s man “couldn’t stand getting his balls cut off” and never had him neutered. Because of that, Jim was the classic fighting, screaming and — well, you know — tomcat. When Mama finally convinced Jim’s man to get him neutered (after he bit Thomas, Sinéad and Siouxsie), she also had him tested for FIV and FeLV. Unfortunately, he came up positive for FIV. Because he was so aggressive, he was literally a public health hazard for other cats.

Siouxsie: And we all had to get tested for FIV and FeLV all over again! I was so mad!

Thomas: Mama worked with her vet to try and place Jim in a home with other FIV+ cats, but nobody wanted an aggressive cat. No shelter would take him because he was known to have FIV. The man’s lifestyle didn’t allow for keeping Jim confined until he mellowed out. Long story short: his man made the heartbreaking decision to have him put to sleep.

Dahlia: We’d hate for your cat to meet a similar fate.

Siouxsie: One more thing — it’s a better idea to get your cat neutered before he starts spraying. Once he starts, he may get in the habit, and trust us when we say you don’t want that!

Thomas: While it’s true that neutered-kitty spray is much less pungent than tomcat spray, it’s still a habit humans don’t like.

Dahlia: Even after you have your little man fixed, it’s going to take a couple of weeks for the testosterone to completely leave his system — so his spray will still reek for a while after the surgery.

Siouxsie: Right now your cat is very stressed. Because his sex drive is awake and he can’t leave his house (unless he escapes), his body is sending him all sorts of crazy signals that he can’t do anything about. That level of tension is not good for his health.

Thomas: Because he’s so stressed, we’d recommend that you invest in a Feliway diffuser and place it in the room where your cat hangs out the most. This “happy cat pheromone” product will help to reduce sexual stress and will also help him be calm after he comes home from surgery.

Dahlia: It seems to us that you’re doing your best to give your cat everything he could possibly want, and you’re a very good cat caretaker. We hope you can overcome your personal issue about having your kitty neutered: he will be a much better housemate once his hormones calm down.

Siouxsie: That’s right, Dahlia. We hope this helps, Junior. Good luck to you and your kitty.

Thomas: And remember, real men have their pets neutered!