How Can I Keep My Cat From Scratching on Everything? 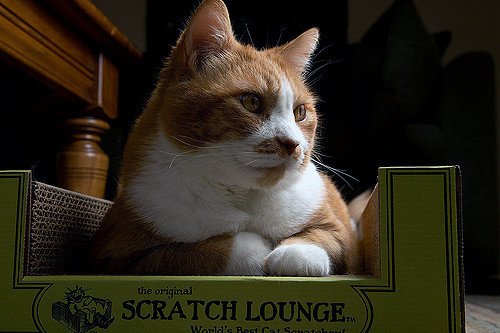 So my boyfriend and I just got a shelter cat last week and we love him to death and he is perfect and well behaved, except we cannot get him to scratch anything we have bought for him. We tried putting catnip on both the the scratchers we bought but he won’t even try. I keep catching him trying to scratch things around the apartment and as soon as I say “No” he stops and runs away, like he knows he’s not allowed to do it, and I haven’t caught him trying the same thing twice. I think he’s looking for what he is allowed to scratch, but he just won’t try what we bought him. We bought him two different kinds so far (Cardboard and a grass thing) at two different angles and still nothing. Advice?

Thomas: Well, it’s good that your kitty is looking for appropriate places to scratch, and we think we can help!

Bella: The first thing you’ll need to do is to see what your cat’s favorite scratching locations have in common. Are they vertical (like your couch, a chair, or your blinds)? Or are they horizontal, like your carpets?

Tara: If he scratches both horizontally and vertically, is there anything about the texture that those surfaces have in common?

Thomas: You do say he’s scratching things around the apartment — are those things near windows or doors? If so, he may be scratching to mark territory.

Bella: In addition to stretching and maintaining the claws, territory marking is one of the most important things about scratching.

Thomas: That’s right. A vertical scratcher needs to have enough weight at the bottom so it won’t tip over when the cat tries to use it. It also needs to be tall enough that your kitty can get a really good stretch. There are some really good tall sisal ones and wall-mounted cardboard ones. (Note: We have not used the cardboard scratcher, but the link to the tall sisal scratcher goes to one we’ve used and liked.) 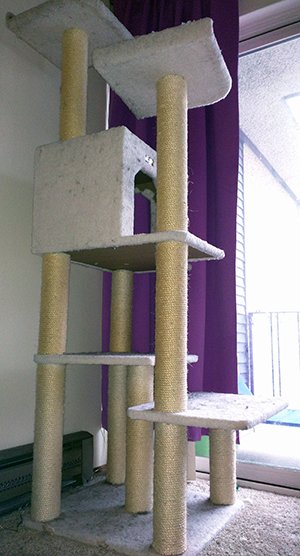 Our cat tower and scratcher

Bella: Mama bought us a cat tower that has sisal wrapped around the vertical posts so we can use that as a scratcher as well as a climber. It’s nice and heavy, so Thomas and I can get a great scratch when we want it.

Tara: Someday maybe I’ll scratch it too. I’m doing really good! I’m so brave that I’ve come out into the living room.

Thomas: She is spending most of her time under the couch, but she’s starting to explore. I’m really proud of you, Tara!

Tara: You are? But I’m scared of you!

Thomas: You don’t need to be. I’m a nice kitty. Sure, I’ll eat your food sometimes, but that doesn’t mean I don’t like you.

Tara: Please stop eating my food. I know Mama’s been good about helping you stay away from me so I can eat.

Bella: In any case, Jean, you may want to get yourself something like the scratcher Mama got us because then your cat can use it as vertical territory as well as a scratcher!

Thomas: And about the catnip — does your cat like catnip anyway? Some cats don’t, and that may be why he’s not so attracted to the scratcher by the catnip.

Bella: Catnip also varies a lot in freshness and potency. Most catnip sold at pet stores has been sitting around long enough for those oh-so-luscious volatile oils to evaporate out. We’d recommend trying some fresh, local catnip and see if that helps.

Tara: Another thing you can do to get your cat interested in a scratcher is to run your fingernails along it until your kitty digs in and starts using it. Playing with an interactive toy and getting it on the scratcher can also lure him to the right place. When he does scratch on the scratcher, even if it’s just a tiny half-scratch, give him lots of praise and positive reinforcement.

Thomas: We’d recommend asking the shelter what kind of scratching posts and surfaces they use. If your cat sees something he’s used to, he may be more inclined to use it.

Bella: You may also want to learn how to trim your cat’s nails, so even if he does scratch your furniture or carpets, the damage will be minimized.

Tara: It’s easier than a lot of people think — at least for most cats! This video is super-helpful if you’re a first-time claw trimmer:

Thomas: Between claw trimming; getting a nice, tall scratch post; and locating the scratching surfaces in the places your cat wants to use them, you should be able to get your cat trained to scratch the right things and not the wrong ones.

Bella: What about you other readers? What have you done to help your cat learn how to scratch in the right places and not scratch in the wrong ones? Please share your stories in the comments!